THE WEST SUPPORTS THE MIDDLE EAST? 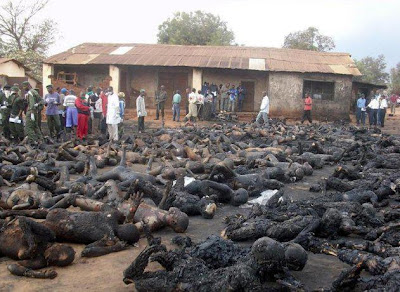 This (see picture below) is the 'religion' that the West supports in the Middle East. Mubarak, who was friendly to Christians in Egypt, was told he had to leave. Obama and the rest of the Western leaders insisted on this. Ghadaffi, another Christian friendly leader, was also told to leave and when he fought the jihadists, he was brought down by NATO.
Hillary cackled with laughter when she heard of his brutal torture and death at the hands of his--and our--enemies. You see, our enemies are now our 'leaders.'
Since the Arab Spring, hailed as a glorious democratic grass roots movement, Christians in these countries are being forced to leave for fear of being murdered.
Now your Western 'leaders' are coming after Assad, the last Christian-friendly leader left in the region. And you are supposed to believe he will be replaced by people who, to quote candidate Romney, 'share our values.' But Al Qaeda and other like groups are emerging as the new leaders in Syria.
How can America lift her head with pride knowing that our tax money and our military are supporting the ideology that burned the Christians whose charred remains are shown below?
The nation that wept over the horrors of Hitler's gas chambers is turning a blind eye to the savage murders of people who truly share our values and our faith.
BTW, I was able to verify this story by going to the Spanish language site where the original text appears (see below this commentary). Nigerian Christians have had their churches burned by the local Muslims for many years so this is nothing new. It just happens to be perhaps the first time a photo of the charred remains has been sent to the public. But note that Facebook banned it on their social media and the world msm will remain as silent as the sphinx as long as they can. Their silence is consent. They are complicit in murder.
This is the way all totalitarianism starts, with the full support of sold-out media. But this time, it is worldwide.
The conditions for Armageddon--the very one mentioned in the Bible--are coming together like never before in world history.
There is no longer a city on a hill to look to for help. Our only hope is in God, where it should have been in the first place.
http://www.religionenlibertad.com/articulo.asp?idarticulo=25283
Make this viral.
Don Hank
Posted by butlincat at 3:08 am