"High Court judges are in line for a whopping £27,000 pay rise despite austerity across public sector" costing £3million/year to the tax-paying public! - Daily Mail 16 Nov. 16 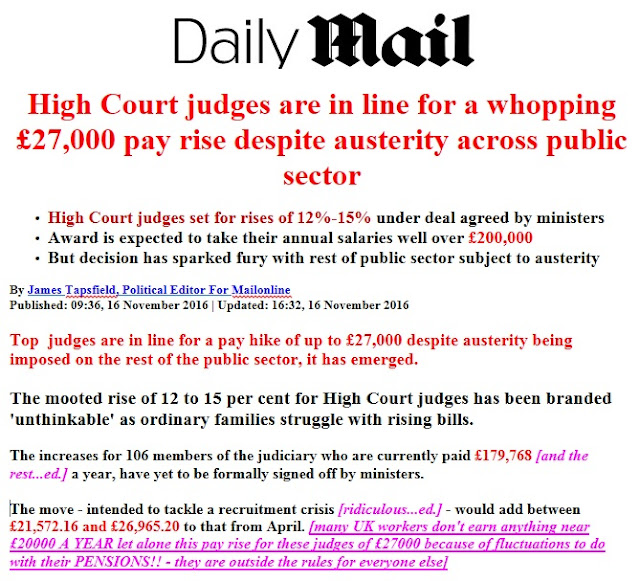 Copy link to paste in your message
Sir Nicholas Mostyn and Sir Roderick Newton are among the judges suing the government
It will cost taxpayers up to £3 million annually, according to The Times, and is many times more than the average 1 per cent limit for the public sector as a whole. [UTTER UNJUSTIFIED and outrageous FAVOURITISM! For example they are cutting / downgrading amd rearranging SS benefits whereby citizens suffer as a result eg. financially, and all that goes with that, yet these government employees who receive astronomical salaries anyway are getting undeniable special treatment...ed.]
John O'Connell, chief executive of the TaxPayers' Alliance, told the newspaper: 'The sheer scale of this payrise is bound to raise questions as colleagues across the public sector face only a modest pay rise — if they are lucky.
'To families struggling with rising bills, a pay rise of this magnitude will be unthinkable.'
Christina McAnea, head of health at the union Unison, said: 'NHS staff will be hoping this signals an end to the government's squeeze on pay.


'Health and other public service employees' wages have been frozen or capped for years, causing real financial hardship.'
The scale of the increase only emerged during a tribunal where six judges are suing the Lord Chancellor over changes to their pension scheme.
The claimants say they were appointed to the High Court at a 'relatively early age' and were being discriminated against after the introduction of 'highly disadvantageous' new retirement arrangements.
The case, being heard by the Central London Employment Tribunal, has been brought by Sir Nicholas Mostyn, 59, Sir Roderick Newton, 58, Sir Philip Moor, 57, Dame Lucy Theis, 55, Sir Richard Arnold, 55, and Sir Rabinder Singh, 52. The judges bringing the case - who include Sir Philip Moor (left) and Dame Lucy Theis  (right) - claim the new pension scheme is discriminatory
Younger judges are either automatically enrolled on to the new scheme, which the claimants' lawyers say is less favourable in terms of benefits, or come on to it after a transitional period.
Counsel for the judges Michael Beloff QC said the pay rise was to compensate the judiciary for a £25,000 tax charge they suffered by having to move into a new pension scheme.
Mr Beloff said all the claimants were appointed to the High Court bench between 2008 and 2014.
He said: 'All of course are high flyers ... which explains their appointment at a relatively early age.' Lord Chancellor Liz Truss is contesting the employment tribunal brought by the judges
He said judges within 10 years of retirement were protected from the changes, whereas the younger set were exposed to the 'highly disadvantageous' scheme.
Mr Beloff said the Government's alterations were to the younger judges' 'substantial financial detriment' and affected compensatory benefits that could have contributed to the decision to give up a career as a successful barrister.
He said: 'None of them could've had any inkling that those changes would be made.
'They're all, in a real sense, in a trap.'
The tribunal also heard a career as a judge was 'a one-way street' because one could not return to the bar or act as a solicitor again after being appointed.
As well as age discrimination, they claim there is indirect race and indirect sex discrimination under the scheme, saying women and ethnic minorities tend to be under-represented in the judiciary and the scheme acts as a disincentive.
The conditions imposed on the younger judges were at odds with a 'fundamental constitutional principle' that the pay of serving judges should not be diminished during their term in office, Mr Beloff added.
But the tribunal heard the respondents opposed these arguments, claiming the pension entitlement changes did not infringe the constitutional edict the judiciary be free of 'influence by the executive'. Copy link to paste in your message
The case of the six judges, who also include Sir Richard Arnold and Sir Rabinder Singh, is expected to last two weeks in the employment tribunal
Counsel for 204 other judges also involved in the case, Andrew Short, QC, also suggested the idea older judges should be spared changes because they have less time to adjust before retirement was illogical because the older appointees would, by this measure, be exposed to the changes for a shorter period of time.
Mr Short also questioned the first witness, treasury official Julian Kelly, about whether he agreed the changes introduced in 2015 had a 'disproportionate impact' on judges compared to other public servants.
'I don't think that the change to the pension scheme itself had ... a materially different impact on judges as opposed to others,' Mr Kelly replied.
In his opening remarks, Martin Chamberlain QC, for the Lord Chancellor and the Ministry of Justice, said there was no constitutional principle requiring sitting judges to be insulated from adverse pension changes when other public servants were not.
He told the tribunal it was legitimate to enforce a transitional protection period for those judges who, being closer to retirement, were more likely to have made 'concrete plans' about their financial futures based on the existing scheme.
He also outlined alternatives considered by Government prior to legislating the changes, including an 'expensive option' of staggering their introduction.

The pay rise is to compensate judges for having to move into a less favourable pension scheme, a tribunal was told [so the taxpaying public has to pay fot it?...ed.]/Getty Images


High Court judges are in line to receive a pay rise of 12 to 15 per cent, angering other public servants and trade unions.

The rise is designed to tackle a recruitment crisis and will cost taxpayers between about £2.5 million and £3 million extra when the public sector faces an average 1 per cent pay increase.
John O’Connell, chief executive of the TaxPayers’ Alliance, said: “The sheer scale of this pay rise is bound to raise questions as colleagues across the public sector face only a modest pay rise — if they are lucky. To families struggling with rising bills, a pay rise of this magnitude will be unthinkable.”

Christina McAnea, head of health at the union Unison, said: “NHS staff will be hoping this signals an end to the government’s squeeze on pay. Health and other public service employees’ wages have been frozen or capped for years, causing real financial hardship.”

Details of the pay rise emerged at a tribunal where six judges are suing Liz Truss, the lord chancellor, and the Ministry of Justice (MoJ) over changes to their pension scheme.
Michael Beloff, QC, acting for the judges, claimed that the pay rise was to compensate High Court judges for the £25,000 tax charge they suffered by having to move into a new pension scheme which “significantly depressed their income”. He told the central London employment tribunal it was “irrelevant” that there may be a need to curb public spending or that judicial pensions were higher than those of other public sector workers.

For the first time judges have to contribute to their pensions under reforms that they say will cut their pension pot by 25 per cent over 20 years. Judges born after 1957 are hit hardest as they lose their original pension rights and have to join a far less favourable scheme along civil service pension lines.

They claim that the pension scheme, introduced in April last year, penalises them on the basis of their age and in some cases on race and sex.

Mr Beloff said judges within ten years of retirement were protected from the changes, whereas the younger set were exposed to the “highly disadvantageous” scheme. The question for the tribunal is why one group of High Court judges (the younger ones), doing the same work, has been treated differently and less favourably than another, “simply because of their date of birth”.

Lord Thomas of Cymgiedd, lord chief justice, recently warned of the recruitment crisis, with High Court vacancies left unfilled. He said judges had been affected by successive years of pay restraint and a “very significant fall in pay and pensions in real terms”.

Martin Chamberlain, QC, for the lord chancellor and the MoJ, said there was no constitutional principle requiring sitting judges to be insulated from adverse pension changes when other public servants were not
.
What they earn

source: http://www.thetimes.co.uk/article/judges-set-for-15-per-cent-pay-riseto-tackle-recruitment-crisis-wljxdnkzc
Posted by butlincat at 4:41 am