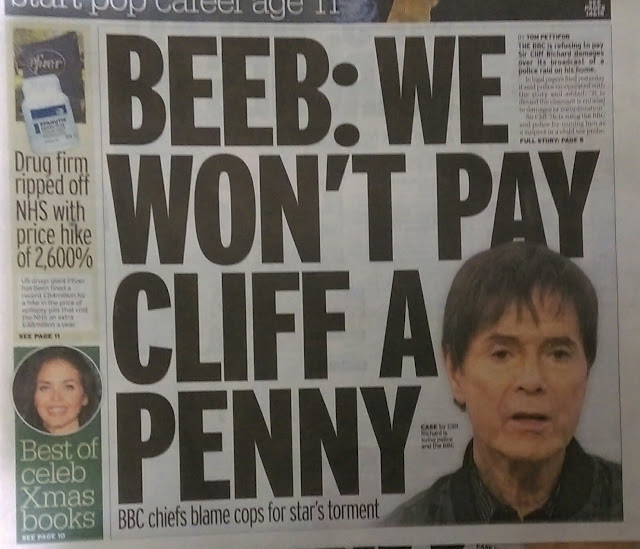 
The broadcaster is is refusing to pay anything and insists the case was in the public interest in the wake of the Jimmy Savile scandal.

Is Cliff Richard a Paedophile?

Baldy Cliff Richards
Without seeing the evidence the police and the Crown Prosecution Service has on him it’s hard to answer the question; is Cliff Richard a Paedophile?
As always when I put up a post that questions the morality a major celebrity regarding child abuse the supporters come rushing out protesting their hero’s innocence. They accuse me of “making it up”, “cashing in”, “jumping on the bandwagon” or similar old chestnuts.
“Oh, picking on cliff now, Wots the world coming too, he’s a good Christian he would never do a thing like this, it’s a load of crap, don’t Beleave things u read, leave cliff a lone,” – Ros cheal (The above comment is real, bad English, and all.)
“And how many people are coming forward to try and cash in on this type of thing let the truth come out and if you do want to try and cash in on lies …………. they should be the ones whom go to jail and get named and shamed” – John

Who is “cashing in”? How will “the truth come out” if the journalists don’t tell the world and put pressure on the authorities?

“i think we should all wait for the final verdict the truth WILL come out as to who it realy is behind the mask” – christine filer
Christine like most people is deluding herself; she thinks the police, judiciary, the courts and the government are there to make sure we all get justice.
Wake up sheeple. There are no knights riding white chargers in those organisations; at least no one that can battle through the wall of corruption. Many individual journalists, bloggers and activists pressure the Establishment to do something, without them we would see even less justice.
The child abuse epidemic
Here is a comment that I applaud from a genuine, open-minded person who doesn’t want her celebrity icon to be guilty but understands reality:
“I really hope that it isn’t true, but as we have seen of late the bigger the celebrity, the more chances they have, and it only takes one person to come forward before others are brave enough to come forward as well.” – Angel Cooke
I wish it weren’t true too, not that I am a fan of the Elvis-wannabe-aged-crooner. However, the seeming epidemic of child abuse that has blighted the lives of those victims who were ‘lucky’ enough to survive is now exposed.
Super-Injunctions, what have they got to hide?
The reasons the mainstream media (MSM) continues to cover up or ignore the crimes of the wealthy and powerful are many. Firstly, paedophiles also infest the MSM as it can provide a relatively substantial income. Wealth gives access to the children through bribes and favours and serves to protect the perverts through the use of legal threats, D-notices, and super-injunctions. The MSM is running scared of lawsuits.
Super-injunctions are used by the wealthy to prevent the MSM from publishing KNOWN and PROVEN facts about rich criminals. Crooked lawyers with the connivance of equally corrupt judges have devised these money-making legal instruments to stop the publication of damaging facts about their immoral clients. It doesn’t prevent the police investigating and building a case but without the pressure of an unbridled press, they choose easier targets.
The BBC
The BBC is a breeding ground for paedophilia. Dominated for decades by Jimmy Savile, a weird clown with no talent, children flocked to his shows like Top of the Pops and Jim’ll Fix It, and the pervert took full advantage of his status. As did Rolf Harris whose programs were also attractive to children.
Many more famous BBC personalities and personnel have already been convicted, and there are many more yet to surface. What is it about the entertainment business that triggers paedophiles to flock to it? Probably, it is celebrity culture, where ordinary humans are adored by the masses just for being famous. Just read the comments to the articles on The Duck Shoot blog about famous paedophiles to get what I mean. It’s sickening!
The Cliff Richard secret
Cliff Richard obfuscated about his sexuality for years, and he has never directly confirmed or denied he is gay. When he was young, it was essential to deny one’s homosexuality, because the sexual act between men was illegal. Ridiculous I know, but those were very different times. In England and Wales the Sexual Offences Act 1967 “decriminalised homosexual acts in private between two men”. Scotland and Northern Ireland had to wait until 1980 and 1982 respectively.
Just why we’re made the way we are remains a mystery. I am heterosexual, but why? What determines our sexuality? All that bollocks about gayness being ‘unnatural’ is gradually being assigned to the rubbish bin. There are people who still believe it is a sin, an abomination; mostly religious people who quote an ‘ancient’ book ‘written’ by an ‘imaginary friend’ they call God.
This biblical fact begs the question, how sincere are pious Cliff Richard’s religious utterances? He claims to be a Christian, but the Christian scriptures say sticking the penis up the anus is a mortal sin, and that, by the way, applies to heterosexuals too.
Personally, I accept that persons of the same sex can be in love, or just desire each other. Lusting after kids is entirely a different matter, however.
Sex with male children
So, being gay may be one of Cliff’s secrets but there are many more and the secrets I am referring to are his predilection for sex with boys below the age of consent. Now I’m not sure what methods of sexual abuse he got up to, and if the case gets to court, we will learn the gruesome facts. Many paedophiles restrict their abuse to oral sex, touching and finger penetration, but giving and getting blowjobs with underage boys is no less disgusting than the difficult and painful act of anal penetration.
Of course, these facts equally apply to the abuse of female children, but unlike Jimmy Savile, who abused boys, girls, adults and dead people, Cliff Richard probably confined his abuse to males.
For the police, his victims’ being underage is complicated by the changes in the age of consent over the time Richards has been abusing boys. The other factor is, even if over 16 the present age of consent were they agreeing? Or, were they pressured, forced or tricked? Having sex with a 10-year-old is never consensual, though, is it?

Elm Guest House
One place in London that terrifies Richard the most is the Elm Guest House. The Elm Guest House in Rocks Lane, near Barnes Common in South West London was a private paedophile’s club back in the 1970s and 80s. The often videoed orgies of rape of young boys by adult men and Richard was a frequent guest.
So was Leon Brittan a former Tory Home Secretary, Cyril Smith former LibDem MP now dead, Anthony Blunt the Soviet spy, Peter Hayman a diplomat and knight of the realm. Many others are Tory MPs, a Labour MP, and a Sinn Féin politician.
Richard is rumoured to have taken out a super-injunction specifically relating to the Elm Guest House. Why?
Video evidence, which the Met police have, puts him at the premises. Super injunctions are expensive, and you don’t stake that amount of money unless you have something to hide. Cliff does have something to hide; he is a paedophile. 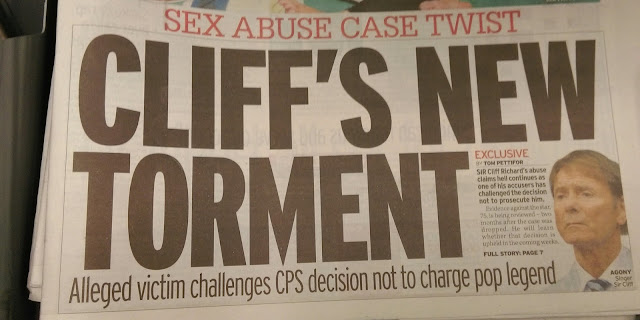 Posted by butlincat at 4:37 pm