Another Nickel In The Machine

A blog about 20th Century London

Soho and the fall of the Dirty Squad (updated) 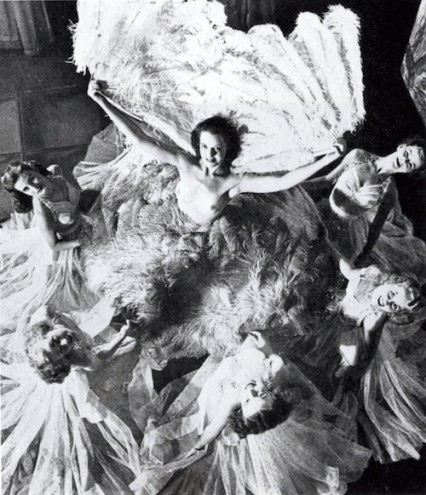 Windmill Theatre, Tonight and Every Night 1952
For over 200 years Soho has always had a somewhat racy reputation. Prostitution had always been relatively open in the area at least until the Street Offences Act of 1959.  However the number of sex-shops had always been relatively few but rose from just a handful in the early sixties to almost sixty by the early seventies.
It seemed at one stage that they were almost taking over the area. That there was corruption in Soho – essentially collusion between the ‘pornographers’ and the police in the late sixties and early seventies was an open secret amongst journalists, lawyers and the police themselves; although not many vaguely knew the extent of it. 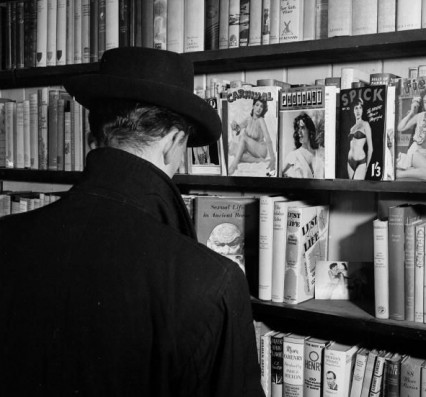 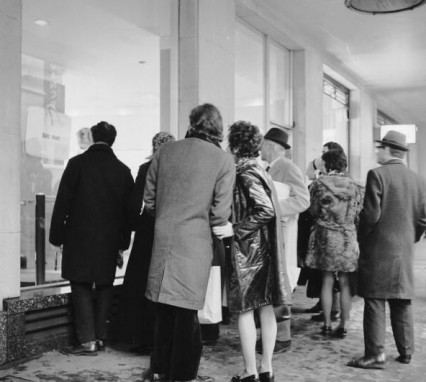 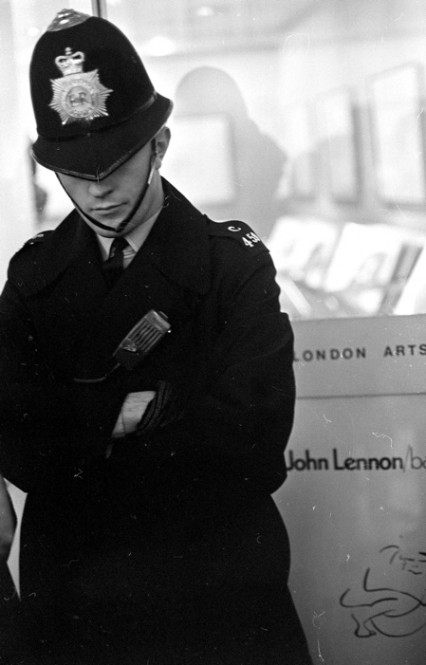 A policeman hard at work on duty outside Lennon's Bag One exhibition at London Arts gallery 1970
Soon after the closure the Director of Public Prosecutions received a letter from a member of the public, a Mr P.F.C. Fuller. The letter warned that if the court case went ahead art collections throughout the country could potentially be in trouble, including, he suggested even the Queen’s. In his letter Fuller wrote; 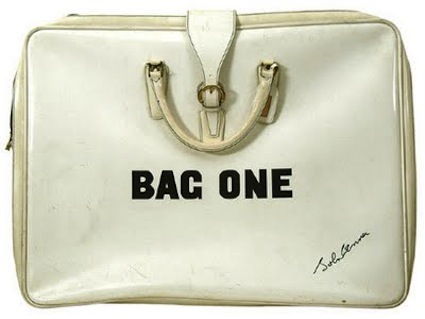 Only 300 of these bags were made. The John Lennon lithographs were placed inside. 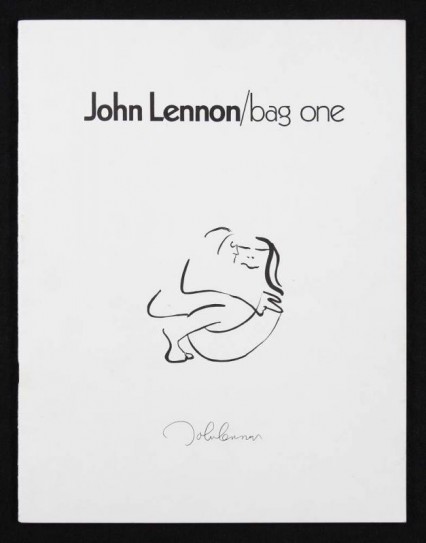 The Bag One exhibition programme cover 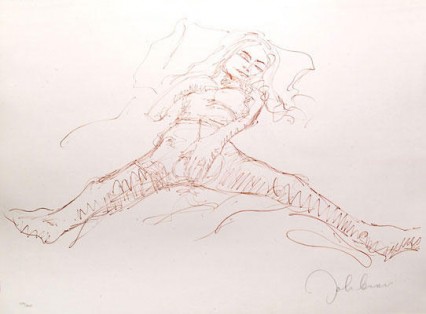 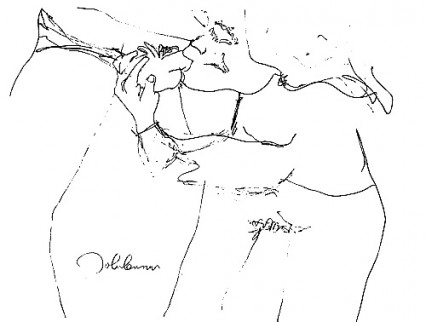 John once said "If art were to redeem man, it could do so only by saving him from the seriousness of life, and restoring him to an unexpected boyishness."
The summons alleged that the gallery had “exhibited to public view eight indecent prints to the annoyance of passengers, contrary to Section 54(12) of the Metropolitan Police Act, 1839, and the third schedule of the Criminal Justice Act 1967.”
When the case came to court several months later, a Picasso lithograph and a catalog of Picasso drawings were produced at Marlborough Street Magistrates’ Court for comparison with John’s prints. Detective-Inspector Patrick Luff, of the Central Office, New Scotland Yard, said that when he went to the gallery on January 15 about forty people were viewing the prints. “I saw no display of annoyance from the younger age group, but one gentleman was clearly annoyed,” he said.
Mr. St. John Harmsworth, the magistrate, asked: “Did he stamp his foot?” “Anger was registered on his face,” Inspector Luff replied. The case was dismissed when the magistrate decided that John’s prints were “unlikely to deprave or corrupt.” 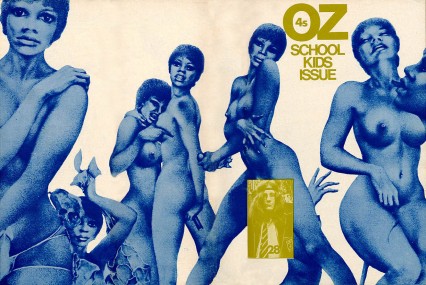 The cover of the infamous schoolkids issue of Oz
In the same year as the gallery closure and after it was accused of losing touch with their younger readers, the satirical magazine Oz reacted by inviting actual schoolchildren to edit a forthcoming May 1970 issue. It quickly became known as the Schoolkids’ Oz.
The magazine’s offices had already been raided several times by the The Obscene Publications Squad (known colloquially at the time as The Dirty Squad) but the bringing together of schoolchildren and, what some considered obscene material, soon led to arrests of Oz’s actual editors. 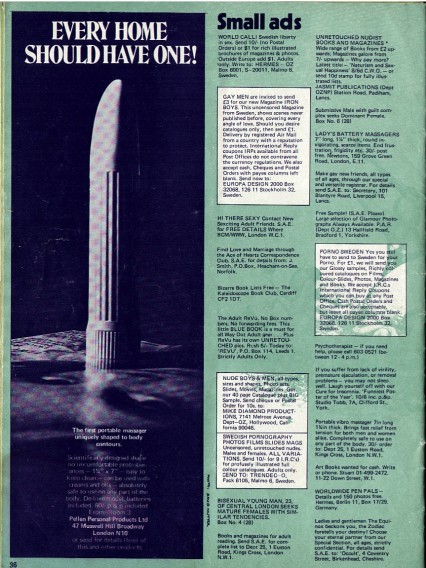 Page 36 of the Schoolkids' issue of OZ magazine.
The infamous Oz obscenity trial took place in 1971 with the defendants charged with ‘conspiracy to corrupt public morals’. The magazine’s defence lawyer, the late John Mortimer QC announced at the opening of the trial

[this] case stands at the crossroads of our liberty, at the boundaries of our freedom to think and draw and write what we please.

However according to the prosecution at the trial the magazine: 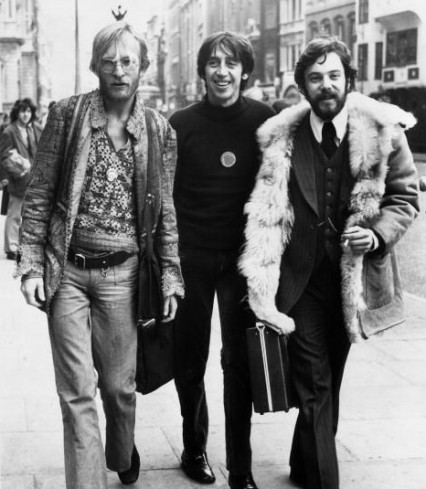 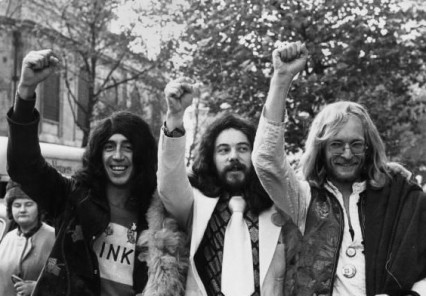 The wig-wearing Oz editors celebrating the quashing of their conviction. November 1971
At the conclusion of what became the longest obscenity trial in British legal history, the “Oz Three” editors, Richard Neville, Jim Anderson and Felix Dennis were found guilty and Neville and Anderson were sentenced to an incredible 15 months in prison. Dennis was given a lesser sentence because the judge, Justice Michael Argyle, considered that Dennis was “very much less intelligent” than the other two defendants.
Soon after the verdicts were announced the three men were taken to prison and had their heads shaved. In the early seventies long-hair was still seen as very anti-establisment and the shaving was an act that was intended to (and apparently did) cause an even greater stir to a lot of people than the already considerable outcry surrounding the trial and verdict. 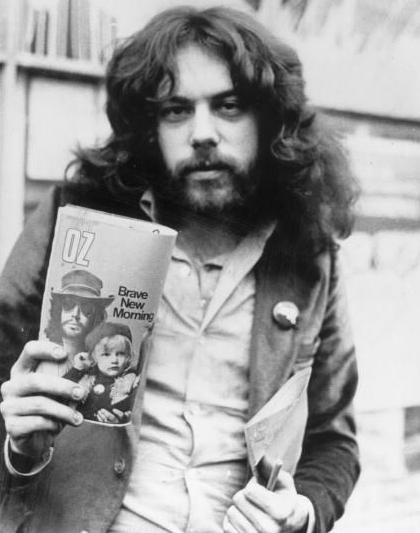 The extremely unintelligent future multi-millionaire publishing magnate Felix Dennis
A lot of people were starting to wonder why art gallery owners and satirical magazine editors were being continually arrested when there seemed to be any amount of hardcore pornography available in West End’s Soho. As a recent victim himself of the Dirty Squad, John Lennon lent his support to Oz and released Do The Oz to help their cause.
When the Oz obscenity case went to appeal – the defendants famously appeared wearing long wigs – it was alleged by Geoffrey Robertson, one of the defence counsels, that the lord chief justice, Lord Widgery had sent his clerk to Soho to buy the hardest porn he could find. Compared to the material with which he returned, Oz magazine paled in comparison. Because of this and that the original judge, Justice Michael Argyle, had seriously misdirected the jury, the original convictions were quickly quashed. 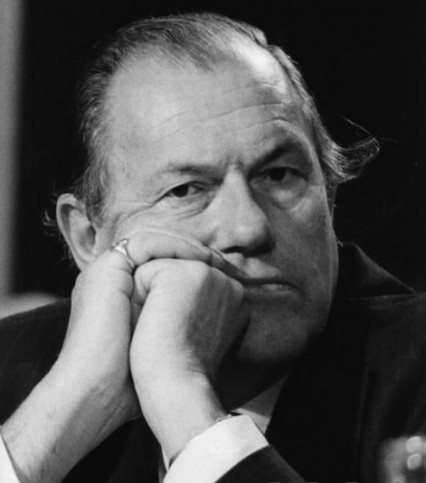 
It is an unfortunate fact of life that pornography has existed for centuries and it is unlikely that it can ever be stamped out.

Maudling was shocked with this explanation, or what was rather a lame excuse, and he quickly initiated a major corruption inquiry into the Metropolitan police. The Government and the judiciary, albeit too slowly, were coming to the conclusion that there was more than the odd bad apple in the Metropolitan police. It later came out that Fenwick had brought a pornographer to Holborn Police Station and select what confiscated pornographic material he wanted for redistribution in his sex-shops. 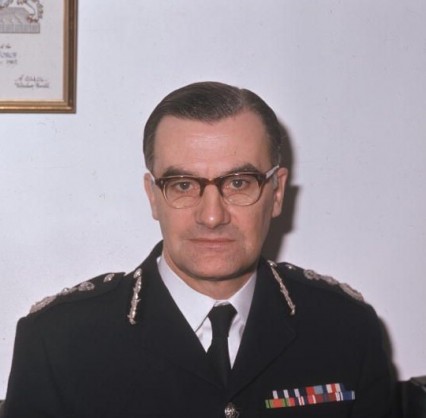 The Metropolitan Police commissioner in 1972
In 1972 Maudling appointed Robert Mark to be the new Commissioner of the Metropolitan police. To the old guard in the Met he was a provincial outsider. Mark had q reputation as ‘Mr Clean’ and the Met had nicknames for him such as the particularly witty ‘The Manchester Martinet’ and the hilarious ‘The Lone Ranger from Leicester’.
In Soho at the time it was impossible not to notice the porn shops, they had proliferated greatly in the last few years, and unusually for shops in Britain in the mid-seventies they were open seven days a week. The windows were filled with garish displays of soft-core magazines and books but with notices implying, usually correctly, that there was a wider range of harder material to be found inside. 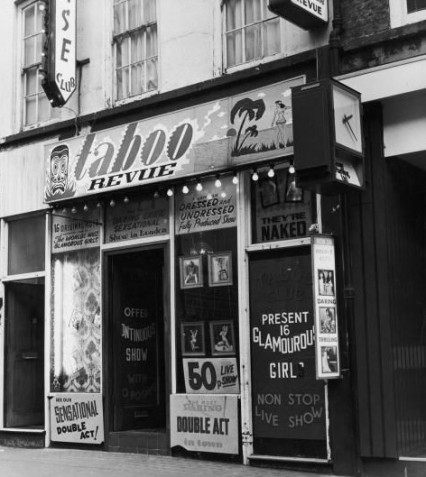 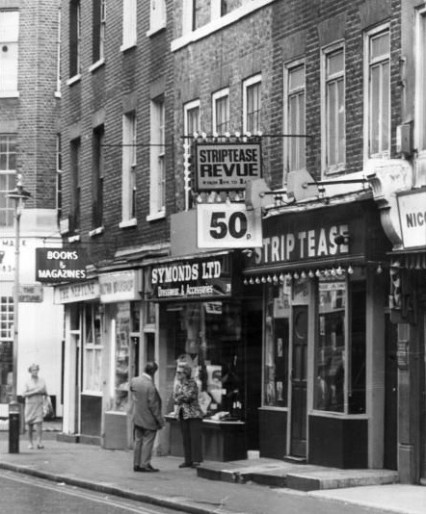 Soho in the early seventies
In the same year as Mark’s appointment various Sunday tabloids exposed a connection between James Humphreys (who openly ran two strip clubs and was one of the biggest operators of pornographic bookshops in Soho) and Commander Kenneth Drury. They had both enjoyed a luxurious two week holiday in Cyprus accompanied by their wives, all paid for, of course, by the Soho pornographer.
Drury was hopelessly compromised and concocted a story that he was in Cyprus looking for the train robber Ronnie Biggs and contradictorily paid for the trip himself. Nobody believed the story. 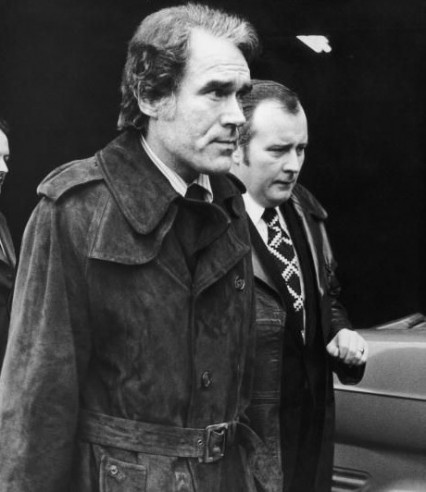 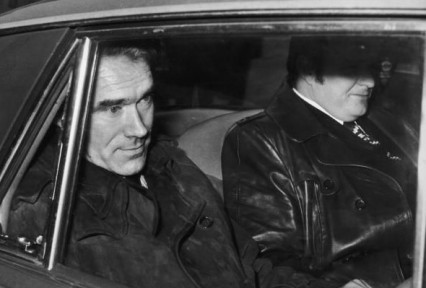 James Humphries after his arrest, January 1974
Humphreys quickly realised the danger for him of appearing to his criminal associates as a police informant and announced that Drury had set up the whole thing. After a police raid at his house a diary of Humphrey’s was found in a wall-safe and open-mouthed the corruption investigators found that it unbelievably detailed payments to seventeen different policemen including Drury.
Even senior policemen such as Bill Moody – Head of the Obscene Publications Squad and, incredibly, his superior Commander ‘Wally’ Virgo – a man who had overall control of nine squads including the Flying, Drugs and the Porn Squad were being paid off. 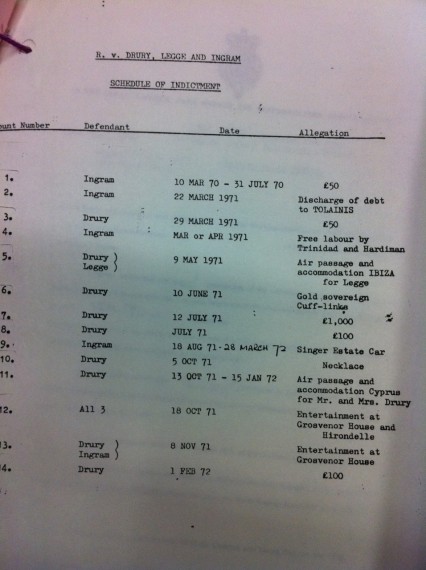 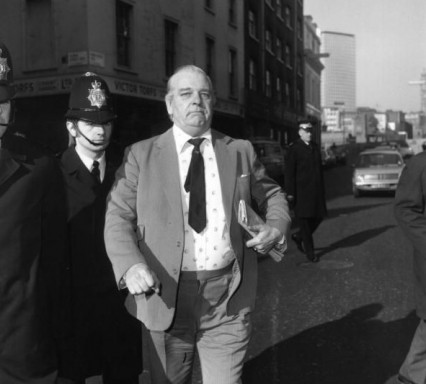 Commander Kenneth Drury - the most senior policeman ever to be convicted
The corrupt policeman had built a delicately balanced house of cards that soon came tumbling down. Initially there were just the usual discrete early retirements and resignations but eventually there were two major corruption trials and George Fenwick, Bill Moody, Wally Virgo and Kenneth Drury were all given between ten and fourteen years in prison in 1977. Mr Justice Mars Jones after Fenwick’s trial said:


“Thank goodness the Obscene Publications Squad had gone. I fear the damage you have done may be with us for a long time.”

After the second trial Mars-Jones said it revealed:


“corruption on a scale which beggars description.”

In response to the obvious corruption that was happening the Home Office, in conjunction with the Met Police Commissioner Sir Robert Mark, appointed the Assistant Chief Constable of Dorset Constabulary, Leonard Burt to investigate all the allegations.
In August 1978 a team of two hundred officers began investigating the Metropolitan police from top to bottom. Referring to Burt it had the nickname Operation Countryman. At first the team were housed at Camberwell Police Station but following clumsy attempts to interfere with their documents, records and evidence they moved to Godalming Police Station in Surrey.
After six years, Operation Countryman presented its findings to the Home Office and the Commissioner. It eventually came to light that over 400 police officers lost their jobs during or after the Countryman investigation. Despite  the Countryman Operation’s report that recommended that 300 officers should face criminal charges, not one officer was ever charged with a criminal offence as a result of the investigation. Plus ça change.

This entry was posted on Thursday, June 26th, 2008 at 12:39 pm and is filed under Camberwell, Soho. You can follow any responses to this entry through the RSS 2.0 feed. You can leave a response, or trackback from your own site.

Posted by butlincat at 5:19 am