BOB DYLAN PICKED UP BY POLICE AS VAGRANT...2009 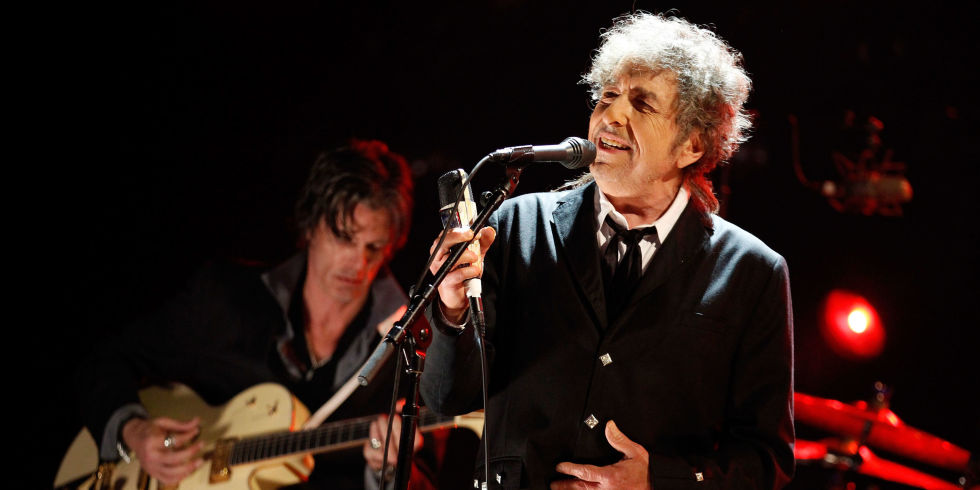 By Tom Junod
Advertisement - Continue
It was just a call for someone looking in a house. And it was pouring rain. So they gave a description, and I just happened to be there and stopped him, asking, you know, normal questions. "What are you doing here?" "What's your name? He said, "I'm Bob Dylan. I'm on tour." And I thought, "No, that doesn't seem right." Because he was playing in Lakewood. Why would he be in Long Branch? It's 45 minutes from where he should be.
He's saying these things that are normal indicators of liars. "I'm Bob Dylan." Okay, what's your real name? And he told me his real name — his real, real name, his government name. I think it's Zimmerman, right? And I'm like, that's totally weird now, that's not right. He has two names! Some other kid came and backed me up, and he's my age. He didn't believe him either.
I just put him in the car and said, "Okay, where are you staying, Bob?" kind of sarcastically, messing with him a little bit. "Where's your hotel, where might you be staying, where are your friends?" And he says, "Oh, it's this hotel out by the ocean," and I think that kind of makes sense. And even when we pulled up to the hotel and there were buses and stuff, I thought it might be some guy in character, someone who might be imitating him and won't get out of character, even dealing with the police.

Bob Dylan was nice! He talked a lot. And I wasn't even paying attention to some of the things he was saying because in my head I was wondering, "What am I going to tell the hospital, what am I going to tell my supervisor?" He's just blabbering in the back. I actually remember he said, "Just take me over there, I'll give you tickets to my show, you can see me play." I remember he said that. And I thought, this guy is crazy.
He told me he's famous for singing. He told me he wrote all these songs. It didn't actually occur to me to ask him, "Sing me a song." That was the third question my mom asked. "Why didn't you ask him to sing?" I was like, "I don't know Mom, I didn't think about it." In retrospect it was the number one thing I should have done.
I think he named a couple of songs. But I wouldn't have known any of the songs.

He wasn't in trouble. There wasn't any chance of him being arrested. It was just a suspicious thing. There was no chance of him going to jail or anything. He probably knew that. I mean, if he couldn't tell me where those buses were he might have been in the hospital — I would have had to have made some phone calls.
Even if he didn't say he was Bob Dylan, I would have thought something was off. Normal people — well, you usually ask, "What are you doing here, where do you live, where are you from?" He said, "I have houses all over the place. I don't live in one place. I travel so much, I have a house in London, I have a house in California." People in Long Branch say, "I live in Long Branch. I live here." So little red flags are going off, and he's not lying, but a normal person would have made sense. If he didn't say he was Bob Dylan, the totality would have been: "Who is this person, why do they say they live all over the place?"
He looks like a homeless person, and he's saying he's rich, he has all these houses, and he's walking around in the rain in a rain jacket. He was soaking wet. He had rain boots on, sweat pants, and a jacket.
He said that he saw a house with a for-sale sign, and he was looking to possibly buy this house. I said, "Normal people go through a real estate agent. Why were you walking around the back of the house? He was like, "I don't know, I just wanted to check it out." I was like, "All right." It was kind of strange. I read some things afterward, that he was looking for Bruce Springsteen's childhood house, but it's not even in that neighborhood. It's in the west end side of town. This was the center of Long Branch. There's nice houses, but they're kind of old and rickety — I don't know what he was looking at. I have no idea.
When you encounter someone as famous as him, you expect him to be pompous: "This is who I am, don't do this, don't you know who I am?" It was nothing like that, nothing at all. He was modest and calm and chill. I definitely didn't think, "Oh, this guy is such a jerkoff, and I'll never think of him the same way again." Not at all. He was nicer than 95 percent of the people I deal with every day.

As soon we got to the hotel, and I pulled the police car in, I was thinking, let me check this out. Maybe it's just a coincidence, there's just buses here, they're not for him. And his manager came running out to us and flipped out. Being a total jerk. He grabbed Bob out of the car and said, "Don't talk to them anymore, come with me." I was like, "Sorry! Sorry, Bob!" — for my Dad, a fan. "I didn't mean to not believe you." I couldn't talk to him anymore, because the manager wouldn't let me have anything to do with him.
The manager was a pompous asshole. And I go, "Whoa, we're still the cops, give us some form of ID or we're going to come on your bus." And he says, "You don't have a warrant, don't come on this bus!" I was like, "We're not trying to do all this, tell us this is who it is, and we'll get moving."
We tried to look in the bus. I was kind of being nosy, and wanted to. And the manager wasn't allowing us anywhere near it, which was suspicious in itself, but fine, whatever. The guy was just in the back of my car. Who cares if I see him on the bus? I mean, he just seems like a quiet, chill dude, who was minding his own business, being a little weird. He had to run into me. I have no idea what would have happened if he had met one of the older cops, how that would have gone down.

I don't even know how it got out. The police department all joked and laughed and made fun of me for weeks, but none of the cops told a newspaper or anything. It didn't even come out till a few months later. I was like, "That shit happened months ago."
You know, I mean, he's famous, I get it. And it's weird that he was in Long Branch, but people were calling from everywhere to talk to me. My picture was in the biggest newspaper in New York. They made it seem like I was some dumb girl who didn't know who he was and had never heard of him and that's not the case. My dad, he passed away six years ago, but he used to love Bob Dylan. My Mom listened to him. I knew who he was but I wasn't sitting around looking at his picture every day. But since then people have bought me CDs and records. I don't know. It's funny.

I wanted to have a normal conversation with him, after. I wanted to say, "Manager, just step away from him for one minute, just let me talk to him for one minute, I promise I don't want anything from him, I don't want to bother him. I just want to have a conversation with him where I don't think he's a crazy person."
If I saw him today, I don't think he'd be mad — I'd say, "It was a misunderstanding, and everyone came out okay. I was just doing my job and didn't believe you. My bad. I'm sorry."
—As told to Tom Junod
source:  http://www.esquire.com/entertainment/music/a26889/dylan-buble/
Posted by butlincat at 6:38 pm