"JULIAN ASSANGE: A MAN WITHOUT A COUNTRY" By Raffi Khatchadourian 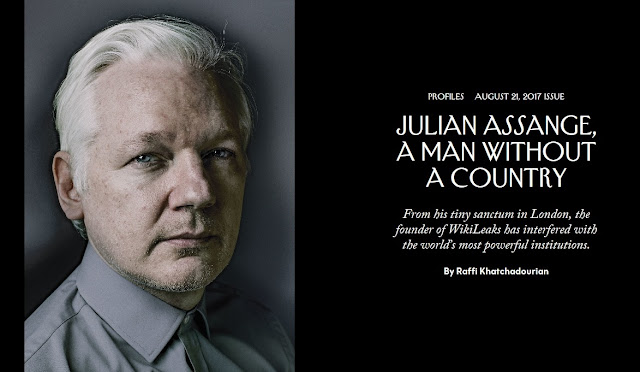 Assange at the Ecuadorian Embassy in London. He has not left the Embassy since he sought asylum there, in June, 2012.

Photograph by Nadav Kander for The New Yorker
I. Inside the Embassy


II. The Road from Sweden

IV. WikiLeaks vs. the C.I.A

As for Romance
How impossible it is to
have feelings for
Someone completely
Unavailable
Not because of his heart
But his circumstances.

Constantly under threat
Threatened to be killed.

As Anderson left, Assange asked me, “Have you met my cat?” It darted past us.
“Is this the one with the Twitter account?” I said.
“It is,” he said. “It’s Michi, which is Ecuadorian for ‘cat.’ ” The animal’s name was in flux, he explained. “When Castro died, we started calling it Cat-stro.” Assange had told the tabloids that the cat was a gift from his children. (He has several, some of whom live in France, under assumed names.) But someone who knows him well told me a different story: “Julian stared at the cat for about half an hour, trying to figure out how it could be useful, and then came up with this: Yeah, let’s say it’s from my children. For a time, he said it didn’t have a name because there was a competition in Ecuador, with schoolchildren, on what to name him. Everything is P.R.—everything.”

For some time, Assange has adopted the media habits of the powerful, restricting his appearances to brief, high-profile television interviews, conversations with friendly interlocutors, managed press events, and Twitter. On November 5th, days before the election, in a TV interview with one of his fiercest defenders, he declared, “We can say that the Russian government is not the source” of the election e-mails—a denial that did nothing to quell a growing suspicion, even among close supporters, that he was not being honest. “He says they’re not Russians,” one of them told me. “Well, he can’t know that. It could be his source was a front for the Russians. I think the truth is important, however it’s acquired, but if he knew it was the Russians, and didn’t declare it, that would be a problem for me.”
The problem was obvious. WikiLeaks, like many journalistic organizations, has long insisted on keeping its sources secret. However, Assange was not merely maintaining silence; he was actively pushing a narrative about his sourcing, in which Russia was not involved. He once told me, “WikiLeaks is providing a reference set to undeniably true information about the world.” But what if, in the interest of source protection, he was advancing a falsehood that was more significant than the reference set itself? Arguably, his election publications only underscored what was known about the Democratic National Committee and Hillary Clinton. His denials, meanwhile, potentially obfuscated an act of information warfare between two nuclear-armed powers.
That the stakes were so high was a potent indication of the immense power that WikiLeaks has acquired since it was founded, in 2006. Assange projects an image of his organization as small and embattled—as if it had not changed much since the days when he and a few friends were the only people involved. But today, he told me, the WikiLeaks annual budget runs in the millions of dollars, supplied partly by donations that are funnelled through N.G.O.s. In 2016 alone, WikiLeaks raised hundreds of thousands of dollars from donors in the United States. “He has money in tax havens,” one colleague told me. “They have so much money in bitcoin it’s ridiculous—meanwhile, there are all these poor people who are chipping in money who feel like he is not getting enough support to eat.” In Assange’s view, the donations provide a level of editorial independence that few mainstream competitors have.
Assange has increasingly used the money to offer rewards for information: fifty thousand dollars for footage of a hospital bombed in Afghanistan; a hundred and twenty thousand for documents about international trade negotiations. When Trump implied that he had taped his White House meetings with James Comey, Assange tweeted, “WikiLeaks offers US $100K for the Trump-Comey tapes.” At one stroke, he appeared to endorse Trump’s bogus claim about the tapes and also implied that WikiLeaks was politically agnostic by seeking them. More significantly, he used the occasion to encourage supporters to donate, so that he could purchase the tapes—which, unsurprisingly, proved not to exist.
The idea that WikiLeaks has problems with accountability sends Assange into angry fits. “Look at all the accountability that is thrown at us!” he told me in the Embassy one evening, nodding at the walls to indicate hidden surveillance devices. “Every second of every day!” He cited the government scrutiny, and relentless journalists, always ready to pounce when he makes a misstep. Raising his voice, he said, “WikiLeaks is probably the most held-to-account organization on earth!”

One evening this spring, in the Embassy, Assange held a glossy magazine in his hands and deliberately placed it face down on a table, so that I could not see what it was. He was going to get us coffee, and wanted to show it to me after he returned, but he could not wait; halfway to the door, he rushed back and dramatically flipped it over, revealing it to be a commemorative edition of Newsweek, with Hillary Clinton posed beneath the words “Madam President”—a “DEWEY DEFEATS TRUMAN” headline from 2016. “They had to pulp it!” he declared, gleefully. Then he looked at the magazine with disgust. “It’s hagiographic,” he said.

“What about it is interesting, though?” Collier asked. “I don’t really see how it would be a story.”
“ok, what about another one?”
The emergence of this kind of entity raises vexing questions for journalism. One night, while painting in the Embassy, George Gittoes mentioned that he had seen a BBC interview with Dean Baquet, the editor of the Times, discussing the phenomenon. “It was interesting for me, psychologically,” he told Assange. “He said, ‘I have to admit that if this stuff landed on my desk I wouldn’t be able to sleep at night knowing that the American people did not know it.’ ” Gittoes advised Assange to mention the interview when defending his publications.
Back in New York, I watched the interview, and it quickly became clear that Assange could never credibly cite it in his defense. Baquet did argue that, in most cases, journalists should not withhold true information, saying that “news value trumps all.” But he suggested that, in the case of a state-sponsored leak, the state’s identity and its motives were bits of information that were potentially as crucial as any other, and that journalists could not turn away from them. Above all, he insisted on the value of publishing what was genuinely important and not what was trivial. If Russia leaked him documents about the State Department’s decisions in Syria, he would report on them; if it leaked about Obama’s smoking habit, he wouldn’t.
This kind of judgment—deciding what is signal and what is noise—is precisely what Assange’s system was designed to eliminate. In his campaign publications, the results were clear. There were stories of genuine import: an episode in which Donna Brazile, a CNN commentator who became the head of the D.N.C., illicitly leaked debate questions to Clinton; others in which Clinton seemed uncomfortably close to selling political access in exchange for large donations to her family foundation. But there were also thousands of pages of trivia, some of which did harm. E-mail conversations about a pizza place in Washington were spun into a conspiracy theory about child pornography, which ended in an armed attack. The leaks revealed staffers’ personal e-mail addresses and cell-phone numbers and, in one case, a voice mail that captures a parent and a child together at the zoo. Above all, the steady drip from WikiLeaks, always promising some bigger revelation, distracted from an essential inquiry into whether the country’s national sovereignty had been breached. For more than a year, it has often seemed that there is nothing but noise.

A Reporter at Large

What lay behind Russia’s interference in the 2016 election—and what lies ahead?


The Chaos of the Dice

A backgammon hustler’s quest to gain an edge.


FAIR USE NOTICE: This item may contain copyrighted (© ) material. Such material is made available to advance understanding of ecological, political, human rights, economic, democracy, scientific, moral, ethical, and social justice issues. This constitutes a 'fair use' of any such copyrighted material as provided for in section 107 of the US Copyright Law. In accordance with Title 17 U.S.C. Section 107, this material is distributed for analysis, commentary, educational and intellectual purposes. In some cases comedy and parody have been recognized as fair use.
Creative Commons Attribution-NonCommercial-ShareAlike 3.0 Unported License. For more information please visit:
http://www.law.cornell.edu/uscode/text/17/107
NB: Everything posted on this site conforms to the meaning of the word “alleged” as defined under UK and US Laws and Statutes.


close dialog
Posted by butlincat at 11:34 am