More
Dr. Katherine Horton‏ @Stop007org Dec 16
"(910) What is missing from this report is that @GCHQ is setting up troll accounts to conduct psychological warfare, as revealed by @Snowden. From what I know from victims, I wager these 2 did it for the #MI5 #Gangstalking #PsychoTerror Program."

Lewis Hawkins, 18, and his father, David Riches, were both sentenced to 12 months after tweets that left abuse survivor in tears 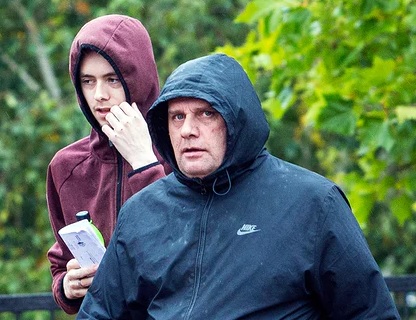 Lewis Hawkins (left) and David Riches, who initially took the blame for his son and pleaded guilty to perverting the course of justice.
Photograph: David Sillitoe for the Guardian
Daniel Taylor

Two people are beginning 12-month prison sentences after a fake Twitter account, purporting to be that of a paedophile, was set up to “troll” Andy Woodward after he became the first former footballer to waive his anonymity and leave the sport facing a sexual abuse scandal involving hundreds of other victims.

Woodward, the former Crewe Alexandra, Bury and Sheffield United player whose case led to the Football Association commissioning an independent inquiry, was targeted by a bogus account using a photograph of the man who abused him in the 1980s and calling itself “The Nonce”.

Woodward, who has been diagnosed with post-traumatic stress disorder, was placed on medication because of “the uncontrollable feelings and emotions and instant flashbacks” he suffered after Lewis Hawkins targeted him within two days of the former player telling his story in the hope it would encourage others to follow. The last available figures, up to 28 September, show that 748 victims have come forward and 285 suspects have been identified, with 331 clubs “impacted” and Operation Hydrant, the specialist police unit, receiving more than 2,000 football-related referrals.

In one of the few cases where internet trolling has led to prison, Hawkins has now been told he will have to serve six months, with the rest on licence, after what the judge described as a “sophisticated” operation to make Woodward believe it was a genuine account. The victim was in tears as he told Chester crown court about the devastating effects on his life. Hawkins was also served with a 15-year restraining order.

“The content of the messages horrified me to the point I felt dizzy,” Woodward said. “It made me feel sick. I dropped my phone on the table and I was in tears. I was home with my friends and family and virtually collapsed to the point where one of my family members had to hold me up from falling to the floor. Only two days before, I had given up my anonymity to speak publicly. I felt I had reverted to being a child and it took me back to tragic events. I was in a lot of fear. I felt vulnerable and powerless.”

Hawkins, 18, of Crewe, created the Twitter account after Woodward’s case instigated what the FA chairman, Greg Clarke, has described as a “tidal wave” and the biggest crisis he can remember in the sport.

Hawkins’s father, David Riches, 45, of Crewe, initially took the blame, telling the police it was “banter” and “personal fun” and saying he did not think it would upset anyone. Riches described himself as having a “cruel sense of humour” but eventually accepted it was “a bit out of order”.

However, Hawkins later confessed he had sent the messages and admitted he had asked his father to accept responsibility for what the judge at a previous hearing, Patrick Thompson, described as a “deeply disturbing and unpleasant case”. In a police interview, Hawkins said: “I was so bitter about my own life I thought I would try to upset somebody else’s.”

Hawkins and Riches pleaded guilty to a charge of perverting the course of justice. Hawkins also admitted a charge under the 1988 Malicious Communications Act of sending an indecent or grossly offensive Twitter message that was intended to cause anxiety and stress.

Riches, who previously went by the name David O’Brien and had a number of previous convictions for dishonesty, shoplifting and public order offences, was also informed he would have to serve half of his sentence, with the remainder on licence, after the court was told he took the blame to cover for his son.

Hawkins had asked his father to “have my back” and was described by a probation officer as being “unaware of the word ‘trolling’ and not having any real knowledge of the problems around that, and the way the internet is increasingly used to terrorise people”. The teenager described himself as “not right in the head” after losing his job and a number of personal issues. As he was led away, he made a number of threats, shouting: “When I get out, I will fucking kill you.” Riches apologised to Woodward.

Speaking after the case, Woodward said: “I have no doubt the intention of the person who sent these messages was to cause significant harm to me. I have had several months of online abuse and feel totally devastated about the lengths that people will go to over the subject of child abuse. Nothing, however, compares to what these messages did to me.

Published on Dec 7, 2016
Dr Katherine Horton is a high energy physicist who was a Research Fellow at St John's College, Oxford. This is her brief bio.

How Dr. Katherine Horton Became an Enemy of the State for Attending a Public Trial in London

[Editor's Note: You won't realize how good these 4 hour shows from Ella are until you listen to them in their entirety. The callers following the guest speaker have as much valuable information to contribute as does the very knowledgeable guests. These shows are invaluable for anyone who is currently victimized by electronic harassment, but they are important harbingers of a worldwide electronic coercion and harassment enslavement agenda that is gradually being installed in America and other countries that will eventually touch every human being on the planet.]

Over the past 5 years, I have been stalked and harassed continuously. My private life has been under intrusive and overt surveillance. All my communications (voice, phone, email etc.) have been intercepted and sometimes overtly acted upon by agents. Furthermore:
And to top it all off:
The microwave assaults are incredibly brutal and occur continuously every hour of the day and night. The attacks ramp up at night when I am lying stationary and defenceless. The microwave beams with which they target people (for there are thousands more victims!) are invisible, penetrate walls and are so intense that it hurts. Imagine putting your hand in your microwave; then focus that into a beam and aim it at your face.
Most of the time, I am assaulted inside my home. However, I have also been attacked spectacularly in public. And during certain “assault campaigns”, I am microwaved with large beams that follow me everywhere I go. Those times I am also shot at painfully from tail-gating or over-taking cars. I have also been assaulted inside professional venues. (For example, when I attended a HR & consultancy fair, Personalmesse-Nord, in Hamburg in April, I was literally shot in the head twice! The second time, it was so intense that I lost control of my right eye-lid and it began to flutter and the muscles around my eyes were contracting uncontrollably.) In London, I was shot in the head by dozens of agonizingly painful sharply-focussed pulses such that I collapsed on the floor.

What on Earth are microwave weapons?!

Microwave emitters, or more generally, electromagnetic weapons are a new type of assault and murder weapon currently being manufactured in very large numbers (and very cheaply) by arms companies around the world, for example Diehl, Rheinmetall, Aaronia and Siemens (yes!). They are also known as directed energy weapons, scalar weapons, no-touch torture devices and, euphemistically, non-lethal weapons (ha!).
The nasty thing about them is that they penetrate the walls of your home. That is because microwaves pass through concrete, brick and wood effortlessly (like the beam from a laser-pointer passes through the glass walls of a conservatory). However, they get absorbed in the human body, where they cause pain and incredible damage. Microwaves damage cells, organs, cause tumours and cancer. And they can kill (think of a sausage in a microwave oven).
By this means, it is possible to assault a person inside his home from the outside (from even large distances!), cause cancer, organ damage, brain damage, a heart attack and death without leaving a visible trace of the assault. These weapons thus allow people to commit the perfect crime – on the cheap!
Related

Dr. Katherine Horton records that, after dropping people off at the train station, she was just shot in the neck from a car in Schaffhausen with number plate TG-213 561 at 17:39 (time also shown on car clock on right side of video) on 17th December 2017. These appear to be floating death squads of members of the sprawling Secret Service networks using Directed Energy Weapons as manufactured by Diehl and Rheinmetall and other arms manufacturers. The shots appear to have aimed at the area where Dr. Horton was shot in the neck on 11th December 2017 by a cluster of poison darts, as published with a photo of the injuries on her neck on her Twitter on 12 December in Tweet no. 769: https://twitter.com/Stop007org/status... The darts resulted in huge lumps of inflammation that lasted an entire week. As the inflammation was beginning to go down, the car microwaved Dr. Horton's neck. Those darts could have carried chips that the car's weapon system was trying to aim at or communicate with. The chipping and tagging and shooting of Directed Energy Weapons at chips seem to be part of global War Games in preparation for UN Agenda-21-style global genocide for depopulation.

VICTIMS ARE ENCOURAGED TO DOWNLOAD & BACKUP THIS EVIDENCE FOR USE IN THEIR OWN COURT CASES AS SUPPORTING EVIDENCE.
Posted by butlincat at 5:52 pm