(ABOVE, Lee Spiegel’s photo of the supposed “Authentic Alien Artifact” in the Area 51 exhibit of the National Atomic Testing Museum in Las Vegas, Nevada – 2013)
December 24, 2017 – courtesy of Robert Sheaffer: http://badufos.blogspot.com
(QUOTE):
In the days since that New York Times story  (of December 16, 2017)  burst on the scene, attention is starting to turn to the following puzzling lines in that story:
By now, everybody knows that contracts obtained by The Times show a congressional appropriation of just under $22 million beginning in late 2008 through 2011.  The money was used for management of the program, research and assessments of the threat posed by the objects.
The funding went to Robert Bigelow’s company, Bigelow Aerospace, which hired subcontractors and solicited research for the program.
But, according to the New York Times story, under Mr. Bigelow’s direction, the company modified buildings in Las Vegas for the storage of metal alloys and other materials that Mr. Elizondo and program contractors said had been recovered from unidentified aerial phenomena.
Bigelow’s company modified buildings in Las Vegas for the storage of artifacts gathered from UFOs?
That does not seem to be possible, but that is exactly what the Times story says.
How many tons of alleged UFO artifacts must Bigelow have to need to modify buildings to store it?

By the way, in 2013, there was a UFO discussion panel held at the The National Atomic Testing Museum in Las Vegas. They had a special exhibit on “Area 51.”
During the question and answer session, Las Vegas skeptic John Whiteside asked about the supposed “authentic alien artifact” in the Area 51 exhibit.
The moderator referred the question to reporter George Knapp, in the audience, who (scandalously)  was the source of that “artifact.”

Knapp has made a career out of reporting on weird stuff like alleged saucers at Area 51, Robert Bigelow’s Haunted Ranch in Utah, etc.
Who had verified that supposed artifact?
The Russians, and others.  Who exactly?  No answer.
The moderator encouraged the two to take the discussion off-line afterwards.
Immediately after the close of the questions, Whiteside says he was approached by Jim Brown who identified himself as the Acting Director of the Museum.
Brown berated him for asking such a question, claiming that it threatened their funding.
If a Museum’s funding is threatened by asking a legitimate question, the fault lies not with the questioner, but with the Museum.  Whiteside went looking for George Knapp after this, no more than five minutes later, to find that he had quietly slipped out the door.
I’m thinking it’s very likely that this was one of the same “UFO artifacts” that Bigelow had.  If so, one would scarcely need to modify any buildings to house it.
(UNQUOTE)
Thanks, once again, to Robert Sheaffer.
As I stated elsewhere many many times, I am a realist who believe that the UFO phenomenon itself seems to be real.   But to me, UFOs do not represent conclusiveevidence of physical extraterrestrial visitations by physical extraterrestrial, biological entities in physical extraterrestrial spacecraft of any kind.  There is more to this phenomenon than the ET hypothesis.  I am also highly skeptical of the existence of authentic UFO artifacts.
……..
Norio Hayakawa’s CIVILIAN INTELLIGENCE NEWS SERVICE
E-mail = noriohayakawa@gmail.com
Facebook = http://www.facebook.com/fernandon.hayakawa


About those "Glowing Auras" in the Pentagon Infrared UFO Videos

Following up on the media's DeLonge Overload we wrote about three days ago, there is a lot to report. 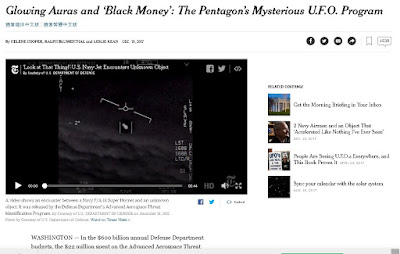 According to that now-famous New York Times story,

The program collected video and audio recordings of reported U.F.O. incidents, including footage from a Navy F/A-18 Super Hornet showing an aircraft surrounded by some kind of glowing aura traveling at high speed and rotating as it moves (emphasis added).

This struck me as a monumentally stupid thing to say, especially since a "glowing aura" was also visible in the "Groundbreaking" Chilean Helicopter Infrared video released by the "experts" in the Chilean government UFO investigations, that Leslie Kean (one of the authors of the current New York Times article) promoted so eagerly. (In that case, the "aura" was called an "envelope".) That video has conclusively been shown to depict a distant jet aircraft whose position had been misjudged.
I figured that these "auras" were almost certainly some kind of image processing artifact, a possibility that seems not to have occurred to the Pentagon "experts." So I consulted John Lester Miller of Cascade Electro Optics, the guy who literally "wrote the book" on Infrared Imaging. He had helped me investigate the Infrared UFOs that turned up in a video over the Bay of Campeche, Mexico in 2004, which turned out to be distant flares from burning oil wells. When I asked Miller what those "auras" might be, he replied,

I know exactly what the glowing aura is....it is a common image processing artifact called "ringing"....Frankly, I'm surprised the ATFLIR has it, we worked hard at [my previous company] to mitigate/eliminate this artifact.  When in "white Hot" you will see that the aura around it is dark, and when in Black hot, it is brighter than the background.  This is the image processing algorithm compensating for the large signal on neighboring pixels where the signal is not there, the algorithm doesn't know the shape of the object, and over-processes the neighboring pixels.  Very common when an object (like jet engines) are images over a cold background (like high altitude clouds).

So when various UFO "experts" talk about a "glowing aura" surrounding the objects, they are in fact admitting, "We don't know anything about infrared imaging, and we did not consult with anyone who does."

Miller says that the objects are likely distant jet aircraft, but we can't see them clearly enough to be sure. Which is itself an interesting question - why is the quality of these videos so terrible?


What perplexes me  (and is telling) is why all these IR UFO videos have such lousy quality.  Modern IR images look like Hi Def black and white TV.   All of these are out of focus, need uniformity correction and generally are crap.  We should be able to make out a shape and even count the engines, or see landing gear if deployed. A sales guy would never show a prospective customer anything like these.

Very good observations, indeed! Why are there no good, clear infrared images of UFOs, in sharp focus?

One of the two Infrared videos recently released by the Pentagon is labeled by DeLonge as the "Gimbal video."  He writes that "The filename “GIMBAL” seems to be traceable to the unusual maneuvering of the UAP," thereby proving that he has no idea whatsoever what he is talking about. Miller explains that "Gimbal is just a generic term for any electo-optical system (infrared, visible or laser) that has a two dimensional pointing mechanism." 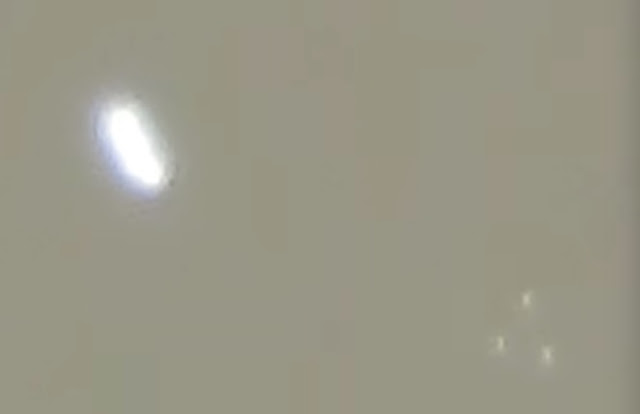 I received this UFO video recently. This was filmed on 21st October 2017.

Witness report:I saw a huge white orb over my house in Long Beach CA. At first I spotted two objects crossing path’s with each other then focused on the larger one. As I zoomed in on my camera the UFO started ejecting smaller spheres into the atmosphere. The first ejection formed a triangular formation! As I kept filming the object started emitting tons of orbs falling in a steady stream from the main object. There were at least 40 smaller spheres emitted from the main UFO. Interestingly the smaller orbs were only visible through my infrared camera. This was recorded with my full spectrum Canon SX60 with a monopod in my backyard in Long Beach CA.
The first part of the video shows the raw footage and the analysis of the capture is presented in the end of the video.

LATEST UFO REPORTS FROM OUR READERS


Five reasons to be skeptical about that New York Times UFO story – – December 20, 2017