Back during the late 1970s, a number of CIA operational  personnel,  one a former Watergate figure and Bay of Pigs “detainee,” were looking for ways to “do away with” soft targets inside the US.
With them was a longtime Mossad operative from Argentina with a New York medical license and, well, at this point I stop adding names.
The idea was to get rid of some of the huge list of CIA targets that kept coming into Miami and Houston which included East German Stasi guys, and lots of irritating and utterly self-absorbed Central American “leftists.”
The tools at hand:  A kitchen blender, one of those beehive models, a jar of Vaseline (as to why the CIA had that around, we won’t get into) and a book on  toxic plants.
Test one:  DMSO from a local healthfood store, several leaves of poison ivy and a tablespoon  of  petroleum jelly (petrolatum).  The idea was to smear it on a door handle and using the superabsorbtion capability of the DMSO solvent, used for quackery arthritis treatments, drop someone in their tracks with a response to the plant’s allergin called urushiol.
From this point, the working group moved on to datura or Jimson Weed.  By any standard, the described “poisoning” of the “Scrippals” would have  been a standard CIA “punishment” attack  using flowering datura seeds, commonly available in the UK, smeared on their door with DMSO and petroleum jelly.
Five minutes with a blowfish, a sharp knife and a similar methodology would have worked faster though death would likely have resulted.
A number of common household chemicals are capable of duplicating the Scrippal scenario but most likely it is this one:
Boris Johnson made the whole thing up.  If a real allergen or toxin was used, the risk of evidence would  have been high.  As is always the case in Mossad-like operations, make the whole thing up and use press assets controlled though the Murdoch organization and Anti-Defamation League, both “anti-Western” or “Bolshevik” front organizations for those too friggin’ stupid to pay attention.  And so it goes…and on to the story someone sent me…  Gordon Duff, Senior Editor
For those unfamiliar with the situation or had been used for political ends:
Shortly after the Russian Embassy in London posed the question on what happened to the animals that Sergey Skripal kept in his Salisbury house, the British side, first in an unnamed leak and then as a DEFRA comment, said that “when a vet was able to access the property, two guinea pigs had sadly died. A cat was also found in a distressed state and a decision was taken by a veterinary surgeon to euthanize the animal to alleviate its suffering”. 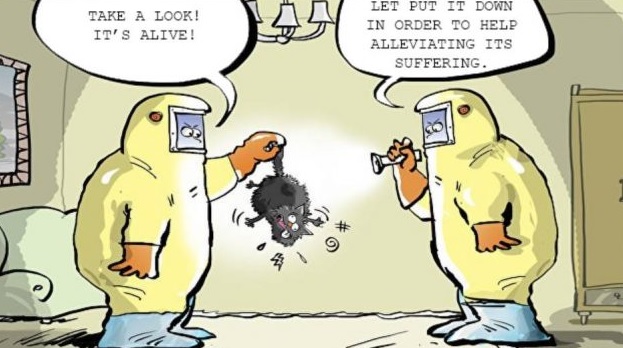 This is, however, the sort of answer that brings about still more questions. Regarding the dead guinea pigs and the malnourished cat, it is said unofficially that they were taken to the Porton Down facility and incinerated there. But it remains unclear if their remains were ever tested for toxic substances, which would constitute useful evidence, and if not, why such a decision was made. Below are the results of a funny public opinion poll. People from all around the world have commented the situation with Skripal’s pets and the results are quite interesting. The style and spelling of the original are kept.
It seems that the British Security services did with a black Persian cat and with the two guinea pigs the same as they did with the Skrypals after Sergey and Yulia’s reviving. They have just been through some stressful things lately and ‘merciful’ MI6 had to put them down in order to help to alleviate their suffering.
It’s as clear as day. The cat got rid of the guinea pigs and the special services did the same getting rid of the cat. The same is true for the owners of the cat and the guinea pigs. Russia banished Skripal with a shame, and the British special services poisoned him as Skripal’s life was deemed unnecessary.
MI6 catch Skripal’s black cat. It reports that the mission completed and it pissed in the buckwheat of col. Skripal. Maybe it also questioned MI6 of being promoted. Instead, British special services put their agent, Persian cat, down telling it that the cat knows too much. But what if the cat was the very GRU agent who poisoned Skripal’s family?
British security services cover their tracks! With all the questions and the pressure, sometimes maybe a little something slips out and the Black Persian cat was no exception. So maybe the cat will let something slip.
Well, there are only two real explanations in the case of two guinea pigs dead and one black Persian cat deeply stressed. If they survived they hadn’t licked this notorious door handle. Well, that means that it was the hosts who were really licking the door handle. Maybe the guinea pigs had being caged and the cat hadn’t managed to open it. Anybody will be placed under serious stress when you are hungry; the food is before your eyes, and you unable to take it! No one could survive that! The guinea pigs, in this case, have died of fright as they couldn’t help fearing that one might eat the other.  Where are the hell all the Societies for the Protection of Animals?
Eventually, the two guinea pigs have starved to death of natural causes.  The one cat was put down. All of them were burned down in the end. Sergey Skripal is in a coma [no he's not - he's "recovering rapidly" 06 April: "Poisoned Russian agent Sergei Skripal recovering rapidly, hospital says" https://uk.reuters.com/article/uk-britain-russia-skripal-hospital/poisoned-russian-agent-sergei-skripal-recovering-rapidly-hospital-says-idUKKCN1HD1PB - ed.].   Yulia Skripal is recovering. “Novichok” gas has a very low performance. The British medicine has proved to be a most effective deterrent with one recovered and one put down. What are compassionate Britons! God forbid, you get under stress in London!
source: https://www.veteranstoday.com/2018/04/07/skirpal-russia/?utm_source=April+8th%2C++2018&utm_campaign=VT+Newsletter&utm_medium=email

Posted by butlincat at 2:02 am