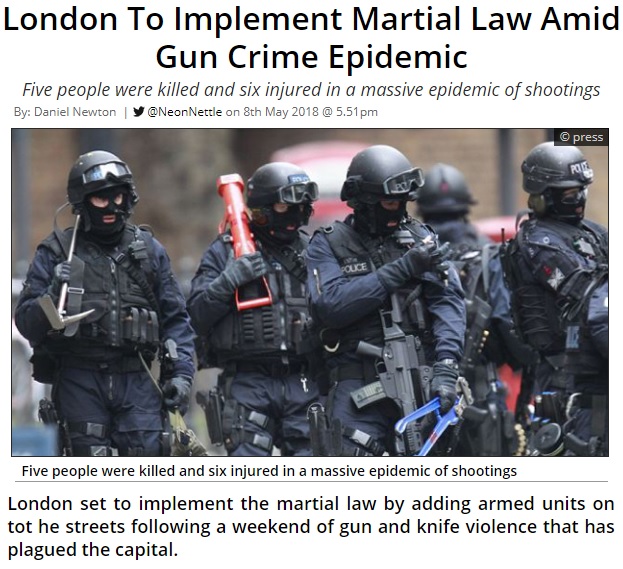 Armed officers in Oxford were shot at as they retired fire at a gunman before laying siege to a house close to the city's university.

The weekend saw one of the most violent and bloodiest on record for the UK as calls for More armed police officers to be deployed on British streets.

The UK has one of the toughest gun control laws in the world, but despite this fact, London has overtaken New York City's for the first time ever as twelve people have been killed in just 19 days. 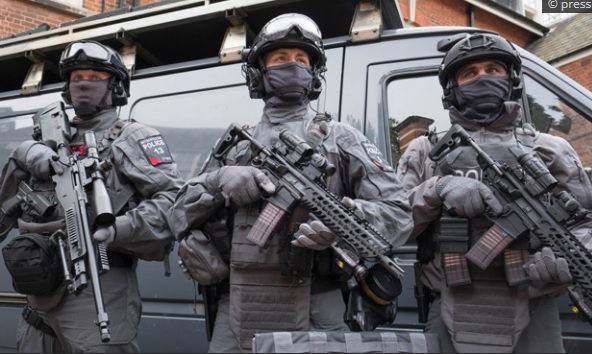 As the 'anti-gun' debate rages on in the United States amid the recent Florida shooting at parkland high school, the question remains if whether gun free zones have any effect on the homicide rate.The Express reports: Ex-MP and anti-knife campaigner Nick de Bois, who sits on the Government’s new antiviolent crime task force, called for more officers with weapons in the UK’s high crime areas.

He said: “We should be prepared to deploy such resources in hotspots where gun crime is prevalent.”

The Tory politician added that priority should be given to tackling drugs and the gangs pushing them – reportedly the source of much of the violence.

The calls came after six shootings and six stabbings took place in London, Liverpool, Luton, Macclesfield and Oxford between Saturday and Monday night.

Yesterday, the distraught mother of a youngster gunned down and killed in Southwark, south London, called for an end to the bloodshed.

Pretana Morgan, whose 17-year-old son Rhyhiem Ainsworth Barton was shot dead on Saturday, said: “Let my son be the last and be an example to everyone. Just let it stop. What must be, must be.”

“Nothing. It’s just a human race. “Just one human race. So children, please let my son be the last.”

Across the city, a 43-year-old man was stabbed in Ealing, west London, after a motoring dispute on a residential street on Saturday night.

Scotland Yard said the victim, who was in a stable condition in hospital yesterday, was believed to have been attacked after criticising the driving of the suspect, who then drove away.

The violence continued with a 22-year-old man shot on Sunday night in south-east London. He suffered non-life-threatening wounds in the shooting in New Cross Road, Lewisham, at about 6.30pm and no arrests have been made.

Two stabbings took place in Luton on Sunday, with a 20-year-old man knifed to death and another man left with serious but non-life-threatening leg injuries after an unconnected incident.

Two teenage boys, one aged just 13, were shot in broad daylight in Harrow, north-west London. It emerged yesterday that the 13-year-old had been a wedding guest who was hit in the head when a drug deal on a busy suburban street went wrong.

Police said the “innocent bystander” was walking with his parents when he was hit on the back of the head by stray shotgun pellets.

A gunman had unleashed two shots as he fired across the street at a 15-year-old boy he had met for a Sunday lunchtime drug deal.

The 13-year-old was tended to by shocked passers-by outside Specsavers on Wealdstone High Street in north-west London before armed police arrived.

Both boys are being treated in hospital. Harrow Borough Commander Detective Chief Superintendent Simon Rose said:“This was a callous, reckless and brazen act, without any thought by those responsible for the fact that there were families with children and people in the high street enjoying their weekend. “This was quite simply appalling.”

A 39-year-old man was arrested on Sunday and has now been released under investigation. Fatah Warsame, 20, from Cardiff, died after being stabbed in Liverpool city centre early on Sunday morning. And 53-year-old known gangland fixer John Kinsella was also gunned down in St Helens, Merseyside.

A man aged 37 was stabbed to death in Macclesfield, Cheshire, on Sunday night. A 15-year-old boy and a 29-yearold man have been arrested.

In Leytonstone, east London, a man aged in his late teens or early 20s was stabbed but his condition is not known. Detective Chief Superintendent Simon Messinger added officers were using search powers to seize knives.

Mr Messinger, the Southwark Borough Commander, covering the area where Rhyhiem was gunned down, said the violence had “rightly caused concern” and said the “fast-paced” investigation was “progressing all the time”.

He said additional officers would be on patrol, supported by armed response officers on motorcycles, along with dog units and air support.

London Mayor Sadiq Khan also said his thoughts went out to the “loved ones of the teenager who was tragically killed”. He refused to take any blame for the violence, claiming it was the fault of the Government after cuts to police funding.

I remain in constant contact with the Metropolitan Police and am reassured that they are doing everything they can to bring those responsible to justice and to keep us all safe. “

Violent crime has been rising across the country since 2014 and the Government is failing in their basic duty to keep people safe.”

Official statistics released in April showed the number of homicides in London had surged by 44 per cent in the past year.

In the first 100 days of 2018 alone, some 52 people were killed in London, raising serious concerns about how to tackle violent crime on the city’s streets.

A stabbing was the main cause, though many also died from gunshot wounds.

Eleven of those killed were teenagers, but almost as many were in their 40s.

The majority of victims were men, and while the borough of Haringey had the most incidents with five, people have been killed right across the city.

Successive governments have got their approach to violence on the streets of the UK all wrong.

The latest thinking is approaching things on county lines – the idea that drug dealers are leaving cities to move into rural areas.

But this over-simplified thinking ignores the fact that most of the shootings and stabbings are still happening in London.

And I’m afraid that when it comes to policy, both the Government and the police need to go back to the drawing board and begin with public health-led education from an early age.

For far too long, as a society, we have been ignoring the fact that we have a big problem with violence.

We are only now starting to get agitated by it because the perpetrators are getting younger. But this is because they are seeing the acceptance of violence in older people.

Frontline services have known this violence has been going on for a long time. The masses are becoming alarmed because it is spreading and it’s no longer just black kids with guns in bad areas.

The Government’s strategy around gangs over the past eight years has not been correct and did not have a real handle, or understanding, of what’s going on and what to do about it.

Ministers do not want to go back to the drawing board as this would be an admission of failure.

But to avoid more bloodshed on our streets, I’m afraid this really is the only way.

Dr Anthony Gunter, from the University of East London, is author of the book Race, Gangs and Youth Violence

Posted by butlincat at 9:33 pm