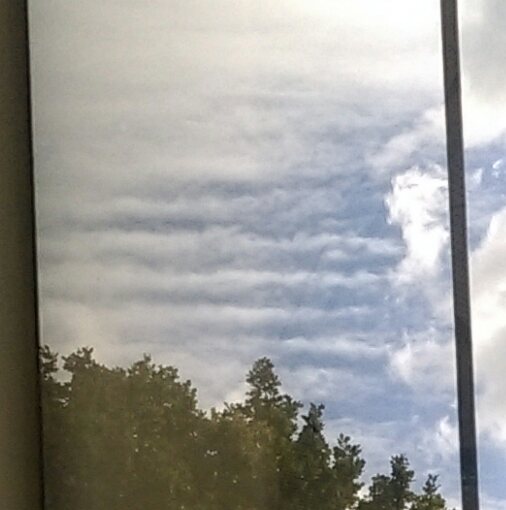 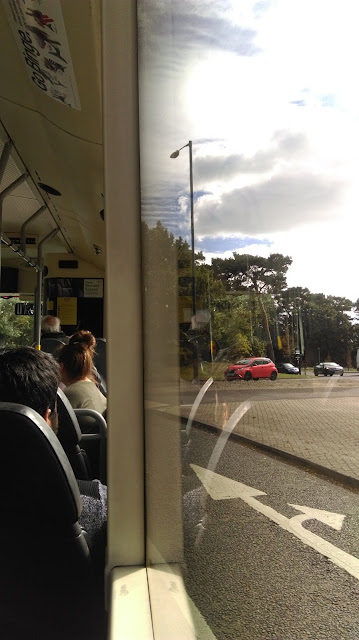 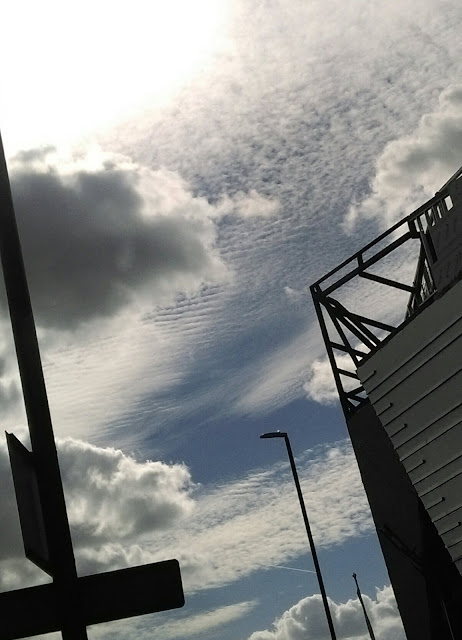 note the chemtrail plane at bottom right in the above pic 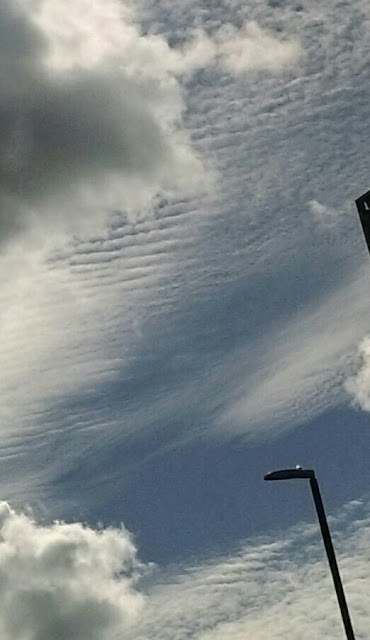 I wrote to Ms Duff, who originally posted the "HAARP Waves" article directly below, and kindly received this reply from the author of the article: Enkidu Gilgamesh =

"what you observe is the daily implementation of what the perpetrators name Solar Radiation Management (SRM) or Large Scale Climate Engineering (LSCE). Please read the papers of IPCC and its horror-scientific "studies" and other publications to find these notions.
With some knowledge in meteorology, physics + thermodynamics it is ease to understand the observed process.
1. Fine dust trails are spread across a layer of upper troposphere.
2. The dust begins abruptly to bind water by aerosolation + desublimation and becomes visible as a "persistent trail", also called chemtrail (military notion).
3. As these trails grows in volume and mass, it could result in premature precipitation.
4. The trail is now in a heavily poisonous state, because of high concentration of chemical dust. Passengers of flying-through airplanes could be poisoned (airotoxicsyndrome).
6. To prevent poisoning and losing the collected water by precipitation, the trails need to be trimmed by hypersound and radio waves (HAARP).
7. By trimming and natural diffusion a closed aerosol cover is formed.
8. This aerosols cover flows with the wind and accumulates more water, that sinks down 1 or to kilometers.
9. To prevent losing this water again, a new dust cover need to be build about 4 km above the first aerosol cover etc.
10. During all this process the collected water masses flow with the wind and reach their target, which is for European hemisphere the Arabian Desert!
11. On this way sometimes big chunks of the water fall on the ground and destroy islands like Mallorca or towns like Rome.
How the #water #lift of #SRM with #chemtrails works.
http://geoarchitektur.blogspot.de/2014/10/blog-post_17.html
See how the #water #conveyorbelt by #SRM with #chemtrails works.
http://geoarchitektur.blogspot.com/p/the-conveyer-belt.html
What You observe is not an "anomaly" but the visible implementation of what I call Tropospheric Water Theft (Management) by Sunlight Robbery Menace.
Your pictures show the aerosol cover and the trimming by radiation.
Please read my articles on VeteransToday.com and also the linked ones.
I am only writing about this topic in all its impact.
You can observe the results of successful water delivery in Arabia!
Coordinates of #WATER #THEFT!
http://geoarchitektur.blogspot.de/p/coordinates-of-water-theft.html
Auxiliary spillway? Arabian soil washed away!
http://geoarchitektur.blogspot.com/p/all-arabia-is-one-spillway.html
ELEPHANT in the room is #SRM for #water #theft! Extreme weather!
http://geoarchitektur.blogspot.com/p/water-delivery-by-tropospheric-srm.html
http://geoarchitektur.blogspot.de/p/water-deliver-with-srm.html
http://geoarchitektur.blogspot.de/p/water-delivery-by-tropospheric-srm_1.html
This is Rome now!
https://twitter.com/severeweatherEU/status/1054112421143552002
https://twitter.com/severeweatherEU/status/1054143824199643136
This is Spain these days.
https://twitter.com/Danbokeron/status/1053977085801316352
https://twitter.com/severeweatherEU/status/1054054921597870085
This is Arabia now!
https://twitter.com/swayan888/status/1054022908044025856

yourotherperspective.com
Health Editor’s Note:  Here is part 3 of HAARP Waves, the final portion, written by Enkidu Gilgamesh.  The article covers the ultimate weapon, X-brand, some sources, and cloud images. You can find parts 1 and 2 by going to the bottom of this article and clicking on the links…..Carol
HAARP Waves!  Get Analog Radios!  You Can See, Hear, and Feel the Climate Control Part 3
By Enkidu Gilgamesh
The digitalization of radio, the freeing of VHF serves the reservation of the high frequencies for the make of the ozone layer transparent and increase the sunlight input (particularly UVB and UVC) for managing global water cycle within the troposphere!
CONTENT
7. The ultimate weapon?
Ralf Zerbe “The case with the.. pulsing ..of the waves is quite possible, as I already said, the impact of the HAARP facilities cannot be limited only on the cloud formations and the driving of them as well as the heating of the ionosophere.
I know that it may sound unimaginable for many people but HAARP is an all-purpose weapon. It serves also as an defense shield of communication and as a weapon against all biology and it is also used for transmission of thought with specific frequencies, therefore mass manipulation is possible.
Some may now believe…
That the guy has become confused.
Unfortunately not…. I cannot believe it but I have read it by myself in a PDF about HAARP … The patent.
Because of that I was a little bit reclusive to recover myself, because it is sheer unbelievable.
Many people claim about headache or indisposition and other impact. The human being is a very sensitive creature and reacts in different ways on variations as well as fast changing temperatures and changing air pressure or even frequencies and waves.Is that the reason why the people are sleeping and cannot see or don’t want to see, because they are manipulated by the radio and tv and the many senders and sending tower facilities?“

“The system and its functionality have been made highly sophisticated now and it is possible to install it into many gadgets, which is shown in some drawings. But first the concerned wave form.”

“These gadgets can be installed in several ways, both on vehicles, satellites and also on helicopters or high poles etc. On this schematic drawing it is clearly visible that these waves or their pulsing can also .. CROSS .. buildings if they are powerful enough.”
X-Band Radar Systems….(aka quake-makers) ‎Gina Gross‎ an Geoengineering Watch California
“The Sea-Based X-Band Radar (SBX-1) is a floating, self-propelled, mobile radar station designed to operate in high winds and heavy seas. It is part of the U.S. Defense Department Missile Defense Agency (MDA), Ballistic Missile Defense System (BMD) and is mounted on a fifth generation CS-50 twin-hulled semi-submersible drilling rig. Conversion of the vessel was carried out at the AmFELS yard in Brownsville, Texas; the radar mount was built and mounted on the vessel at the Kiewit yard in Ingleside, Texas, near Corpus Christi. It is meant to be based at Adak Island in Alaska but can roam across the ocean to detect incoming ballistic missiles.”
https://www.sinodefenceforum.com/sbx-1-sea-based-x-band-ra…/
https://www.gim-international.com/…/satellite-radar-interfe…
“Most SAR satellites operate with C-band wavelengths, but in the last decade X-band and L-band systems have been launched as well. Knowing both the wavelength and the baselines between SAR image acquisitions is important for using InSAR and interpreting the results, as will be explained further on in this article.“

It is creating such structures! 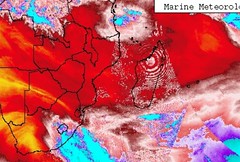 Gina Gross Key Facts/Features of SBX-1:
“– The SBX-1 serves as the largest and most sophisticated phased array electro-mechanically steered X-band radar in the world. Steering electronically within its field of coverage and mechanically in azimuth and elevation allows the radar to track a full 360 degrees in azimuth and about 90 degrees in elevation from near the horizon to the zenith. As a result, the radar can track objects as they fly toward, over, and away from the vessel.“
“– Approximately 45,000 transmit/receive modules in the radar operate together to form the radar beam, which is capable of seeing an object the size of a baseball at a distance of 2,500 miles. Each module consists of the final transmit stage and initial receive stage from each antenna element. The radar also uses 69,632 multi-sectional circuits to transmit, receive, and amplify signals.“
“– The SBX-1, which is capable of traveling 9 knots under its own power, measures 240 feet wide, 390 feet long, and 280 feet high from its keel to the top of the radar dome (radome).“
“– Air pressure alone supports the radome that surrounds the radar. The radome weighs 18,000 pounds, stands more than 103 feet high, and measures 120 feet in diameter. Moreover, the high-tech synthetic fabric allows the radome to withstand winds in excess of 130 miles per hour.“
“– The SBX-1 crew includes approximately 86 officers, civilians, and contractor personnel to carry out its mission.“
“– In addition to the inherent stability of the vessel, the radar itself provides electronic stabilization of the radar beam to continue mission operations as the vessel responds to changing sea conditions.“
“– The marine diesel fuel capacity of the SBX-1 is 1.8 million gallons.“
“– As the principle midcourse sensor for the BMDS, the radar’s major functions are cued search, precision tracking, object discrimination, and providing a missile kill assessment. The In-flight Interceptor Communication System Data Terminal communicates instructions from the GMD Fire Control.“

So we recognize, that the climatecontrol is always interwoven with the military use!
Can HAARP manipulate storms, hurricanes, and earthquakes?https://www.bibliotecapleyades.net/haarp/esp_HAARP_26.htm
Hurricane Maria is not “spinning”, it is SPINNED!
You can observe how the storm is whirled with HAARP waves!

https://www.veteranstoday.com/2018/10/20/haarp-waves-see-hear-and-feel-the-climate-control-part-3/
EISCAT (European Incoherent Scatter Scientific Association)
https://en.wikipedia.org/wiki/EISCAT
“EISCAT (European Incoherent Scatter Scientific Association) operates three incoherent scatter radarsystems, at 224 MHz, 931 MHz in Northern Scandinaviaand one at 500 MHz on Svalbard, used to study the interaction between the Sun and the Earth as revealed by disturbances in the ionosphere and magnetosphere. At the Ramfjordmoen facility (near Tromsø, Norway), it also operates an ionospheric heater facility, similar toHAARP.”
Wie Haarp und Überwachungstechnik wirklich funtioniert!
http://gefoltert.blogspot.com/2014/03/vieles-ist-bis-jetzt-uber-haarp.html
Five new HAARP sites in consruction! Norway disables he UKW radio frequencies – real background (video)
https://www.pravda-tv.com/2015/05/fuenf-neue-haarp-anlagen-im-bau-norwegen-schaltet-den-ukw-funk-ab-wahre-hintergruende-video/
The high frequencies are used for the tropospheric radiation, lifting and management of global water cycle. They use the thermal heat during night and day, but they lift the water layers also by high-frequency radio waves and hyper sonar in to the upper troposphere!
The UKW radios will be forbidden soon!
.
9. Cloud images