The NASA Shuttle has imaged a mysterious ancient bridge between India and Sri Lanka. The bridge was purportedly passable on foot until 1480 AD when a cyclone moved the sand around.

This recently-discovered bridge has been found to be made of a chain of limestone shoals. Its unique curvature and composition by age reveals that it is man made. The bridge currently named as Adam’s Bridge (most popularly known as Ram Setu) is about 18 miles (30 km) long.
This bridge starts as chain of shoals from the Dhanushkodi tip of India’s Pamban Island and ends at Sri Lanka’s Mannar Island. Water between India and Sri Lanka is only 3 to 30 feet (1 to 10 meter) deep. Owing to shallow waters, this bridge presents a problem in navigation as big ships cannot travel in the shallow waters of the Pamban channel.
This information is a crucial aspect for an insight into the mysterious legend called Ramayana, which was supposed to have taken place in tredha yuga (more than 1,700,000 years ago). Ages before modern civilization revolutionized this part of the globe.
In this epic, there is a mentioning about a bridge, which was built between Rameshwaram (India) and Srilankan coast under the supervision of a dynamic and invincible figure called Rama who is supposed to be the incarnation of the supreme.
This information may not be of much importance to the archeologists who are interested in exploring the origins of man, but it is sure to the spiritual gates of the people of the world to have come to know an ancient history linked to the Indian mythology. 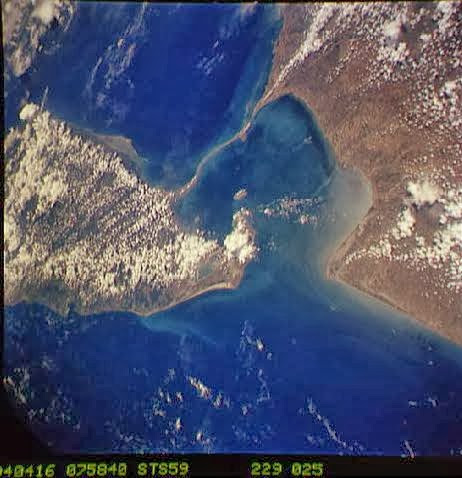 According to Hindu Mythology, Rama had built this bridge in the ‘Treta Yuga’ (which dates back to 1.75 million years ago) to reach Sri Lanka, where his stunningly beautiful Queen ‘Sita’ was held captive by the notorious demon king, ‘Ravana’. Rama sought help from ‘Hanuman’, another extremely revered Indian mythological figure, considered to be the Indian monkey god, to rescue Sita. Hanuman, the commander-in-chief of the rescue operation, ordered his troops, consisting of thousands of monkey men, to carry out the task of building the bridge to create a path, which leads to the island nation of Sri Lanka.
A source on the internet, claims that the bridge was constructed after Hanuman consulted the duo ‘Nal’ and ‘Neel’, who belonged to the ‘Vanar Sena’ (Monkey Army) , and were apparently the world’s best architects of the time. Nal and Neel were said to be experts in making heavy objects float easily on the water surface.
An eminent Indian researcher, Mr. S KalyanaRaman , says that the nature of the stones used in the construction of the bridge have been mentioned in the Hindu mythological text, ’Ramayana’. He further adds that, from a geological perspective, the stones were formed after an accumulation of corals over a long period of time , like fossils.
The Indian government, in the year 2001, approved the construction of ‘The Sethusamudram canal Project’, to facilitate the creation of a ship channel across the water stretch between the two countries, by dredging the ocean floor. 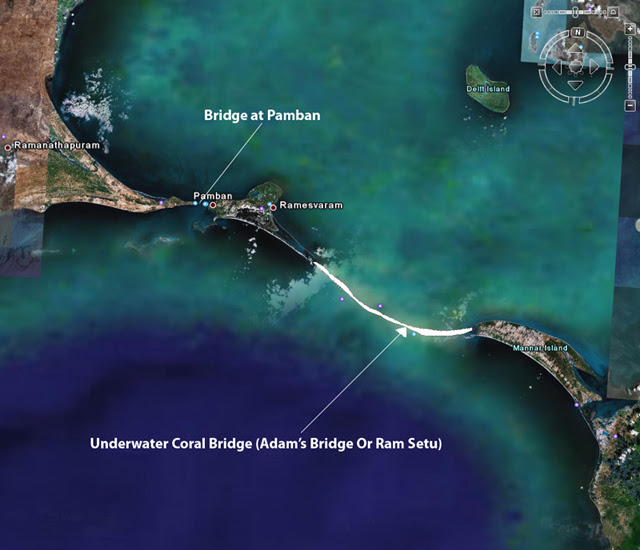 However, Political leaders, belonging to different parties, in the past, have strongly expressed their opposition to the central government’s ambitious project, owing to religious taboo. In their opinion, the initiation of such a project would hurt the sentiments of thousands of Hindu believers.
While lot of research enthusiasts across the world have applauded NASA’s marvel  for its remarkable feat, on the other hand, the discovery has also sparked exponentially growing criticism from many people across the world, for being an unnecessarily hyped hoax.
Prabir Purkayastha, an Indian writer, in his article, has stated that the whole story of the so called discovery originated from an ISKCON website called Vaishnava news network and was further propagated by other online forums belonging to Hindu fundamentalists.
It is said that the mutual understanding between ISKCON and various other Hindu radical outfits, has led to the creation of this fraudulent piece of information to prove their claims of the bridge’s existence according to ancient mythology. Purkayastha, also feels that the news was deliberately put across with an aim to garner the acceptance of thousands of modern, well-educated Indians located across the world who have outcast these religious groups over the years. 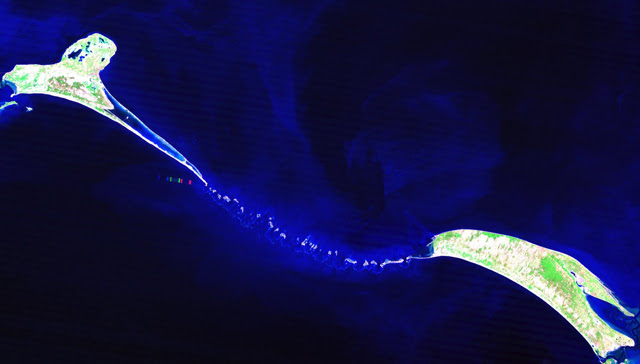 Many readers, across various online forums, where this news was shared, have strongly disagreed to the belief that the bridge was damaged by a cyclone in the year 1480 AD. One such surfer, on a discussion forum, had quoted that “if the earth is prone to natural disasters of varying severity levels, then it’s highly impossible for a bridge that has withstood various calamities over more than a million years, to not survive a cyclone”.
NASA, however, has rubbished claims of the people who termed the discovery a big hoax. The US based big Daddy of science, took a politically correct stand by saying that the pictures were photographed by their gadgets stationed in space and were not fabricated, thus not denying the Hinduism logic . NASA has also declared the structure to be man-made, winning the hearts of many Hindu fundamentalists.
Adam’s bridge has made lot of people go gaga over the years, and all we can say, is that this discovery has just added fuel to the fire.
Source: whydontyoutrythis, welikeviral

First, the image is not from a NASA shuttle. The shuttle hasn’t flown in decades. The image, before it was doctored, is from the Landsat satellite. And, the evidence points to it not being man-made, and second, not being man-made 1.7 million years ago.:
Age
In a programme called “Project Rameswaram”, the Geological Survey of India (GSI) concluded through the dating of corals that Rameswaram Island evolved beginning 125,000 years ago. Radiocarbon dating of samples in this study suggests that the domain between Rameswaram and Talaimannar may have been exposed sometime between 7,000 and 18,000 years ago.[28] Thermoluminescence dating by GSI concludes that the sand dunes between Dhanushkodi and Adam’s Bridge started forming about 500–600 years ago.[28]
Investigation by the Centre for Remote Sensing (CRS) of Bharathidasan University, Tiruchi, led by Professor S.M. Ramasamy dates the structure to 3,500 years.[34] In the same study, carbon dating of some ancient beaches between Thiruthuraipoondi and Kodiyakarai shows the Thiruthuraipoondi beach dates back to 6,000 years and Kodiyakarai around 1,100 years ago. Another study suggests that the appearance of the reefs and other evidence indicate their recency, and a coral sample gives a radiocarbon age of 4,020±160 years BP[32]
Yours for accuracy, better science and less BS.