THE RICH GET RICHER WHILE THE POOR GET POORER: "Thousands queue for food parcels in Dublin city centre" IRISH TIMES 25 DEC. 16

Number of people receiving food from Capuchin Centre will ‘probably go over 3,000’ 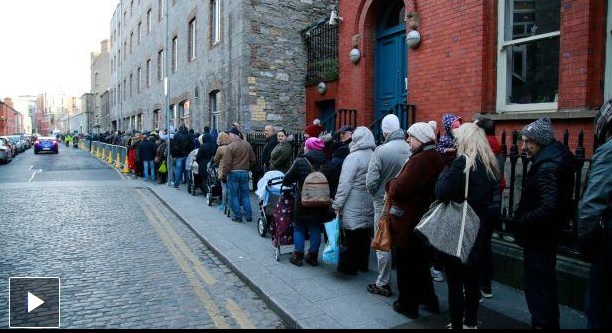 Danny, an elderly man from Fairview in Dublin, will share his food parcel on Christmas Day with a neighbour who also lives alone.
“He has a bad hip so he couldn’t come here today. I’ll share mine with him,” he smiles.
Danny, who doesn’t want to give his surname, is one of more than 3,000 people queueing for Christmas food parcels at the Capuchin Centre in Dublin on Thursday.
The queue, which includes elderly people and young children, began about 6am. By 9.30am it stretches from the door of the centre’s Bow Street entrance down the street, around the corner and along May Lane reaching Church Street.
Br Kevin Crowley, who runs the centre, believes the queue is “bigger than last year”. A number of gardaí, present because of the numbers, are in good humour and chatting with those queueing.
Danny explains he is on a disability pension and lives in a two-room flat, for which he pays €150 a week. He is “lucky” with his landlady who is good to him. The maximum he is permitted to pay, however, is €109 a week to qualify for his €74 a week rent allowance.
“I could apply for a higher rent allowance, but I’d have to tell them how much rent I’m really paying, and if I didn’t get the increase they [Department of Social Protection] could tell me I have to leave the flat. I can’t take that risk. It is a struggle.
“I come here most Wednesdays for a food parcel and that helps.” 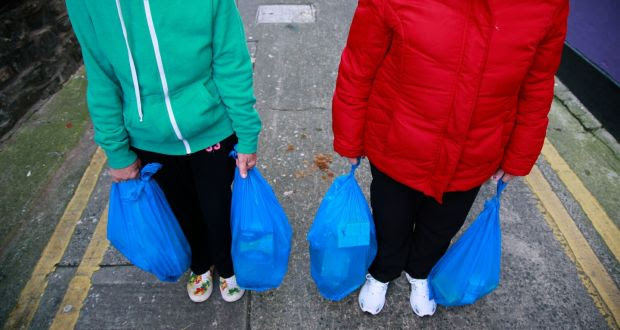 Bedding and clothing from a rough sleeper in a doorway at Pearse Street Garda station. Photograph: Nick Bradshaw 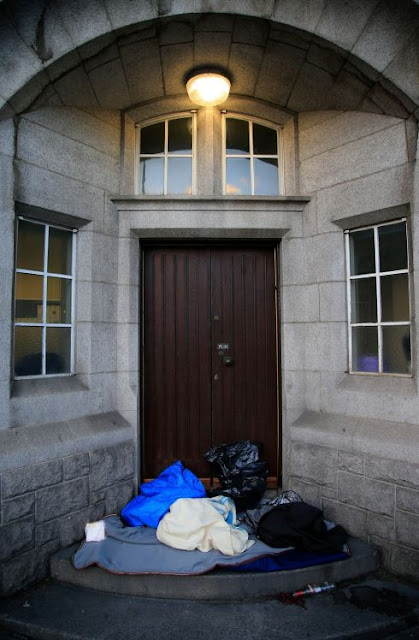 Last Christmas the centre gave out about 2,500 Christmas parcels.
“But this year I think it will probably go over 3,000,” says Br Kevin. “It is shocking, but I am not surprised. What is really appalling to see is the number of children coming here, mothers with children.
“The Government may say there’s a recovery, but there is no recovery for the poor.”
As we speak, several people queuing call over to Br Kevin, thanking him and wishing him a merry Christmas. Two members of the public approach with donations.
Each person queuing has a ticket entitling them to two blue plastic bags of food – one of non-perishables including tea, sugar, cereals, tinned fish, tinned beans, custard, chocolates and biscuits, and one of such perishables as milk, cheese, a chicken and butter.
“We have been giving out tickets to people since last Wednesday, who come to the centre,” explains Br Kevin.
Inside, blue bags are stacked in their thousands against walls for distribution. Among those who has just collected two bags of food is Mandy Cotter, who has travelled from Balbriggan with her baby girl.
“I was queuing about an hour. I’m on lone parents and I’m doing a course, so it is a struggle and if I didn’t get this I would be very short. This will get us through.”
Joan Ayiro, a single mother, has come in from Tallaght. “I have one son. I am in college in the city and it is difficult. I am so grateful to get this help.”
Two other mothers, both homeless and in emergency accommodation in the Summerhill area, do not want to give their names. They will spend Christmas Day in their accommodation and want to make “at least Christmas Day special” for their children.

.
They have cooking facilities and say the food parcels are “extremely important” as it means they can get “decent little presents” for their children.
“I’m not really looking forward to Christmas,” says one, explaining it is her second in emergency accommodation. “It is just amazing to me that the Irish people are so generous and want to do something about homelessness, but it’s the Government who won’t take a stand.”
The centre will serve breakfast and lunch on Christmas Eve as usual, closing Christmas Day and reopening for breakfast and lunch on St Stephen’s Day.
“We can do this because of the generosity of people and the volunteers,” says Br Kevin.
The centre’s annual running cost is €3.3 million, of which €450,000 comes from the Government.

source:  http://www.irishtimes.com/news/social-affairs/thousands-queue-for-food-parcels-in-dublin-city-centre-1.2915478
Posted by butlincat at 10:42 am