Simon Kenny, 61, and his assistant Emma Coates, 47, ransacked the customers’ funds at CK Solicitors in Selsey, West Sussex for four years.
Southwark Crown Court heard the company’s reporting accountant Robert Foskett committed suicide after he ‘realised he had been lied to’ about the plot.
Coates paid off four mortgages, spent £15,000 on a log cabin and a hot tub to cavort in and bought a Range Rover, jurors heard.
The fraudster also took 12 friends for a lavish trip to a resort in Barbados with the stolen cash.
Police later discovered she had been making mortgage payments on four properties - two in Selsey, and two others in Chichester and Bognor Regis.
But while they lived a life of luxury their accountant became so depressed that he killed himself.
Kenny, who has business interests in the Far East, told staff he had moved cash to offshore accounts because of the Northern Rock bank crisis.
He and Coates had been lovers, but their affair cooled in 2010 and they later blamed each other for the con.
It lead to the closure of CK Solicitors and a major investigation by the Sussex Police major fraud unit.
Kenny was suspended from his role as a deputy district judge at a county court in Sussex while he stood trial for two counts of fraud.
Prosecutor Richard Milne said: ‘Mr Foskett’s dawning realisation in February 2011 that he had been duped back in 2009 appears to have been a major factor leading, tragically, to his suicide on 6 March 2011 - just two days before the commencement of the first of the relevant SRA investigations.’
Jurors saw his suicide note, which read: ‘I am so sorry but the pressure mounts on me. I was lured into signing an audit certificate by Simon Kenny which I should not have.

Copy link to paste in your message
Kenny and assistant Emma Coates (pictured) ransacked customers’ funds at CK Solicitors in Selsey, West Sussex for four years
‘He assured me funds would be the following week from his family trust but that became untrue.’
Mr Foskett also left a note to his secretary which read: ‘It has been revealed to me that I think with Simon Kenny we have tumbled on a fraud that is probably £300,000, it may even be £600,000 or even more.
‘Quite nasty... unfortunately when people do this sort of thing they don’t care a damn who gets hurt.’
Stephen Hiseman, 60, a ‘fee earner’ from CK Solicitors, also swindled two clients.
The court heard he ‘fraudulently caused the transfer of £60,000 from CK Solicitors client account to an account of Chris Coxill and then to an account in his name’ between November 2010 and March 2011.
Hiseman also told client Samuel Swanton he had settled his debts with Lombard North Central for £15,000 between June 2010 and December 2011 - but he had actually only settled for £10,000, forcing Mr Swanton to sell his house to raise funds.
The Solicitors’ Regulatory Authority shut down CK Solicitors in May 2011, but within months Coates had set up another firm, Coates and Co, and stole £85,000 from an elderly client’s will when she died in 2011.
Mr Milne told jurors: ‘Over a period of several years client monies were misappropriated by Simon Kenny, Emma Coates and Stephen Hiseman.
‘In the case of Mr Kenny and Miss Coates, the misappropriation mainly took the form of diverting client money from the company’s client account to the office account and then expending that money not in relation to the client matter in question, but for their own use or for the use of the firm.’ 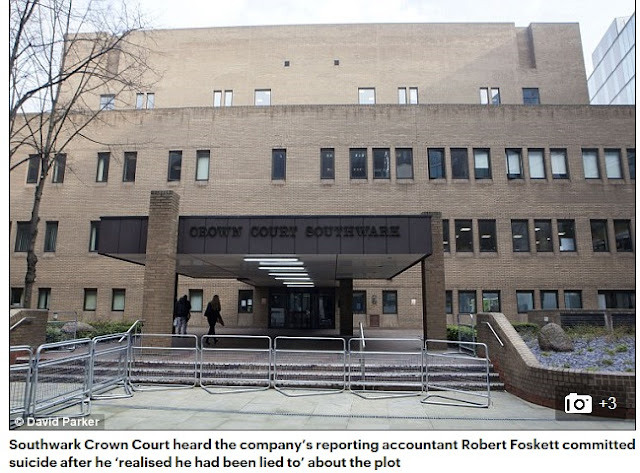 A jury convicted Kenny, of Catsfield, near Battle, East Sussex, of two counts of fraud totalling £1million after he made ‘fraudulent transfers of monies between the firm’s client account, office account, and himself’.
He denied involvement in the crime and even claimed Coates must have hacked his email account and sent messages in his name to pull off the scam alone.
Coates, of Selsey, West Sussex, was convicted of two counts of fraud totalling more than £415,000, but she was cleared of another two counts of fraud.
The pair were remanded in custody ahead of their sentencing on 27 January.
Mr Milne said Kenny, an Australian national, was a potential flight risk because ‘even if his passport was surrendered there would be no problem with him leaving the jurisdiction and going to an Australian embassy’ to get travel documents.
He added: ‘It’s not the most difficult thing for a determined fugitive from justice to do.’
The court heard Kenny had been looking to move abroad before the trial and has ‘business interests in the Far East’.
Hiseman, of Morzine, France, was released on conditional bail after he was convicted of two counts of fraud.
He has been ordered to surrender his passport, stay at an address in the UK and observe an electronically monitored curfew between 7am and 7pm.