Former Justice Secretary Liz Truss took the decision to keep a devastating report into the effectiveness of sex offender rehabilitation courses secret.
The Government is hiding a devastating report that shows rehabilitation courses taken by thousands of jailed rapists and paedophiles make them more dangerous once they are released.
According to the study, prisoners who take the courses are at least 25 per cent more likely to be convicted of further sex crimes than those who do not, suggesting that the sessions may have created hundreds of extra victims.
The controversial Sex Offender Treatment Programme (SOTP), a six-month psychological group-therapy course, is believed to have cost taxpayers well over £100 million since it was set up in 1991.
Before the report was compiled, about 1,000 prisoners had been taking the 'core' programme at a cost of about £7 million a year, many at eight sex offender treatment 'hubs' – specialist jails where thousands of such criminals are concentrated.
The worst offenders went on to an 'extended' course, which was also found to make them more dangerous. An investigation by this newspaper has revealed:

Broadcaster Stuart Hall is one of several high-profile prisoners said to have taken the now-discredited SOTP to qualify for early release from HMP Wymott (pictured)
The Ministry has obtained legal advice about the report's likely impact. It warns that victims attacked by programme 'graduates' after their release may be able to sue the Government for damages.
Even sex offenders whose release was delayed while they waited for places on the courses could sue – leading to a cost to taxpayers that could run into millions.
There are more than 11,000 sex offenders in jail, an eighth of the prison population. The SOTPs were introduced as part of a wave of 'cognitive behaviourial' courses that swept British jails in the 1990s. Other programmes, such as anger management sessions aimed at reducing violence, are still in use.
In the SOTP, those convicted of sex crimes work with a course facilitator in groups.
They attempt to examine the reasons for their crimes, and to change the mental attitudes behind them. Often, this involves discussing graphic details of their offences with fellow inmates.

There have been numerous documented cases of criminals who underwent the SOTP and committed brutal crimes on their release.
One of the worst was Clive Sharp, who took the course after being convicted and jailed three times for sexual attacks over a 30-year period, starting when he raped an underage girl when he was 17.

He told his SOTP facilitator in the 1990s that he fantasised about tying up a woman, then raping and murdering her. In October 2012, after his last release, he fulfilled it when he invaded the North Wales home of vet Catherine Gowing, sexually tortured her, then killed and dismembered her. He is now serving life with a minimum 37-year term.
Another was Tony Rice, who raped, strangled and fatally stabbed Naomi Bryant in Winchester in 2005, just nine months after being released on licence from a life sentence imposed for three rapes and sexual assaults.

He won his freedom after taking the SOTP. The coroner at Naomi's 2011 inquest said the case was 'a wake-up call for those involved in offender management'. Rice is again serving life.
Recent cases have involved paedophiles such as former social worker John Hoar, who was jailed for three years and eight months at York Crown Court in February for distributing images of children – some as young as five – being raped and tortured. He took the SOTP during a previous sentence for possessing child pornography.

Last month, Michael Wood, from Welwyn Garden City, was jailed for six-and-a-half years for having sex with an underage teenager and possessing child pornography.
He had three previous convictions for paedophile activity, and after the last, for a sexual attack on an underage girl in 1997, he had passed the SOTP.

High-profile prisoners who have taken the SOTP reportedly include former broadcaster Stuart Hall, who in 2013 pleaded guilty to assaulting 13 girls, the youngest just aged nine.

Presenter Hall, 87, pleaded guilty in 2013 to attacking 13 girls aged nine to 17 and was jailed for 30 months, and received a further 30 months the following year for two more attacks. He was jailed at HMP Wymott

Successive governments have made bold claims for the SOTP's success in curbing reoffending. As recently as April – after the damning report was delivered, and the programmes were secretly axed – the MoJ website claimed they had 'demonstrated that they are based on sound evidence on what techniques and interventions help offenders to change', and there was 'international evidence' that they reduced reoffending.

However, some experts have disputed such claims for many years. One was William Marshall, whose own, very different sex offender rehabilitation programmes in Canada have been shown to achieve huge cuts in reoffending rates.

Until 2004, Dr Marshall was employed as an external consultant to SOTPs in Britain. But exasperated by what he saw as the programme's shortcomings and the Government's failure to remedy them, he resigned. 'There were a lot of problems with SOTP and I didn't want to be identified with a programme I didn't agree with,' he said. 'They weren't adapting the course in line with developing knowledge, and many of those delivering the programme were not qualified.'
.
CENTRES TREATED ABUSERS LIKE STUART HALL
.

Stuart Hall is said to have taken the SOTP
Broadcaster Stuart Hall is one of several high-profile prisoners said to have taken the now-discredited SOTP to qualify for early release.
The presenter, 87, pleaded guilty in 2013 to attacking 13 girls aged nine to 17 and was jailed for 30 months, and received a further 30 months the following year for two more attacks.
After reportedly taking the SOTP at Wymott prison in Lancashire, he was freed in 2015 after serving half of his total sentence.

The worst problem was that the numbers being enrolled on the courses were 'far too ambitious', leading to a shortage of qualified therapists. In fact, most SOTP facilitators were chaplains, ordinary prison officers and other 'para-professionals'.

According to Dr Marshall, their lack of training meant that the facilitators were forced to stick rigidly to 'scripts' drawn from a thick SOTP manual. He said: 'Manuals take the therapist out of the loop. For sex offender treatment to succeed, you have to be flexible enough to keep adapting to every individual. A revamp is long overdue.'

Dr Marshall said he was 'amazed' that the new report was being kept secret, adding: 'Why waste time doing research if you're not going to publish it?'

Another prominent sceptic was David Ho, a forensic psychiatrist who has treated some of the country's most disturbed offenders at Broadmoor, and is now research chief at a secure unit in Essex.

He said: 'I'm not surprised by the new evaluation. Both the academic community and the public have the right to see the full results.' Previous studies claiming SOTPs worked were fundamentally flawed, he said – as he had been arguing for years.

Questioned repeatedly by this newspaper, the MoJ refused to release the full data behind the secret report's headline results. But multiple prison service sources have told us that the study, based on many hundreds of offenders who went through the SOTP between 2002 and 2012, found reoffending rates 25 per cent higher than a comparison group who did not take the courses.

Overall, the MoJ says 13.2 per cent of sex offenders will be convicted of another sex crime within a year of the end of a sentence.

The MoJ was forced to accept the results when they were independently endorsed in a review by Professor Dietrich Lösel, emeritus professor at the University of Cambridge Institute of Criminology.

Prof Lösel confirmed he had endorsed the report, but said he was prohibited from speaking about it until it had been published 'but I don't know when this will happen'.
Once it became clear that the SOTP made prisoners more dangerous, the pressure to axe the programme became irresistible. As one MoJ insider put it: 'If this was a medical trial of a new drug, you would stop the trial immediately.'

But the decision not to publish the report means prison staff and prisoners have been left in limbo.

'All we know is the course has been stopped,' one senior officer said. 'We have not been told why.' Worst affected are some of the thousands of prisoners serving indefinite sentences for public protection, who had been waiting for a place on the courses before they could be considered for release.

New courses to replace the SOTP are in the pipeline. But they remain untried and untested, and it is unclear when they will be widely available.

Nick Hardwick, chairman of the Parole Board, last night called on the MoJ to publish the report. 'The test when we consider an application for parole is whether we are satisfied that a prisoner's risk of reoffending has been reduced, and whether they are safe to release,' he said. 'People need to understand what works and what doesn't.'

An MoJ spokesman said: 'Public protection is our top priority, and we keep treatment programmes under constant review to reduce reoffending and prevent further victims. We are now in the process of rolling out new programmes and all offenders have either already started their new course, or are being assessed for targeted support.'
.
THE HUB GRADUATES WHO WENT ON TO RAPE AGAIN 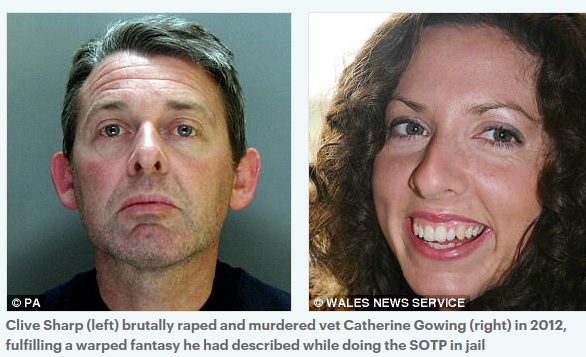 Clive Sharp brutally raped and murdered vet Catherine Gowing in 2012, fulfilling a warped fantasy he had described while doing the SOTP in jail.

Before killing Catherine, he had served three separate sentences for horrific sex crimes, the first when he raped a girl when he was 17.
He is now serving life with a minimum 37-year term. 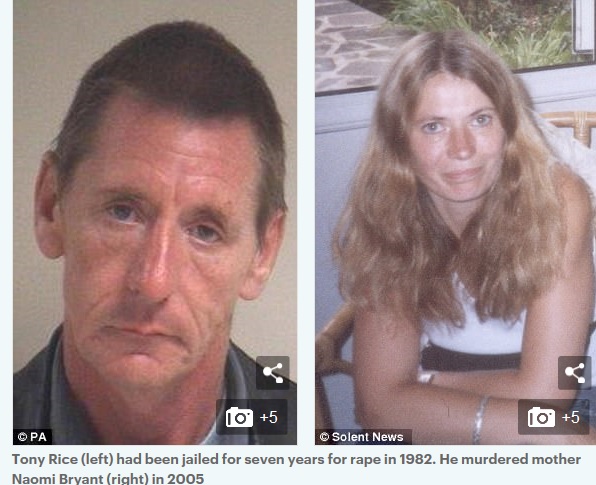 Tony Rice, raped and murdered mother Naomi Bryant in Winchester in 2005 after being released on licence from an earlier life sentence for three rapes, for which he served 16 years.
He had also been jailed for seven years for another rape in 1982. He was freed to kill Naomi because the Parole Board decided that, having taken the SOTP, he was ‘safe’.