Days ago soldiers stormed my house in the dead of night and dragged my 16-year-old daughter to prison. Now my little girl is in a cold cell, alone.

I have dedicated my life to civil resistance. That's why the army is holding my baby -- they want to crush our spirit. But I have been a member of Avaaz for eight years -- I have seen the power of this community if we all stand together against injustice.

My little girl's case goes to court on 31 January -- that's our chance to get her out and shine a light on hundreds of other child prisoners just like her. Please join my urgent call below with one click -- we’ll deliver it directly to global leaders:

Free Ahed and all child prisoners

To all world leaders:

"We demand that Ahed and all Palestinian children are released from Israeli prisons now.

The international community must put an end to the ill-treatment and detention of Palestinian children. Enough is enough.

To Ahed and all the children in Israeli jails: We stand by your side, and are holding you in our hearts. We will not give up until you are free. You are not alone."

Free Ahed and all child prisoners

When I saw her in court she was pale and shivering, shackled and clearly in pain. I wanted to cry but I couldn’t, I have to stay strong so she stays strong.

The judge just refused bail and now my child could spend years behind bars. They took her away for slapping a heavily armed commander after his soldiers shot her little cousin in the face. Now they are charging her with 12 new crimes. There is no reason for her to be held while the case goes to trial.

Over 12,000 Palestinian children have been arrested since 2000! No matter where you stand on this conflict, we can all agree no child should be thrown into prison.

I have personally reached out to diplomats. But my voice alone is not strong enough. That's why I'm appealing to you to stand with me now. We know the military judges don’t want global attention on them, and Israel's politicians don't want the issue of child prisoners to become a massive public scandal. Add your name -- we only have days:

Free Ahed and all child prisoners
Our Israeli lawyer has presented multiple precedents to the court of adult Israelis who slapped soldiers and were released within hours. But even though my daughter is a child, she’s Palestinian. 99% of cases against us are convictions in this military system.

I have been inspired by this movement's strength and passion for freedom, justice, and creating a better world for the next generation. That's why I am reaching out to you -- because I know that if anyone can free my daughter and all the children it is the Avaaz community.

With hope and determination,

Basem Tamimi with the Avaaz team 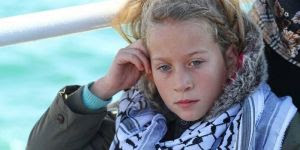 My 16-year-old daughter was dragged out of her bed in dead of night and arrested. Even though she is just a child, the military refused to release her. She could spend years in jail. I have dedicated my life to achieving peace and justice in the Middle East. That's why the army is holding my baby -- their revenge is to crush my family. All I want is to hold my daughter again. With one click, please join my appeal to get her out:

Ahed Tamimi to be held in prison throughout her trial (DW)
http://www.dw.com/en/ahed-tamimi-to-be-held-in-israeli-detention-throughout-her-trial/a-42193150

THE PALESTINIAN HEROINE THAT WENT VIRAL

Posted by butlincat at 6:14 am