January 14 2018, 12:01am, The Sunday Times
David Gauke has asked lawyers to prepare the case for a judicial review of the decision by the Parole Board, and officials say Gauke will trigger the legal challenge if it has a “reasonable” chance of success.
He made the move after four cabinet ministers privately warned him that the decision to set Worboys free could be unlawful because his victims have not been consulted about the terms of his release.
Worboys was jailed in 2009 after being convicted of drugging and sexually assaulting 12 women and raping one, but another 93 women made complaints about him that have never been tested in court.
The dramatic move came as The Sunday Times obtained a letter written by Martin Jones, the chief executive of the Parole Board, in which he admitted: “I can well understand why victims and the public find it impossible to understand our decisions if we are not able to explain our reasons; or indeed disclose the full licence conditions.” He claimed that “the panel took full account of the victim representations ”.
Victims, their lawyers and MPs said this was untrue, however, and that there had been three clear breaches of proper procedure:
● Victims found out about Worboys’ release from the media
● They have not been consulted by the Parole Board about the conditions of his release
● Worboys is expected to live in London despite demands that he be relocated.
One cabinet minister described the case as “deeply troubling”, while Sadiq Khan, the mayor of London branded the release “astonishing” and said Worboys should not set foot in London, where he carried out his “grotesque crimes”. Khan is also taking legal advice on how to respond.
Michael Gove, a former justice secretary, said of Gauke when speaking to The Sunday Times: “I’m sure he’ll do the right thing.”
In a letter to the Parole Board, Zac Goldsmith, who is MP to two of the victims, branded the failure to consult them “a deeply insensitive and thoughtless omission”. He said releasing Worboys would be “unforgivable” and added: “The government must now launch an urgent judicial review into the Parole Board decision.”
A Ministry of Justice spokesman confirmed: “The secretary of state commissioned advice last week about the plausibility and potential success of a judicial review; he is minded to move forward if there is a reasonable prospect of success.”
Former minister Anna Soubry, a criminal barrister, has written to Nick Hardwick, the chairman of the Parole Board, declaring Worboys’ release “unlawful” because victims have been “denied their right to be heard”.
One of Worboys’ victims said: “Worboys is due to be freed in just over a week’s time and yet I still haven’t been informed as to how or when I will be consulted on his licence conditions — despite being promised I would be.
“Instead, I read that the licence conditions have already been decided and that by the end of this month he will be allowed to roam free in London. I will have to move house because he knows my address and I am terrified that he will track me down and try to attack me again.
“If he is allowed into Greater London, I and the other hundreds of victims will have to spend the rest of our lives looking over our shoulders in fear. Ten years ago I was assured he would never be let out of prison, and now that he is I am being given zero assurances that he won’t reoffend. This isn’t justice, this is terrifying. I can’t sleep at night — I’m worried sick.”
They were supported by Khan, who said: “If the Parole Board won’t review its decision to release Worboys then it should listen to his victims and at the very least impose the necessary conditions to keep him away from the people whose lives he has already damaged so severely.”
Richard Scorer, a lawyer for 11 of the victims, said: “They have not been consulted and to suggest this might be the case is simply wrong. It is becoming increasingly clear that the Parole Board has made a catalogue of errors.”
A second victim, who says she was raped by Worboys, told the BBC she went to the police but they did not take the case forward “as they had 12 very strong cases they were going to use”. She added: “The first I heard about Worboys being released was from the radio. There needs to be a second prosecution.”
Justice ministry officials told The Sunday Times that victims would receive letters this week asking them to comment on the conditions of the release and said Gauke was demanding the “strongest possible” licensing regime.
A Parole Board spokesman said: “The board is confident the correct procedures were followed in this case.”
source:  https://www.thetimes.co.uk/edition/news/justice-minister-fights-to-keep-rapist-cabbie-john-worboys-in-jail-bnmhk7bfd 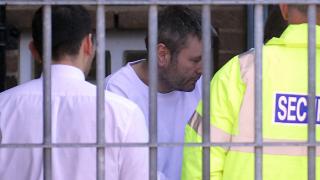 Huge rise in number of suspects hunted by police

Tom Harper and Adriana Urbano
The number of offenders who are suspected of committing crimes after being released from prison early has ballooned...
January 14 2018

Posted by butlincat at 8:38 am