MAURICE KIRK: Notes from HMP Parc: STILL DENIED RIGHTFUL MEDICATION AT THE PROPER TIMES, OR AT ALL – IS THE COMPANY G4S FIT TO BE EMPLOYED AT HM PRISONS? OBVIOUSLY NOT – 29 Jan.18 + archive

Received 29 Jan. 2018:
RCJ 1CF03361 – 201704259B4 JL
1] IMB have answered not one query from me in HMP Swansea or G4S controlled HMP Parc – so it was on no surprise to me that the prison chaplain Phil something refused even to contact my next of kin to where I was and the fact that I am still denied any medication prescribed . His attitude then caught even me by surprise as, in 2014 on previous breach of a restraining order never served on me in the first place, it was the only way sometimes, for my sister could establish as to what really is going on in a Welsh prison
2] Since 14th December 2017 no Cardiff court or lawyers, even in England, have replied [unreadable] help over RCJ appeal. The law firms contacted to act at “sentencing” also have not replied to any of my letters
3] My 25 recorded delivery letters to them, NHS [Wales] and associated MAPPA and MENTAL HEALTH CHARITIES and Societies etc. and CASWELL CLINIC offshoots continue to ignore, as do specific doctors who have already rebuked Dr. T. W. ex-bosses, before he ws sacked and had to mitigate, meaning all is far more sinister for other proposed victims
4] Pain last night, 3rd in a row with no or little sleep means I have stopped eating to alleviate the pain, as it was done of previous hunger strikes
5] I have been told, 3 times today, “you cannot get medication at weekends”.
6] With Cardiff Crown Court’s admission and next jury like a few before [believing what judges Paul Thomas, Crowther and Tracy Llord-Clarke uttered when proven false] – God help the locals.

28 January 2018 Complaint Re-refused Medical Care:
1] After being kept up again much of the night, due to guy pain the G4S officer said I could only apply in the mornings [note: during acute pain in the day – the bell is rarely answered]
2] This was at 19.47 hrs. and again at 21.09 hrs. with both nurses Cloe and Lisa at arrived at the same time, saying medication was not available at night – not even my prescribed “in possession” non “red box” non-restricted tablets!
3] Why I am still denied, day or night, since 14th December 2017 apart from only one on the 21st 2 tablets only at the medicine watch on 22nd and my last on 23rd?
4] Why can I not have access to my month’s supply “in possession” when gaoled, prescribed by my Brittany GP or my Taunton English GP property my brother wishes bring from England despite his last futile attampt to see me 2 weeks ago?
5] Why can I not pay from my maximum £15 / week I can spend on anything, yet, anything reasonable only on the “list”! Sister to get Jean-Claude + Katie in Merdrignac, my village, is a non-prescription drug, buy and post direct to my cell?
6] Why, after many weeks, am I still not allowed an apology [after being wrongly arrested…ed.], after being locked up over the weekend continuously, and 20 min. access to the library only once a week or exercise, to be denied a whole week’s canteen [meaning stamps] when cctv clearly identified the culprit banging on the “medicine hatch”, not myself? 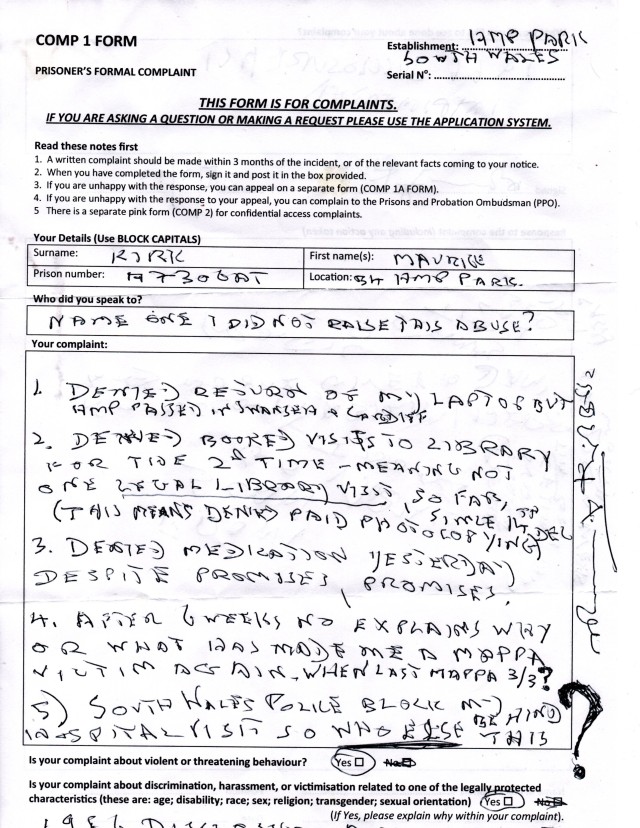 The above letter to the HMP Parc governor was typed out and sent, along with a letter asking why the numerous serious irregularities performed by the prison, including the illegal improper dispensing of MK’s prescribed medication, along with the non-disclosure of why he has been deemed a MAPPA 3 CAT. 3 subject, contrary to the 1966 Dislosure Act. A reply is not expected from this, what I deem is a particularly inept UK Government Public Servant – a public scandal!!
Archive continues with more recorded atrocities at HMP PARC: 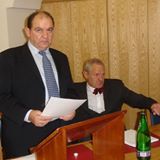 What happened to and where is Patrick Cullinane?  Maurice Kirk and PC, 2007
FAIR USE NOTICE: This item may contain copyrighted (© ) material. Such material is made available to advance understanding of ecological, political, human rights, economic, democracy, scientific, moral, ethical, and social justice issues. This constitutes a ‘fair use’ of any such copyrighted material as provided for in section 107 of the US Copyright Law. In accordance with Title 17 U.S.C. Section 107, this material is distributed for analysis, commentary, educational and intellectual purposes. In some cases comedy and parody have been recognized as fair use.
Creative Commons Attribution-NonCommercial-ShareAlike 3.0 Unported License. For more information please visit:
http://www.law.cornell.edu/uscode/text/17/107
NB: DISCLAIMER: Everything posted on this site conforms to the meaning of the word “alleged” as defined under UK and US Laws and Statutes.
Posted by butlincat at 3:37 pm