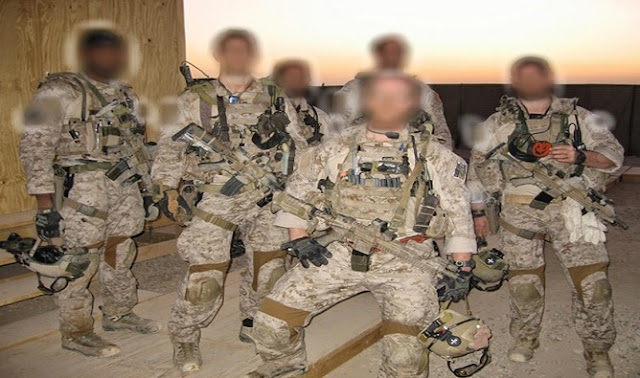 January 11, 2018 visnu priya  0 Comments
Post Views: 7,547
The Execution of SEAL Team Six
by Ann Barnhardt
On May 5th, I had an email conversation with a retired military man with spook contacts. All were in total agreement that the Bin Laden episode was pure theater. The SEALS were sent into a compound as evidenced by the lost chopper on site. But Osama Bin Laden wasn’t in that compound.
Osama Bin Laden has been dead for years. Bin Laden had a genetic condition that caused renal failure (this genetic condition is common among deeply inbred Saudi arab muslims).
Bin Laden had been on dialysis BEFORE 9/11. Dialysis is difficult enough for people in first world countries who can have it done in outstanding facilities. Bin Laden was having it done either in caves or in homes post 9/11.

“Democracy is two wolves deciding what to eat for dinner. Liberty is a well armed lamb contesting the vote.”  – Thomas Jefferson

By Ann Barnhardt, Rense.com;
Michael Savage: Seal Team Six ‘Executed’
Twenty two members of Navy SEAL Team 6 died in Afghanistan shortly after Vice President Joe Biden  leaked that their unit was [allegedly] responsible for the death of Osama Bin Laden. Radio talk show host Michael Savage has no intention of letting anyone forget, telling listeners during his inaugural East Coast drive-time show that he will continue to pursue the truth behind those deaths.

“They were killed. They were assassinated. They were executed. Or it was done because there’s a moron working inside the Defense Department who did it to them,” said Savage. “Either way, somebody should go to prison for this.”

In August 2011 the Taliban shot down a CH-47D Chinook helicopter, killing all 38 passengers on-board. Savage calls it, “one of the greatest military scandals in American history.” He asks:

“How could we lose more men in one mission than in the entire history of the Navy SEALS, and no one has been held accountable for it?”
“Who put them in an old slow-flying helicopter in a combat zone?”
“Why didn’t they break them up into fast-strike helicopters?”
“Who made this decision in the Defense Department?
“Who made it in the Obama administration?”
“These are questions, man, and I want them answered, and I want a hearing; and you want to hear equality, you want to hear fairness? How about fairness to the families whose hearts are broken by somebody in the Obama administration who killed those Navy SEALs? Would that be equality?”

Early this year the House Committee on Oversight and Government Reform will hold a hearing to investigate the tragedy.
Savage has dedicated his book “A Time for War” to Navy SEALs in an effort to “awaken America.”
As those close to the SEALs who were killed come forward, the questions intensify.
One father of a SEAL Team 6 member, Charles Strange, told Savage in an interview that he is convinced that the US government sent his son and the other SEALs to their deaths. Members of the SEAL Team 6 team had given strong indication to their families that they were about to go to their deaths after Vice President Biden revealed that SEAL Team 6 carried out the operation to kill Bin Laden in May 2011.
Strange told Savage that on three different occasions his son grabbed him by the arm, revealing that he had prepared his will. Strange was finally able to put the pieces together.

As Charles Strange recalled, his son Michael said: “Something’s going on with the team. Somebody’s leaking things out. Something’s going on.”
In the interview Savage, reacted and asked: “Your son knew he was being sent to his death?”
“They knew,” replied Strange. “They knew something was up. Every one of them.”

Several other families have reported strangely similar experiences with their sons, according to Strange.
Strange obtained documents related to the crash that show a series of anomalies, including one that shows that the rescue team was held back.

He said, “This was all planned.” “I have it in the paperwork.”

There wasn’t even a chase helicopter or any support for the team Strange told Savage.

“So, you’re saying they planned to execute your son and the others on purpose?” Savage asked.
“One hundred percent, sir,” replied Strange.

Delving into the Crash
Rep. Jason Chaffetz, R-Utah has responded to the concerns of Seal Team 6 family members and said the House Oversight and Government Reform Committee is investigating the crash that took place that fateful day.
President Obama promised Strange that that there would be an investigation into the death of his son. As Strange recalled on August 9, 2011 when the remains of 30 US troops were brought home to Dover Air Force Base from Afghanistan he whispered into Obama’s ear, asking if a congressional investigation would be launched into his son’s death.

“We will look very, very, very deep into this,” replied Obama.

But Strange has not heard a word since that encounter with Obama.
Families of the SEAL Team 6 members who were killed have filed a lawsuit against President Obama and Vice President Joe Biden as well as the Taliban, the governments of Afghanistan and Iran as $10,000 is paid for every dead US service member by the Islamic regime.
The families have their suspicions about the mission and among them is the sudden replacement of the seven Afghan commandos on board the helicopter just prior to it taking off. The seven who died aboard the Chinook helicopter are not the same seven listed in the flight’s manifest. To this day the families still do not know the true identities of the Afghans who died.
According to Strange the black box was never recovered from the chopper either and does not believe it the explanation that is washed away in a flash flood.

One of the world's most dreaded terrorists, Osama bin Laden, was finally killed by American forces on Sunday. And that too, by a handful of brave men from the US Special Forces - the Navy SEALs. They came in choppers, armed with the latest ammunition, broke through the ceiling of Osama's palatial mansion and shot dead the world's top most terrorist. In about 40 minutes, the SEAL team accomplished what the whole world has been trying to achieve for over a decade - kill Osama bin Laden.Here's a look at the Navy SEAL 6 - the team that got Osama. 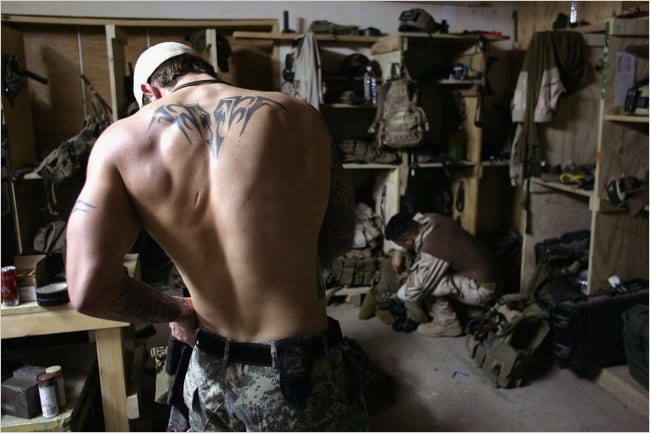 One of the world's most dreaded terrorists, Osama bin Laden, was finally killed by American forces on Sunday. And that too, by a handful of brave men from the US Special Forces - the Navy SEALs. They came in choppers, armed with the latest ammunition, broke through the ceiling of Osama's palatial mansion and shot dead the world's top most terrorist. In about 40 minutes, the SEAL team accomplished what the whole world has been trying to achieve for over a decade - kill Osama bin Laden.The identities of the about two dozen men who carried out the covert operation will never be known to the public. The men of the elite Navy SEAL 6 are responsible for counter-terrorist operations and who they are and what they do is classified. But here's a look at the team they belong to - Navy SEALs, the men that got Osama. 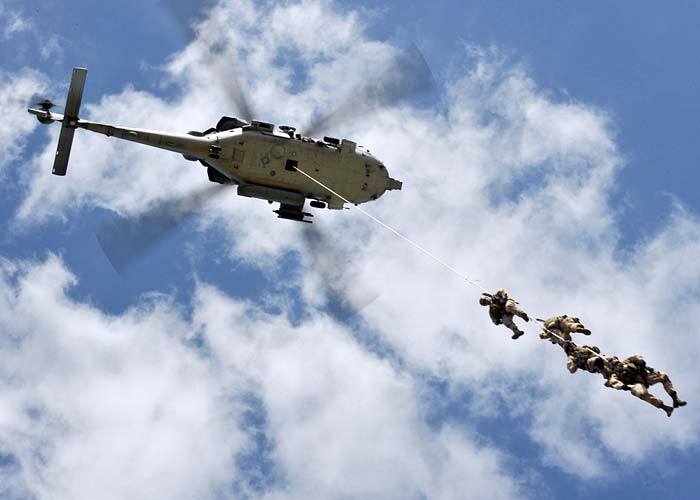 Made up of only a few hundred forces based in Dam Neck, Virginia, the elite SEAL unit officially known as Naval Special Warfare Development Group, or "DEVGRU," is part of a special operations brotherhood that calls itself "the quiet professionals." (Text: AP) 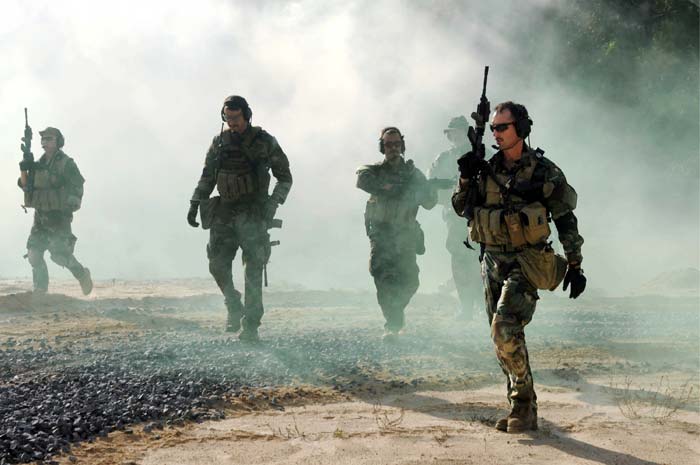 SEAL Team 6 raided targets outside war zones like Yemen and Somalia in the past three years, though the bulk of the unit's current missions are in Afghanistan. (Text: AP) 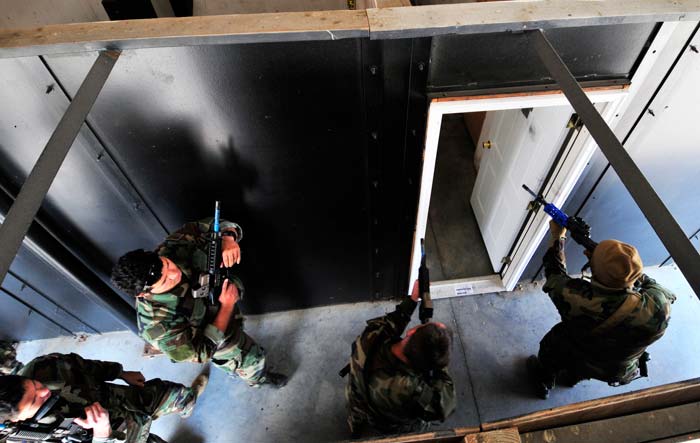 The unit is overseen by the Joint Special Operations Command (JSOC), which oversees the US Army's Delta Force and other special units. JSOC's combined forces have been responsible for a quadrupling of counterterrorism raids that have targeted militants in record numbers over the past year in Afghanistan. Some 4,500 elite special operations forces and support units have been part of the surge of US forces there. (Text: AP) SEAL Team 6 actually works so often with the intelligence agency that it's sometimes called the CIA's Pretorian Guard - a partnership that started in Iraq, as an outgrowth of the fusion of special operations forces and intelligence in the hunt for militants there. (Text: AP) SEALs and Delta both, commanded by then-JSOC chief General Stanley McChrystal, learned to work much like FBI agents, first attacking a target, killing or capturing the suspects, and then gathering evidence at the scene. (Text: AP) 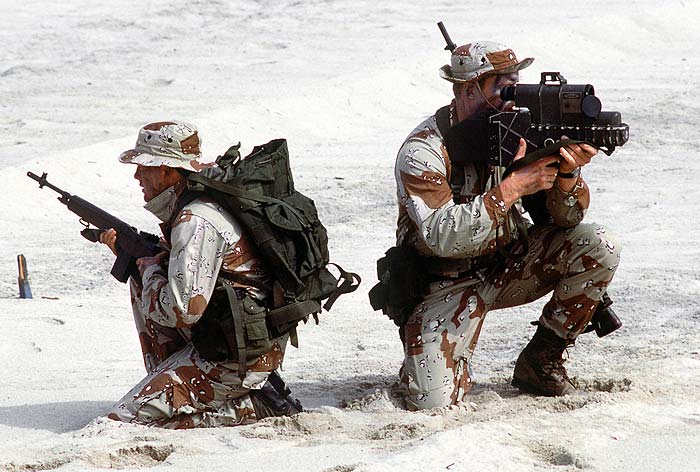 The battlegrounds of Iraq and Afghanistan had been informally divided, with the SEALs running Afghanistan and the US Army's Delta Force conducting the bulk of the operations in Iraq, though there was overlap of each organization. There is considerable professional rivalry between them. (Text: AP. Picture courtesy: US Navy SEAL-SWCC official website) 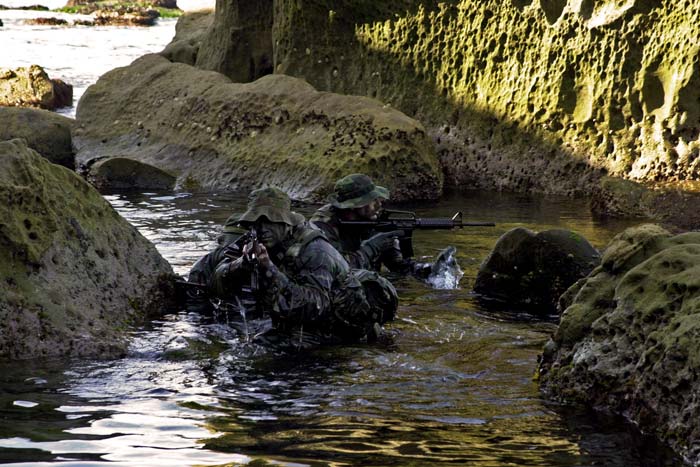 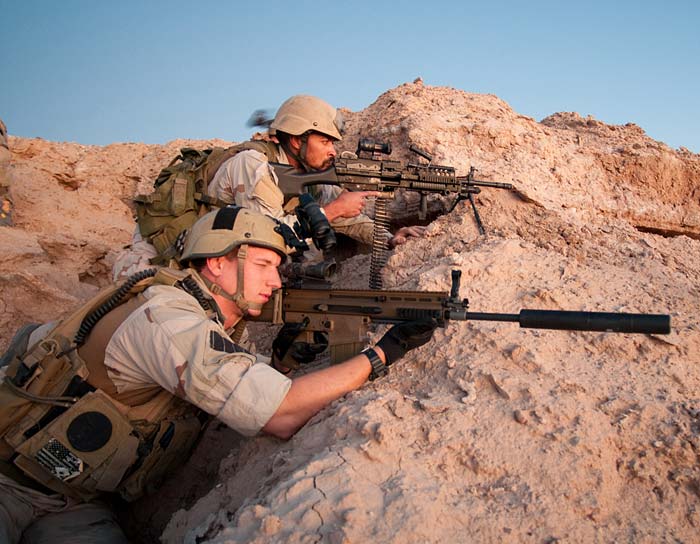 The last time the public was made aware of a SEAL raid on Pakistani soil was 2008, when the raiders flew only a mile over the border to the town of Angurada, according to Pakistani officials, speaking on condition of anonymity to discuss sensitive strategic matters. The high-value targets the Americans had been told were there had fled, and those left behind in the compound fought back, resulting in a number of civilian casualties, US and Pakistani officials say, speaking on condition of anonymity to discuss a classified operation. (Text: AP. Picture courtesy: US Navy SEAL-SWCC official website) 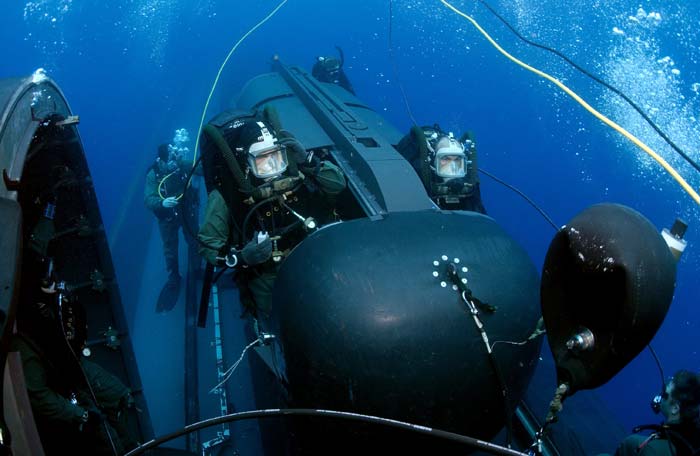 The successful bin Laden mission is a much-needed boost for the unit. The SEALs' reputation took a hit within the special operations community after a 2010 rescue mission led to the accidental killing of British hostage Linda Norgrove, held by militants in Afghanistan. One of the SEALs threw a fragmentation grenade at a militant when the team stormed their hideout, not realizing Norgrove was curled on the ground next to the militant, and then lied about throwing the grenade. (Text: AP. Picture courtesy: US Navy SEAL-SWCC official website) 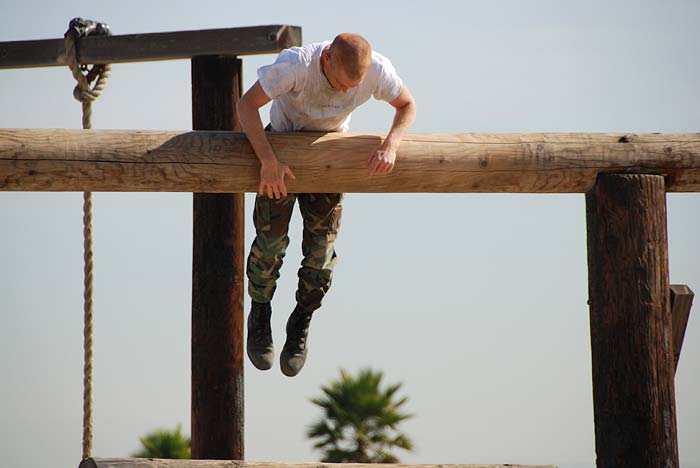 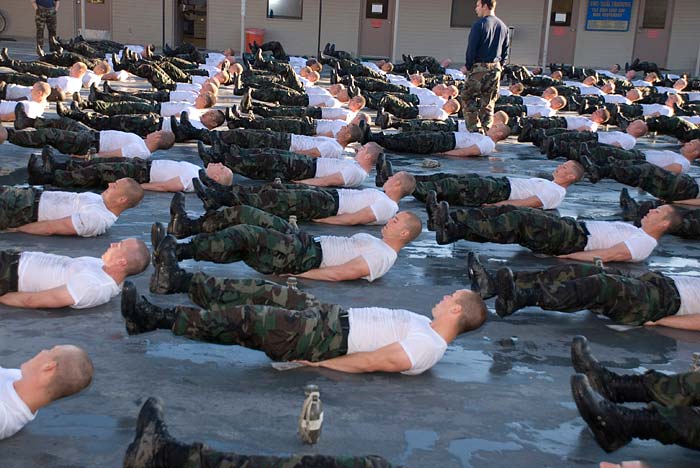 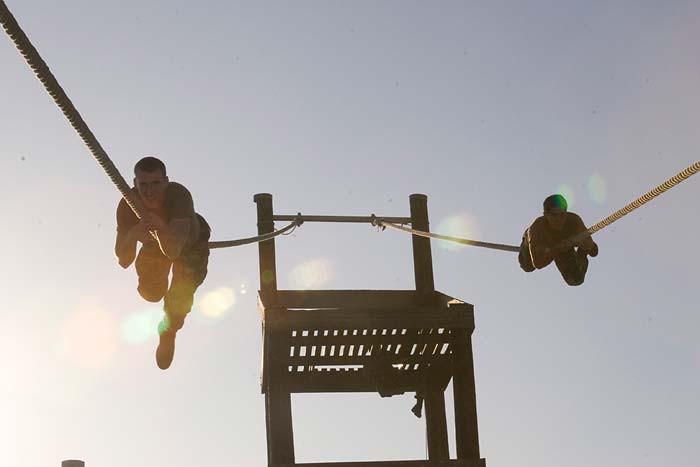 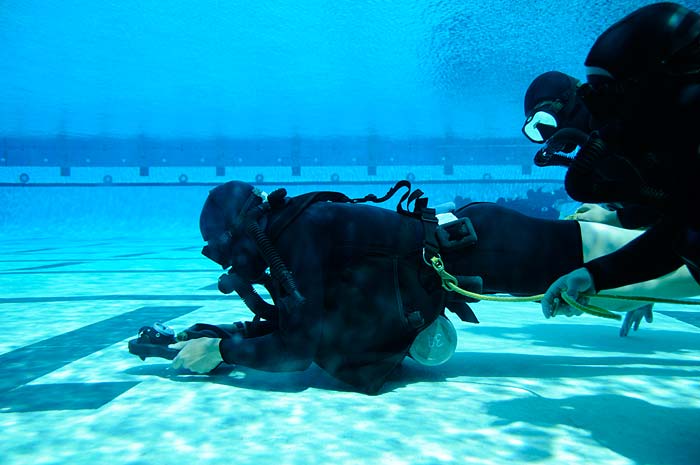 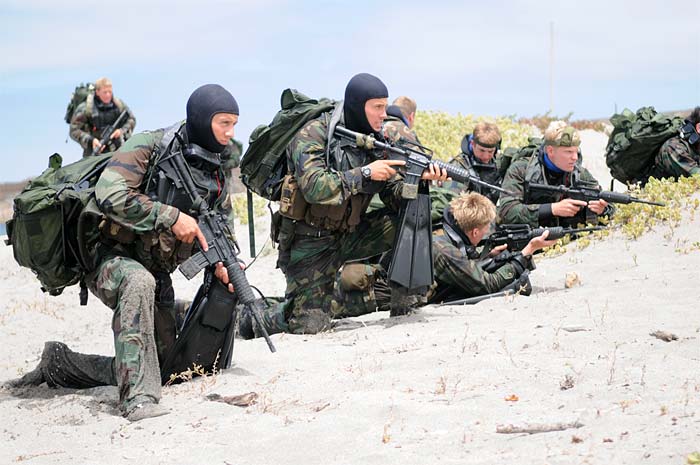