The results of a clinical trial of the drug larotrectinib, which had a 75 percent success rate in a previous clinical trial with adults, have been called "unprecedented" by researchers.
By Allen Cone  |  March 30, 2018 at 1:52 PM

The drug larotrectinib was effective in 93 percent of pediatric patients tested in a Phase 1 clincial trial, according to researchers at the University of Texas Southwestern. Photo by Bill Branson/National Cancer Institute
March 30 (UPI) -- A new cancer drug called larotrectinib was effective in 93 percent of pediatric patients tested in a Phase 1 clincial trial, researchers announced.
Researchers at University of Texas' Southwestern's Simmons Cancer Center in Dallas tested larotrectinib, which targets a fused gene called TRK found in many types of cancer in a clinical trial. The findings were published Thursdayin The Lancet.
Larotrectinib is the first cancer drug to receive Food and Drug Administration breakthrough therapy designation for patients with a specific fusion of two genes in the cancer cell regardless of the type of cancer.
"In some cancers, a part of the TRK gene has become attached to another gene, which is called a fusion," Dr. Ted Laetsch, an assistant Professor of Pediatrics at UT Southwestern and lead author of the study, said in a press release. "When this occurs, it leads to the TRK gene being turned on when it's not supposed to be and that causes the cells to grow uncontrollably. What's unique about the drug is it is very selective; it only blocks TRK receptors."
These TRK fusions occur in a few common adult cancers, but they appear frequently in rare pediatric cancers, including infantile fibrosarcoma, cellular congenital mesoblastic nephroma and papillary thyroid cancer.
Larotrectinib, being developed by Loxo Oncology Inc., is part of class of molecules known as kinase inhibitors, which cut back on the enzymatic activity of a key cellular reaction.
The Phase 1/2 trials began in December 2015 and are scheduled to be complete in December 2019 with 92 participants.
"Every patient with a TRK fusion-positive solid tumor treated on this study had their tumor shrink," Laetsch said. "The nearly universal response rate seen with larotrectinib is unprecedented."
The study was conducted at eight sites in the United States between Dec. 21, 2015, and April 13, 2017, among 24 participants ranging in age from 1 month to 21 years old. Seventeen had the TRK fusions and seven did not.
All but one of the patients with TRK achieved an "objective response," according to the researchers. The one exception had tumor regression that did not meet the criteria for objective response.
The response to the drug has continued in the long term for most patients, researchers said.
"For some of the targeted drugs in the past, many patients responded initially, but then resistance developed quickly. To date, the response to this drug seems to be durable in most patients," Laetsch said.
One patient, 13-year-old Briana Ayala of El Paso, Texas, underwent surgery two years ago at Children Health in Dallas to remove a tumor and portions of the aorta wrapped around it. The cancer returned and no further treatment was available.
But she was a genetic match for the drug trial and after orally taking the drug twice a day, the tumor had shrunk and pain subsided.
Ayala and none of the other participants quit the study because of a drug-induced side effects. Other cancer treatments are usually associated with side effects.
Larotrectinib also had a 75 percent effective response rate among adults in a separate trial. The results were published in the New England Journal of Medicine.
Future trials are being planned for a similar drug for patients who developed resistance during the trials.
Related UPI Stories
Topics: Food and Drug Administration

The 2 Best Cancer Treatments of All? (video)

In a hurry? Click here to read the Article Summary...

Video Transcript: The 2 Best Cancer Treatments of All?

Ty Bollinger: One of the things, Dr. Contreras, that you mentioned was laughter and music. It’s so ironic… the reason I’m able to interview you today is because of Dr. Patrick Quillin. He spoke to you earlier today and said, “You should go interview with Ty.”
Dr. Quillin, in “The Quest for the Cures” [docu-series] back in the spring, he mentioned two important facets of any cancer treatment are music and laughter.
Dr. Francisco Contreras: They are the most potent immunostimulating agents available. There’s no drug; there’s no vaccine that’s more potent to stimulate the immune system. There is a very interesting study that shows that for every minute of anger you will depress significantly and measurably, of course, the quality and quantity of your immune system.
One minute of anger is six hours of depression. One minute of laughter will boost significantly your immune system for 24 hours. That’s why children up to the age of five laugh around 400 times a day. Adults only about 40. The reason why children can eat dirt and be dirty all the time is because they’re laughing.
Ty Bollinger: Laughter is the best medicine.
Dr. Francisco Contreras: And so they’re protected.
At the Oasis of Hope we have laughter sessions every day. Every time we get together with them [cancer patients], no matter how serious the thing is, we try to put in several jokes for them. They don’t have to be good. We laugh. Sometimes we laugh at the people telling the joke − not because of the joke.
Ty Bollinger: Sometimes you laugh at how bad the jokes were. 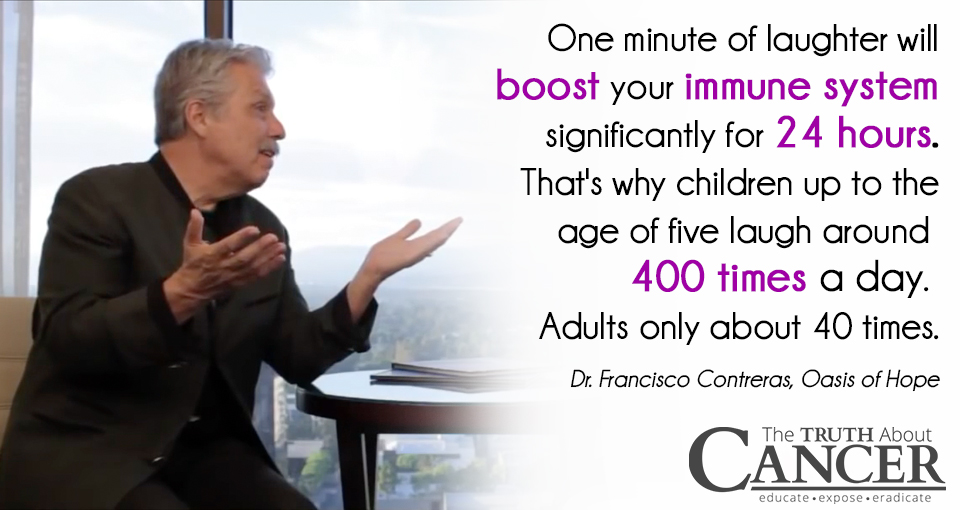 Dr. Francisco Contreras: Exactly. It’s amazing how powerful things that cost nothing are. Meditation, colors… there are studies that show that the most immune-depressing colors are white and blue. The typical hospital colors, imagine that. We painted all our walls in mauve because there are studies that show it’s the most immune lifting color. We take into account all of those things… those little things sometimes count for a lot.
Ty Bollinger: Sure. The thing that strikes me about that, Dr. Contreras, is the difference between that approach and the traditional cancer approach today where you’re diagnosed, the doctor says…”You’re dead in three months.”
There’s no hope. There’s no joy. There’s no laughter. There’s nothing. What you just said about the fact that laughter stimulates the immune system and anger depresses it… what about the feeling of despair?

If Cancer Scares You, Do Not Miss This...

See the Truth About Cancer® here.
Over 20,000 people die each day from cancer. So if it scares you, that’s understandable.
However… whether you’re trying to avoid cancer or beat it if you’ve got it, there is one very powerful antidote to the fear, and to the disease itself: knowledge.
In “The Truth About Cancer: A Global Quest” you’ll discover the most powerful ways to prevent, treat, heal from, and beat the disease. Though you haven’t heard of most of these ways, you deserve to, so…
Click here now to conquer the fear, and find out what you really need to know.
source: https://thetruthaboutcancer.com/two-best-cancer-treatments-video/
Posted by butlincat at 4:33 am