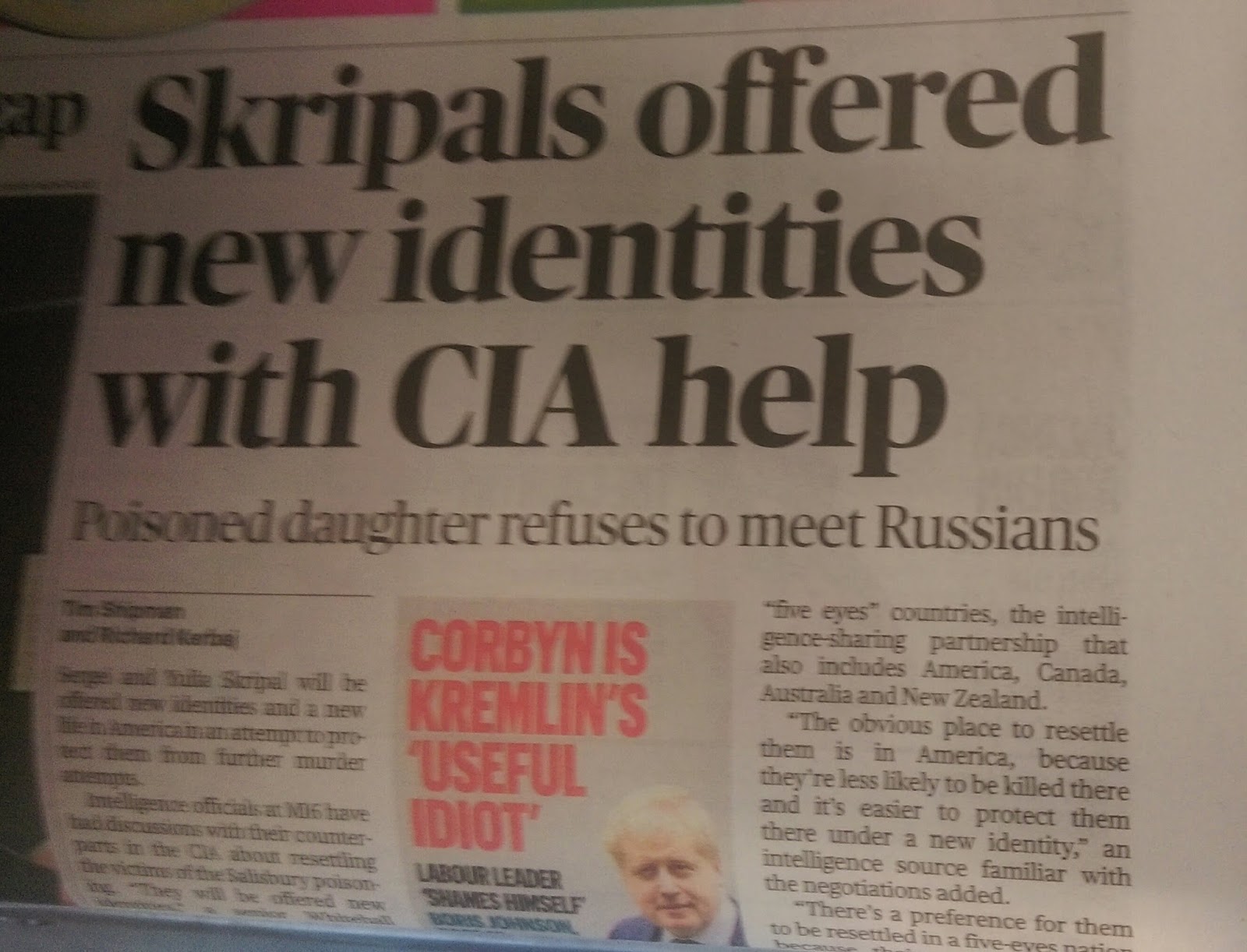 Tim Shipman and Richard Kerbaj
April 8 2018, 12:01am, The Sunday Times
Sergei and Yulia Skripal will be offered new identities and a new life in America in an attempt to protect them from further murder attempts.
Intelligence officials at MI6 have had discussions with their counterparts in the CIA about resettling the victims of the Salisbury poisoning. “They will be offered new identities,” a senior Whitehall figure said.
Senior sources revealed both victims were conscious and would soon begin helping investigators with their inquiries into the nerve agent attack on March 4. Yulia, 33, a Russian citizen, has rejected demands by the Russian embassy in London that it provides her and her father with consular support — a move that has convinced British officials she might move to the West permanently.
The details emerged as Boris Johnson launched a blistering attack on Jeremy Corbyn, accusing him of being “the Kremlin’s useful idiot” for refusing to blame Russia for the poison plot.
The foreign secretary said the Labour leader was playing “Putin’s game” by refusing to say “unequivocally . . . that the Russian state was responsible”.
In an article for The Sunday Times, Johnson accuses the Kremlin of peddling “an avalanche of lies and disinformation” about the attack and says Corbyn is endorsing this “torrent of absurdity”. He writes: “There is only one thing that gives the Kremlin succou­r and lends false credibility to its propaganda onslaught. That is when politi­cians from the targeted countries join in. Sadly, I am driven to the conclusion that Jeremy Corbyn has joined this effort.”
The foreign secretary said Corbyn came from an “infantile leftist background” that led him to sympathise with “any country, any movement, however unappealing, that is hostile to Britain”. He concludes: “Corbyn shames himself by lending it succour. Truly he is the Kremlin’s useful idiot.”
While Sergei Skripal, 66, is awake, his recovery is “further behind” that of his daughter, but one source said ministers “hope they can both assist us with what happened soon”. Despite their recovery, senior officials said life for the Skripals “would likely never be the same again” and that they could have injuries that would “require ongoing medical care”.
Security sources said Britain would want to ensure their safety by relocating them with one of the “five eyes” countries, the intelligence-sharing partnership that also includes America, Canada, Australia and New Zealand.
“The obvious place to resettle them is in America, because they’re less likely to be killed there and it’s easier to protect them there under a new identity,” an intelligence source familiar with the negotiations added.
“There’s a preference for them to be resettled in a five-eyes nation because their case would have huge security implications.”
Senior figures in Downing Street are seeking to persuade the national security adviser, Mark Sedwill, and Britain’s spy chiefs to reveal more of the intelligence that convinced Britain’s allies that the novichok nerve agent used in the attack came from Russia.
In his article, Johnson lays out the case against Russia, which minister­s hope will receive a boost — perhaps as early as Wednesday — from the Organisation for the Prohib­ition of Chemical Weapons in the Hague, which is expected to confirm that the nerve agent was novichok.
The chemical weapons expert Hamis­h de Bretton-Gordon, who has been briefed on “some of the intelligence”, called on the government to “reveal a little more of the evidence”.
De Bretton-Gordon said he was “100% confident” that Russia was responsible: “I am absolutely clear that the Russians are guilty of this and the UN security council should take them to task for it.”
Intelligence sources have cast doubt on claims that Britain has emasculated Russia’s spy network in the West despite having more than 150 of its diplomats expelled from 28 countries, including 23 from the UK.
The Kremlin has spies in the UK, unconnected to the Russian embassy, who have continued to carry out intelligence-collecting operations.
“Russia’s illegals programme specialises in running agents who have nothing to do with the embassy in London,” another intelligence source said. “So the Kremlin would not just be relying on diplomatic cover for its intelligence collection.”
Russia’s ambassador to the UK sought to muddy the waters further yesterday by demanding a meeting with Johnson. The foreign secretary accused Moscow of a “diversionary tactic”.
Johnson has been under pressure since Gary Aitkenhead, the chief executive of the defence research laboratory at Porton Down, said last week that his scientists had not confirmed precisely where the novichok was made — an interview authorised by the Ministry of Defence.
That led to an ambiguous interview the foreign secretary gave to German television being exhumed. In it, Johnson claimed scientists at Porton Down had been “absolutely categorical” in telling him there was “no doubt” about the origin of the nerve agent.
Critics said he had wrongly claimed that Porton Down had blamed Russia. Johnson’s allies argue that he was saying Porton Down had no doubt the substance was novichok.
The Sunday Times understands that security officials around Sedwill have now “seized control” of the media response to the attacks.
A Labour spokesman said: “Jeremy Corbyn has repeatedly said the evidence points to Russia being responsible, directly or indirectly, and that the Russian authorities must be held to account on the basis of evidence. Boris Johnson has made a fool of himself. These ridiculous insults won’t distract attention from the fact that he has clearly misled the public over vital issues of national security.”
source: https://www.thetimes.co.uk/edition/news/sergei-and-yulia-skripal-offered-new-identities-with-cia-help-ztf896rnj


THE POLICE WITNESS PROTECTION PROGRAMME IS A SHAM

FAIR USE NOTICE: This item may contain copyrighted (© ) material. Such material is made available to advance understanding of ecological, political, human rights, economic, democracy, scientific, moral, ethical, and social justice issues. This constitutes a 'fair use' of any such copyrighted material as provided for in section 107 of the US Copyright Law. In accordance with Title 17 U.S.C. Section 107, this material is distributed for analysis, commentary, educational and intellectual purposes. In some cases comedy and parody have been recognized as fair use.
Creative Commons Attribution-NonCommercial-ShareAlike 3.0 Unported License. For more information please visit:
http://www.law.cornell.edu/uscode/text/17/107

NB: Everything posted on this site conforms to the meaning of the word “alleged” as defined under UK and US Laws and Statutes.
Posted by butlincat at 2:45 pm