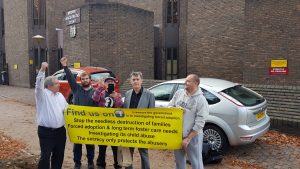 e outside Chatham Magistrates Court. But his fight to have Medway return his son continues.
A father trying to have his son released from Medway Social Services has walked free from court after being charged following a rooftop protest last year.

Eugene Lukjanenko wanted to make people aware of the way in which social services have treated his son. Social workers took ‘J’ for alleged and unspecified ‘emotional abuse’.
This catch-all clause is more prevalent in Medway than elsewhere. as we have previously reported. ‘J’ is now fifteen and should be released next year in any case. However, Medway have told Mr Lukjanenko they want to cling on to him until he is eighteen.
In actual fact, the son could walk out of foster care tomorrow and return to his father and Medway could do nothing about it. Children have done that. But we all have different gifts and temperaments. Furthermore, the time a child spends in the ‘care’ of a local authority gives social workers ample time to brainwash him. In J’s case this has not been totally successful. On his father’s birthday last year he sent his dad a concealed note. It read: ‘I know things are difficult for you and for me, but please don’t give up.’
Moreover, we now understand Medway social workers have told J not to give his father his mobile number or email address. On top of that, they have told him if he contacts his father without their permission he will never see him again. That may be an empty threat, but it is sadly typical of Medway’s behaviour and indeed of the whole child care system.

So it was that on Thursday last week (11th October 2018) Eugene Lukjanenko appeared before Medway Magistrates. On 5th September 2018 he climbed the porch roof of the council building in Chatham.The council wanted to prosecute My Lukjanenko for the disruption he caused. They also sought a restraining order to prevent him visiting any Medway Council building without prior written authorisation.
Several of his supporters came to the court to show their solidarity. They remained at the court throughout the day to see how the case would proceed.
From the start of the day there was much legal wrangling. Medway Council were unsure how to proceed with the case. Initially they wanted to prosecute and send Mr Lukjanenko to prison. This would not be for the first time. He was previously imprisoned for refusing to observe a family court injunction.

A Family Court Judge imposed this to prevent him talking about his case in public. After repeatedly breaching the injunction on social media, Judge Richard Scarratt decided not to tolerate this any longer. He gave Mr Lukjanenko two suspended sentences.
Mr Lukjanenko continued to use social media to bring Medway’s treatment of his son to public attention. Finally, Judge Scarratt sentenced Mr Lukjanenko to eight months in prison.During his time in HMP Elmley, Mr Lukjanenko went on hunger strike in protest. The result of this was a deal with Medway. They agreed to increase his contact with ‘J’ from four times to twelve times a year. Prison officers were highly supportive of Mr Lukjanenko during this time. They found it unusual to have someone in their cells who had committed no crime.
At Medway Magistrates Court, Mr Lukjanenko said if they wanted to send him to prison again, he would happily go. He says he has faced at the hands of Medway Council. Furthermore, this was in stark contrast with the way he was compassionately treated in prison.

After almost three hours of discussion behind closed doors, Mr Lukjanenko’s barrister came back with an offer from Medway: The council would offer no evidence and not proceed with the prosecution. In return they wanted the defendant to agree to a restraining order. This would have prevented him from visiting any of four Medway Council buildings without prior written approval. If he did not agree, they would proceed with the prosecution. Mr Lukjanenko tore up the paper with the list of council addresses. He flatly refused to sign anything preventing him from visiting the council buildings.
The legal wrangling continued between Mr Lukjanenko, his barrister and the barrister working for Medway Council. The case dragged long into the afternoon. Still at this point no one had actually been in the court room. Th hearing was originally scheduled for 10am.
My Lukjanenko decided he was prepared to agree to sign the restraining order for just one of the buildings. This was the one he had done his rooftop protest on. However, he absolutely refused to agree to not being allowed near the other three council buildings. The council were not happy with this and refused to change their position. Mr Lukjanenko was to sign the restraining order agreeing not to approach any of the four buildings, or they would proceed with the prosecution.

Then, in a sudden change of heart, the council agreed to offer no evidence. Instead they would press for a hearing on the restraining order alone. They wanted their barrister to show in court why Mr Lukjanenko should be barred from all four council buildings.
Mr Lukjanenko decided he wanted to defend himself against the council in the hearing on the restraining order. However, to give a proper defence he would need to name the social workers involved in his case. The trouble was, a previously issued family court injunction specifically prohibited this. If he mentioned the names of social workers Ann Domeney and Ian Sutherland in court, he would be in breach of this injunction.
His legal team contacted the family court judge who had issued this injunction to ask if he would temporarily lift it for this case. This would allow him to give a proper defence. The family court judge was resolute in saying no. Judge Scarratt said under no circumstances was his injunction to be lifted.

With the injunction not being lifted and Mr Lukjanenko unable to give a proper defence, his barrister told his opposite number he would argue in court this would result in an unfair trial. Finally, after almost six hours, everyone was called into the court room. The council offered no evidence for the original prosecution. Dramatically, at the last minute they instructed their legal team not to proceed with the restraining order.
Mr Lukjanenko was free to go! Hours of wrangling, threats and blackmail were ultimately defeated by Mr Lukjanenko’s refusal to bow to the whims of the council. He is now able to continue his campaign to try and get his son back. There is no doubt he will end up in court again in the future, but in this case, justice was done.
Pray for Eugene Lukjanenko and his son ‘J’. The word of God says:
Malachi 4:5 Behold, I will send you Elijah the prophet before the coming of the great and dreadful day of the LORD:Mal 4:6 And he shall turn the heart of the fathers to the children, and the heart of the children to their fathers, lest I come and smite the earth with a curse.
Read our previous articles:
Father in care case faces protest charge
Medway Council’s Emotional Abuse
Medway Council took children because home ‘untidy’
Judge finds father in contempt of court again

“DRY STRIKE ENDED 2ND OF MARCH
Today 6th of March I hear that Eugene Lukjanenko stopped his second dry strike on or after day 5 and that was last Friday 2nd of March. Sorry I did not know earlier, I would have posted if I knew. He is now preparing for appeal hearing 14th RCJ“

from EL’s FB 01 Feb. 2018 = “Eugene Lukjanenko is back on his hunger strike. Today is his 70th day. His trip to the hospital yesterday had something to do with an old ailment. I have been told that he is quite well otherwise. Thank you to all who prayed for him. A pastor was allowed to spend time with him. I know he has been reading his Bible, the Psalms in particular. All of us who have been following Eugene’s situation are relieved to know that he is ok for now. Will justice be done in this life for Eugene and his son? Only God knows.”
https://www.facebook.com/eugene.lukjanenko

Eugene Lukjanenko targeted home of former Government minister Edward Timpson
By
Andrew Cain
A protester stood on a former MP’s roof for around 57 hours to get his son out of foster care, a court heard.
Eugene Lukjanenko, 60, of Kent, staged the protest atop the roof of the home of former Crewe and and Nantwich MP and Children and Families Minister Edward Timpson in May 2017.
The defendant pleaded not guilty to one charge of harassing Mr Timpson at his home, and also denied a further charge that he refused to leave the property after he was given an order to do so by police.
During Lukjanenko’s trial at Chester Magistrates Court, prosecutor Kate Marchuk told the magistrates that the defendant and another man had used ladders to climb onto a flat roof at the front of Mr Timpson’s Tarporley home, while other protesters against “forced adoption” protested in the MPs driveway.

He first ascended to the roof on Saturday, May 6, and did not come down again until the evening of Monday, May 9.

FAIR USE NOTICE: This item may contain copyrighted (© ) material. Such material is made available to advance understanding of ecological, political, human rights, economic, democracy, scientific, moral, ethical, and social justice issues. This constitutes a ‘fair use’ of any such copyrighted material as provided for in section 107 of the US Copyright Law. In accordance with Title 17 U.S.C. Section 107, this material is distributed for analysis, commentary, educational and intellectual purposes. In some cases comedy and parody have been recognized as fair use.
Creative Commons Attribution-NonCommercial-ShareAlike 3.0 Unported License. For more information please visit:
http://www.law.cornell.edu/uscode/text/17/107
NB: DISCLAIMER: Everything posted on this site conforms to the meaning of the word “alleged” as defined under UK and US Laws and Statutes.

Posted by butlincat at 5:08 am