The last suspect in the Hatton Garden heist has been found guilty of conspiracy to burgle.
Michael Seed, 58, from Islington, nick-named "Basil", played a key role in the £14m safe deposit raid in 2015.
Seed, an alarm specialist who denied the charges, was also found guilty of conspiring to hide the proceeds.
He was jailed for 10 years for the burglary and eight years for the second charge, with the terms to run concurrently.
Jurors at Woolwich Crown Court had been deliberating for more than a week and returned a majority verdict earlier of 10-2 on the first charge.
The convictions come four years after the infamous heist.

Seed is believed to have let himself in to the building in London's diamond district using a set of keys.
He was one of two men who climbed into the vault to loot 73 safe deposit boxes after the gang of ageing criminals drilled through the thick concrete wall during the 2015 Easter bank holiday weekend.
Seed, who pays no taxes, claims no benefits and rarely uses a bank account, evaded capture for three years.
Police raided his flat, in Islington, north London, located about two miles away from Hatton Garden, on 27 March last year.
The electronics expert told a jury at Woolwich Crown Court he was not the man nicknamed "Basil" by the rest of the gang.
But jurors returned a unanimous guilty verdict for the second charge of conspiracy to handle the proceeds after £143,000 worth of gold ingots, gems and jewellery was found in his bedroom.
Seed is believed to have been melting down gold and breaking up jewellery on his bedroom workbench.

He was cleared of conspiracy to burgle the high-end Chatila jewellery store in Bond Street over the late August bank holiday weekend in 2010 with members of the same gang.
Prosecutors had alleged he posed as a BT engineer to tamper with the security system before the burglary, then used a 2G mobile phone jammer to block the alarm signal.
On that occasion, thieves failed to drill into a safe containing £40 million worth of gems but made off with £1 million worth of jewellery from the shop's display cabinets.
The jury of six men and six women deliberated for 35 hours and 35 minutes before returning their verdicts.
Seed previously told the court he could have been on a family holiday in Cornwall or visiting his elderly mother, in Cambridge, at the time of the Hatton Garden burglary and told jurors he had never been known as Basil.

His fellow Hatton Garden raiders Brian Reader, 80, John "Kenny" Collins, 78, Daniel Jones, 64, and Terry Perkins, who died in prison last year aged 69, were all jailed in 2016.
Collins and Reader are already out of prison but face going back to jail if they fail to pay back more than £6.5m of the proceeds police believe could still be under their control.
Detectives believe the gang could have been operating undetected for decades before they were caught, but cannot link them to any other crimes.

Who is Michael Seed?


The son of a university professor, Seed gained A-levels in physics, chemistry, maths and geology at a secondary modern school outside Cambridge.
He then worked in an electronics factory making parts for submarine detectors.
"I have always had an interest in electronics", Seed told jurors. "It was a passion of mine."
He went on to study physics and electronics at Nottingham University, where he "enjoyed recreational drugs" and "used to take LSD every weekend" before his one previous run-in with the law.
In 1984, aged 24, Seed was handed a three-year prison sentence for supplying controlled drugs of Class A and Class B after selling 10 LSD tablets and some cannabis to a friend.
He was released after serving 21 months and moved into the one-bedroom council flat in Islington where he lived up until his arrest.
source:  https://www.bbc.co.uk/news/uk-england-london-47584477

FOUR men have admitted to conspiracy to burgle over the £10million Hatton Garden safety deposit raid. 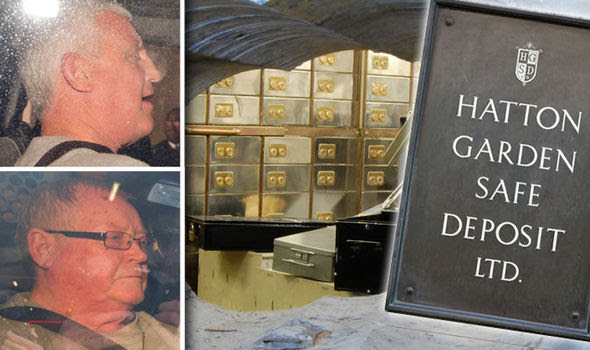 PA•GETTY
Hatton Garden was raided over the Easter bank holiday weekend
.
John Collins, Daniel Jones, Terry Perkins and Brian Reader pleaded guilty at Woolwich Crown Court today.
Dubbed Dad's Army, nine suspects aged between 42 and 76, have been charged with conspiracy to burgle and launder proceeds from the heist at Hatton Garden Safe Deposit in London’s Hatton Garden over the Easter Weekend in April.
Among the suspects are Terry Perkins, 67, of Heene Road, Daniel Jones, 58, of Park Avenue, and Hugh Doyle, 48, of Riverside Gardens, all from Enfield, north London; William Lincoln, 60, of Winkley Street, Bethnal Green, east London, and John Collins, 74, of Blestoe Walk, Islington, north London.
Brian Reader, 76, and Paul Reader, 50, both of Dartford Road, Dartford, Kent; Carl Wood, 58, of Elderbeck Close, Cheshunt, Hertfordshire, and taxi driver John Harbinson, 42, of Beresford Gardens in Benfleet, Essex, also face the same charge.
The men are also accused of conspiracy to conceal, disguise, convert or transfer a quantity of jewellery and other items between April 1 and May 19.

Also in court are four other people separately accused of conspiracy to conceal, disguise, convert, transfer or remove criminal property.
Brenn Walters, also known as Ben Perkins, 43, and Laura Perkins, 40, both of Manor Court, Enfield, north London, and Terri Robinson, 35, and Steven Robinson, 46, both of Sterling Road, Enfield, were charged in connection with the raid last month.
The attack over the Easter weekend saw thieves break into the vault at Hatton Garden Safe Deposit, after using a drill to bore a hole 20in deep, 10in high and 18in into the vault wall.
It is claimed the gang broke into a lift shaft to get to the basement, where they used an angle grinder and crowbar to force through shutter doors.
Officers believe they got into the building, which houses a number of businesses, through a communal entrance before disabling the lift so they could climb down the shaft to the basement.
They then used a diamond tipped drill to cut through the 20 inched reinforced concrete wall to the vault and ransacked 73 safety deposit boxes, taking items worth millions of pounds, before escaping in a waiting van.
After facing criticism for the way the incident was handled, the Metropolitan Police apologised for not following procedures when receiving a call from a security firm about an intruder alert at the premises at midnight on Good Friday [lmao!...ed.]. 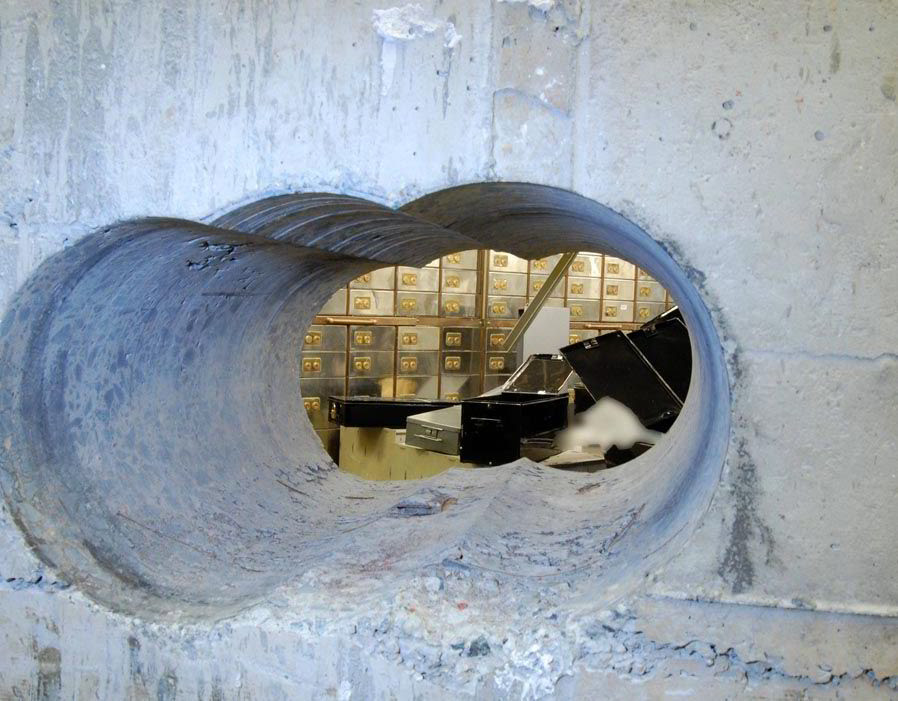 Related articles
source:  http://www.express.co.uk/news/uk/602942/Hatton-Garden-jewellery-raid-suspects-court
Posted by butlincat at 2:23 am