UPDATED: "SO15 COUNTER TERRORISM COMMAND" + BREAKING: Britain First's Paul Golding arrested on arriving back in the UK from Moscow

Email newsletter reproduced in the interests of truth and justice

www.britainfirst.org
This is a quick update on what happened to Paul, Ashlea and Tim at the hands of 'SO15 Counter Terrorism Command'.

Paul is today consulting with an expert on anti-terrorism legislation.

This expert is going to legally represent Paul from now on if this saga results in criminal charges being laid on him by SO15. 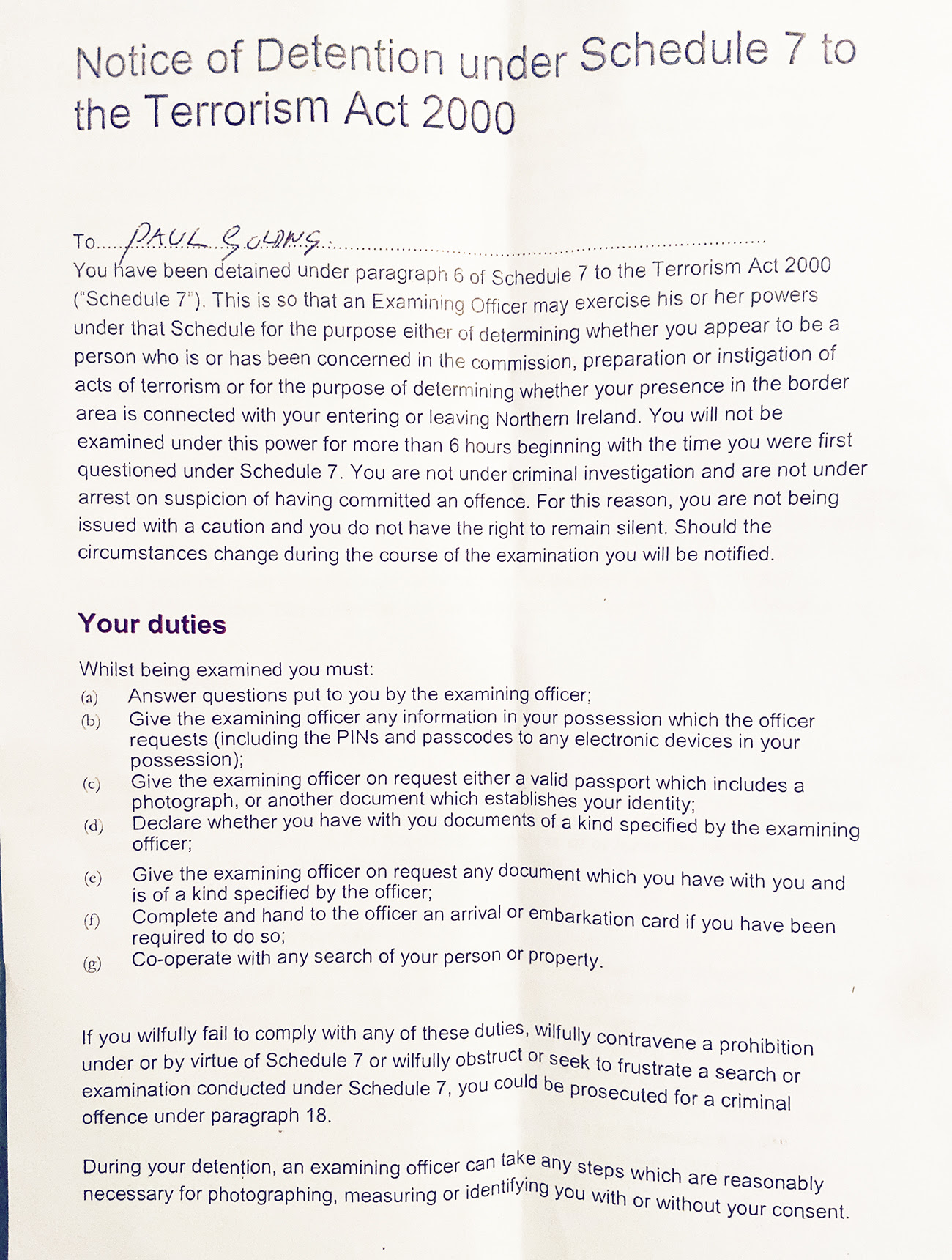 More on that shortly, as Paul is going to provide a video update over the weekend.

What we urgently need help with, however, is to re-purchase the laptops and phones that were seized by SO15.

That means our administration and every other function of our HQ has ground to a halt. 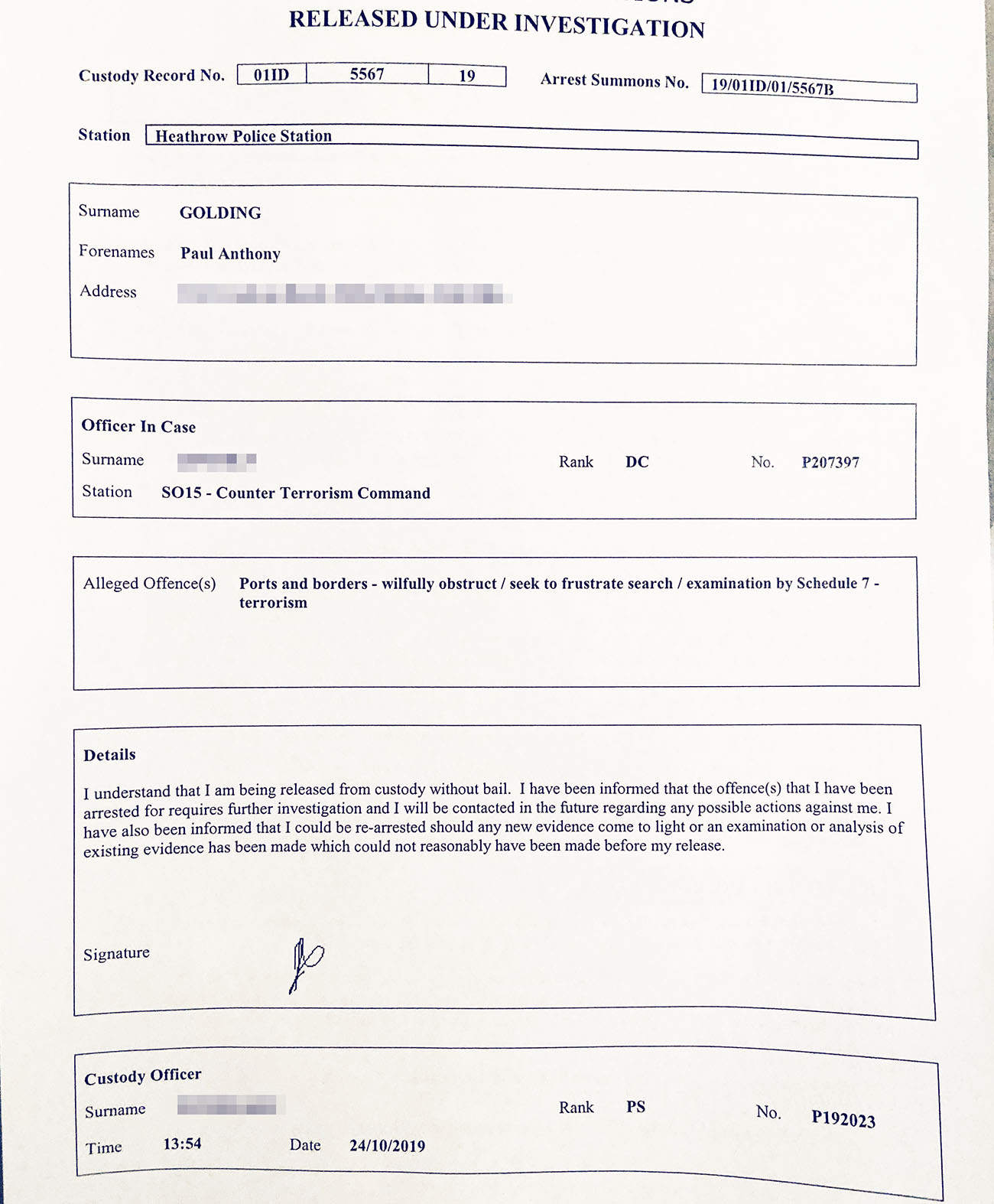 There is no need to worry, as all personal details of our supporters on our HQ database are stored on a military-level online encrypted cloud server.

SO15 carry out these fascist raids on our computer equipment hoping to bring Britain First to a grinding halt.

This is the second time in the last four years they have confiscated everything.

So, we need to urgently replace the computer equipment in our HQ so we can get the wheels moving again.
We cannot let the fascist bullies of SO15 win on this occasion.

We need to show them that we will be back in action with amazing rapidity, despite their sabotage attempts!

Please chip in below with whatever you can afford, every penny counts.

We want to be able to report to Paul that the support is flooding in and we will be back up and running very quickly!

You are not going to believe what has happened over the last twenty four hours!

This is going to shock and disgust you, so be prepared.

As you know, a Britain First team has been in Moscow for the last few days meeting with members of the Russian parliament and engaging in high profile media interviews.

The trip was a great success for our movement, boosting our international prestige and profile.

Unknown to our team, the 'Powers That Be' were very upset.
Early yesterday evening, our team boarded a flight to London Heathrow, completely unaware of the impending disaster.
Upon landing at Heathrow, at approximately 9.30pm, Britain First officers Paul Golding, Ashlea Simon and Timothy Burton disembarked the plane and headed for passport control.
Before they could reach passport control, however, they were all ambushed by an eight-man team of elite ‘SO15 Counter Terrorism Command’ officers and accused of commissioning acts of terrorism!

All three were frogmarched to separate interrogation rooms and threatened with arrest unless they complied with the SO15 officers.

They were held for hours under harsh and draconian powers that only apply at airports under the Terrorism Act 2000.

All three were subjected to intensive and intimate searches of their bodies and belongings.
SO15 is the elite of Britain’s anti-terrorism officers and they are at the top of the tree when it comes to the UK’s security services.

Obviously our team were completely disorientated and in shock at this rather unexpected and savage turn of events!

All three members of our team were questioned and threatened for around three hours, when Ashlea and Tim had their mobile phones seized and they were threatened with prosecution and rapid imprisonment unless they supplied their pincodes.

After this, they were released without charge, minus their mobile phones which were ferreted off for inspection by the SO15 tech labs.

The situation for party leader Paul Golding was very different.

He was threatened with prison and conviction for terrorism offences unless he handed over the passwords and pincodes for his mobile phone, laptop and hard-drive.

The usual ‘good cop, bad cop’ routine was deployed and he was told he would be taken to a nearby police station to be formally charged for terrorism offences, so desperate were they for the access codes for his devices.

He was told he would be charged and sent to prison for at least six months, unless he complied.
The pressure on him was astronomical and resembled a KGB interrogation.

But nevertheless, Paul would not surrender the access codes for his phone, his laptop and his hard-drive.

This was the sixteenth time Paul has been arrested in the line of duty on trumped up political charges, but this time he had elite anti-terror officers detaining him using powers under the Terrorism Act 2000.

This crescendo of threats, bluffs and mind games was designed to make him panic and hand over the codes to his devices.

Paul absolutely and resolutely refused to back down!

He challenged the SO15 officers to take him to court before a judge the next morning.

Unfortunately, under the powers of the Terrorism Act 2000 that apply to airports, the authorities can - without suspicion or reason - confiscate any electronic media or communications devices and if you do not provide the access codes, you are guilty of a criminal offence and can be sent to prison.

After a stand-off lasting a considerable amount of time, with the SO15 officers using every dirty trick in the book, Paul simply told them to do what they needed to do, and to get on with it!

In response, they escorted him a long way through Heathrow to a waiting police van.
He was bundled in the back and taken to the nearby Polar Park police station, where he was booked in and flung in a dingy cell and forgotten about for the next nine hours! 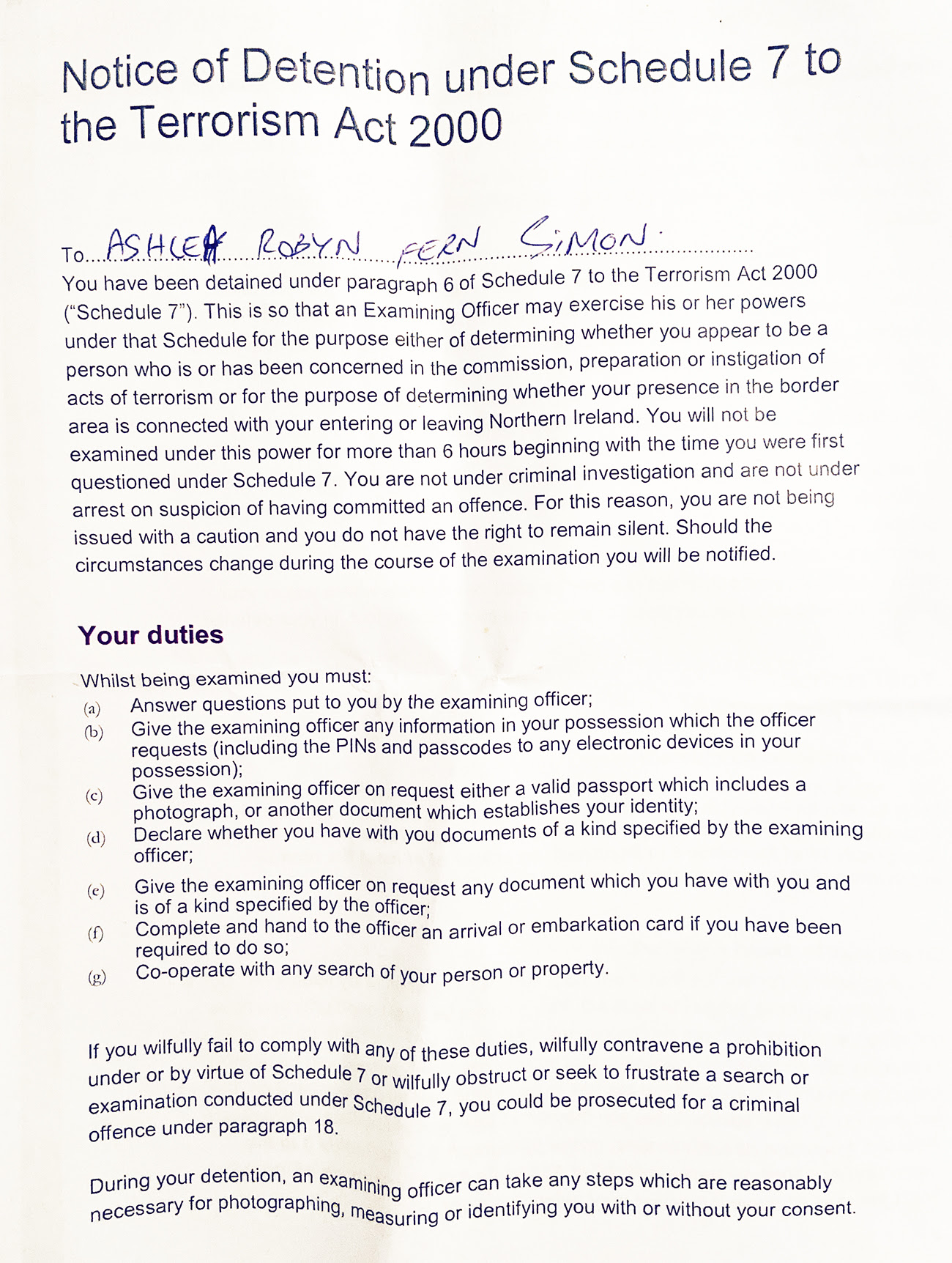 Paul was obviously very distressed by this Gestapo onslaught by the anti-terror police and feared the worst.

After hours of anxious waiting - and grinding boredom - in disgusting conditions, Paul was eventually visited by new officers from ‘SO15 Counter Terrorism Command’.

They subjected Paul to another intensive interrogation and then put him back in the cell for another three hours.
Finally, after an eternity of waiting with nothing but four concrete walls for company, Paul was taken to the custody desk where he was sent home ‘under investigation’.
He was not charged with terrorism offences, nor was he given bail conditions.

SO15 kept his mobile phone, his laptop and his hard-drive and they said they were going to hack them before giving them back.

They also told Paul that they would ring him in a few days to formally charge him with an offence under the Terrorism Act 2000.

Let’s get one thing straight:

Paul is a politician, not a terrorist!

In Russia, he engaged in political activities, such as visiting a parliament and giving media interviews.

How in the name of Christ can any of that bring him under suspicion of organising terrorism?

How can the fascist pigs of SO15 justify this treatment of a politician when there are, in their own words, 23,000 known Islamists and jihadists walking the streets of Britain?

Who gave them the right to seize phones and laptops with no justification?

Who gave them the right to threaten to imprison a politician and his colleagues for not handing over their personal passwords?

Paul, Ashlea and Tim are utterly exhausted by their outrageous ordeal.

Despite this horrendous ordeal, none of them have been charged with any terrorist offences.

This is perhaps one of the worst abuses of anti-terrorism laws this country has ever seen!

A leaflet given to all three of our team members states:
‘Terrorists need to travel in order to plan, prepare and commit their crimes.’
Is Paul Golding a terrorist?
Are poor Ashlea and Tim international terrorists?

The last thing our team members expected was to be ambushed on their return from a perfectly legal and widely publicised foreign affairs trip, and to be detained, interrogated and endure their private belongings being seized because some jumped-up terror cops accuse them of terrorism!

This is a frightening, disturbing and horrific attack on civil liberties and the rights of British citizens.

If this is how they treat three innocent politicians, imagine what the future holds!

But you know Paul Golding and you know Britain First.

We will fight, fight and fight some more and we will not take this disgusting act of fascist oppression laying down!
Paul is expected to be charged with an offence under the Terrorism Act 2000 within the next few days and is understandably nervous about the claims made by the S015 officers.

But Paul is no sissy, he is a British lion who is capable of fighting these b-stards with every ounce of strength he can muster.

I am sure that you are as horrified as we are with the story of what our leadership officials endured in Heathrow endured last night.

HQ is requesting an immediate show of support from all of our members, activists and supporters.

If Paul is charged over the next few days he is going to mount an immediate legal fightback against this oppression.
Terrorism legislation is there to counteract genuine terrorists, not politically incorrect politicians.

SO15 has genuinely overstepped the mark with their diabolical actions last night and we need to swing into action immediately tho show they will not get away with this.
Not only are there serious and disturbing legal ramifications coming shortly, but there are practical things we need to address because of last night.

Paul, Ashlea and Tim are all without phones and HQ is now without laptops, so we need to replace these immediately and that is going to cost at least £3,000.
Last night marked a serious escalation in the establishment’s war against political freedom fighters and dissidents.

Paul is going to rest tomorrow, completely exhausted by his ordeal, so we need to show we are behind him - and Ashlea and Tim - 100%.

They are heroes for what they endured last night at the hands of the SO15 brutes.

Please chip in with a small donation below and show Paul, Ashlea and Tim they are not alone:
https://www.britainfirst.org/donate

Yours sincerely,
Britain First HQ
[ends]
Posted by butlincat at 4:19 am