Posted on February 20, 2020 by Maurice Kirk
A month ago my 10 year running 1CF03361′ Trading in Machine Guns’ civil claim was in yet another welsh judge with his speciality in avoiding an independent police enquiry of multi-million pound fraud by Dolmans solicitors, the proceeds of which are already earmarked for similarly corrupt senior police officers. The QC for the Chief Constable was a Mr Lloyd Williams QC while senior dolmans partners included Adrian Oliver and Melanie Stanley.
His Honour Judge Andrew Keizer QC, presiding, caused the audience from all around the UK.in the public gallery, some new understanding as to the level of unabated criminal conduct by both senior police officers and Dolmans.
The unfortunate video, below, filmed after a somewhat ‘liquid lunch’ in the Prince of Wales pub in Cardiff, after yet another hearing to deliberately delay ‘disclosure of facts’ and prevent exposure of the truth is , at least a warning to the new reader should he or she dare enter a welsh court and be expecting a ‘level playing field’.


The incriminating data of the police/Dolmans multimillion fraud, in order to hide their 50 odd failed malicious criminal prosecutions is currently snatched on police orders and remains in Parc prison Bridgend. Remember, concocted against me (BS614159 etc) to have me either shot and if that failed, sectioned for life in Ashworth’s high security psychiatric prison, is all in my 1st machine gun draft of ‘particulars of claim’, in May 2010, filed in court 10 years ago and will appear on this blog once I have mastered the technicalities

My Medical Records Police MAPPA Confiscated TO Hide Their Crime


I am grateful for your seeing me concerning the police denying my Taunton GP my medical records.
My recent blog extract, below, on the decades of suffering under ‘South Wales Police Corruption’, affecting so many, points to proof of rampant criminal conduct when accountable to no one:


Re-elected Taunton MP, Rebecca Pow, inadvertently caused my imprisonment in March 2019 for seven more months and only released due to the fortunate intervention by a clearly irate HM Parole Board member from London that had been lied to for two hours with my sister witnessing it all.
The Chief Constable of South Wales Police had not only allowed the fabrication of seriously damaging criminal convictions, to cause me hell in his police controlled Parc, Bridgend prison but had also ensured the list included ‘child abuse’, ‘firearms’, ‘ABH’, FTA and ‘narcotics’! Police convinced my parole officer that I had sent to Stoke St Mary village, Taunton, possibly deadly anthrax spores in a prison cell letter causing it to have the village cordoned off from the public!
Would this ongoing conspiracy have anything to do with the then Barbara Wilding’s emergency 2009 MAPPA level 3 Category 3  ‘Operation Chalice’  meeting in Barry police station on the 8th of June in order to register me amongst the top 5% most dangerous in the UK in order I may be shot?
When an armed police helicopter, with 20 odd officers, had raided our house in St Donats, while we were enjoying afternoon tea in the garden with the springer spaniels, why was I then NOT arrested?
Was this to do with my being set up to be ‘shot’ (see leaked MAPPA category 3 memos) or their failed attempt (Operation Dandelion) in snatching our 10 year old daughter, Genevieve, to forced council care? It was to try and stop my civil claims, BS614159 etc, following the police’s 50 failed malicious prosecutions often denying me liberty during those decades of deliberate persecution.
South Wales Police Corruption ‘Ups a Notch’
I am arrested at my Cardiff veterinary surgery for theft of my own motor bike and gaoled in Cardiff prison for 4 days.
Poloice concoct charges of being in possession og a ‘garrotte type instrument in the pannier (embriotomy wire used on cattle dehorning on HRH Prince Charles farm and from ‘assaulting PC Philips who had thought I was possibly an escaped psychiatric patient.
This wicked police interview was deliberately withheld from all my civl proceeding for compensation with the final presiding judge refusing disclosure of any of the substantivre trial court records as they covered over 50 failed malicious criminal prosecutions. This tape was leaked revealing the level of SWP routinde corruption for which they are k nown world wide.
Police interview  20th May1993
Would it have had anything to do with the police then transporting my decommissioned WW1 Battle of the Somme Lewis machine gun 2000 miles around the UK, contrary to s5 of the 1968 Firearms Act, had they not, first, unblocked the gun barrel and having her painted a different colour to fool the jury to secure a mandatory 10 year prison term for ‘trading in machine guns’?
Who out there on cyber space would like a copy of the official machine gun trial transcript for a view on the trial judge , PAUL THOMAS QC, to see how internal ‘taffy politics’ command my destiny?
[South Wales Police ref 1900195556 ‘alleged Heroin sent to Alun Cairns MP’] [I900180883 ‘alleged anthrax spores to Rebecca Pow MP]. To whom do I complain?
source: https://mauricejohnkirk.com/2020/02/11/successive-cardiff-judges-completely-ignore-this-basic-law/ 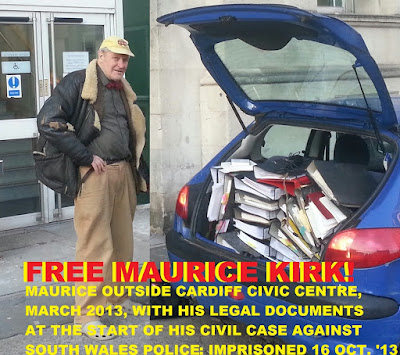 lots of docs...but not the ones he needs that are refused