With his latest film, Ex Libris: The New York Public Library, currently in cinemas, we take a tour through the career of one of cinema’s greatest documentary makers.

As Errol Morris once quipped of the  Boston-born, Jewish-raised Frederick Wiseman: “Fred likes institutions like Fellini likes the circus.”

In his half-century career as a documentary maker, Wiseman has tirelessly charted American institutions and communities, with a style that’s often reductively described as flat, fly-on-the-wall vérité. As a result, compared to more famous auteurs, Wiseman gets short shrift as an ‘invisible’ presence behind the camera – or he’s mischaracterised as a dry descendent of the 60s Direct Cinema documentary movement.

Yet the man himself has always argued that his often lengthy movies are more novelistic than journalistic, and indeed, several of his films have been transcribed and republished as screenplays.

His primary passion is the theatre, but his cinephilia was carved in the experimental early 60s, when he quit law school to produce Shirley Jackson’s Harlem-set The Cool World (1963). And when asked about political affiliations, Wiseman replies: “My political models are Groucho, Harpo, and Chico.”

Outside of film festivals, Wiseman’s work has sadly not been easy to track down. But its recent issue en masse as a series of DVD boxsets by the boutique label Blaq Out, and now the cinema release of his 42nd feature, Ex Libris: The New York Public Library, make this the perfect time to explore Wiseman’s output.

Here are 10 of the best places to start. 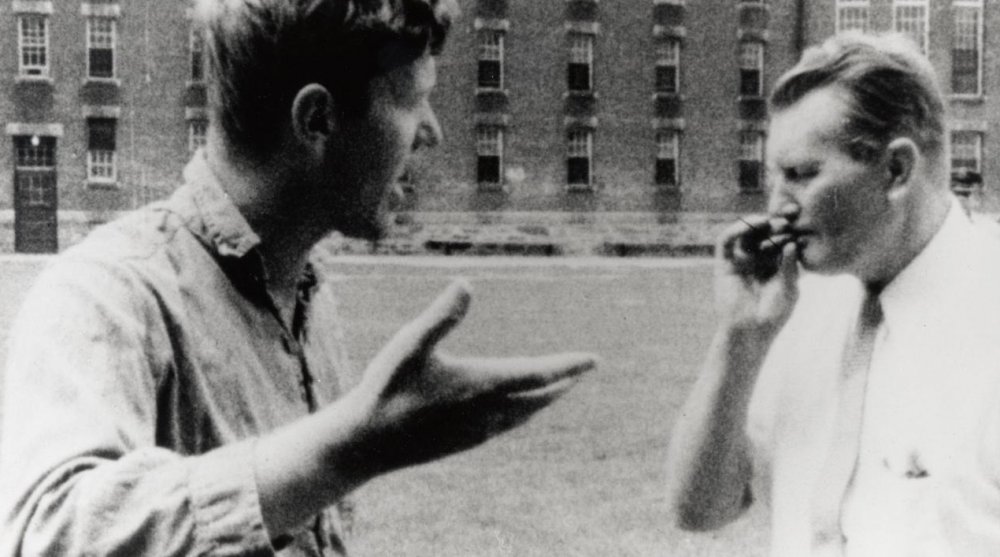 Wiseman’s first feature film was almost his last when the Massachusetts Supreme Court moved for an injunction against its release. They won the theatrical battle, and it could only be screened privately for medical professionals until 1991. Filmed at the Bridgewater State Hospital for the Criminally Insane, Titicut Follies’ catalogue of abuses remains harrowing to this day, particularly in a scene where wing staff mentally torture a disturbed inmate about cleaning his room; but upon returning to his quarters, the space appears spotless.

The title refers to a musical performance that opens the hospital’s annual revue and the film itself, establishing Wiseman’s obsessive interest in theatre. 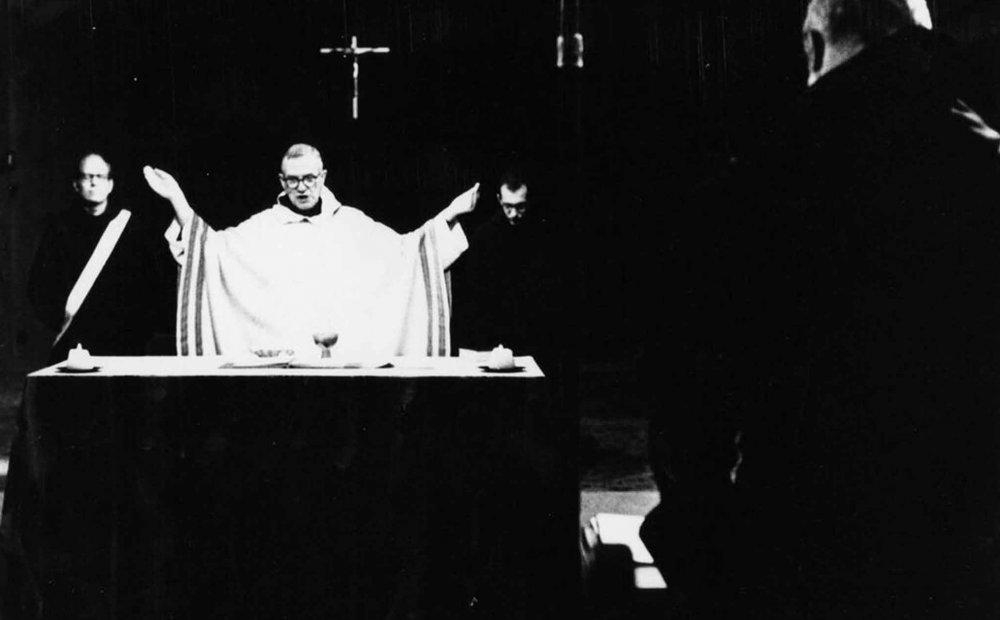 In contrast to the oppressive rigour of Wiseman’s earlier subjects – including High School (1968) and Basic Training (1971) – this investigation into an organised social structure is tender and serene, revolving around the activities of a Benedictine monastery. In one beautiful scene we hear a Japanese monk asking his brothers to pray for the innocents in Hiroshima; later, a plain-clothes monk heads into town to buy a potato peeler.

Essene is particularly striking as a secular film about the deep inner workings of religion, and its points of emphasis undercut any chance of polemic. There’s no crisis of faith here, but instead a debate about the etiquette of monks addressing their brethren by first name.

Among Wiseman’s funniest films – “a riot,” he deadpanned – Primate is also one of his most chilling. At the Yerkes Primate Research Centre, Wiseman fixes his camera behind rows of chain-link fencing, stuck at a hopeless impasse between the humans’ total lack of empathy and monkeys stripped of their agency. At a boardroom debate about artificial insemination, the director turns a conference into a playpen, zooming-in on scientists yawning, picking noses and jutting their jaws in boredom (by a lovely coincidence, he also happened to be filming during a particularly hirsute decade). For the finale to this grotesque circus, Wiseman turns to a real-time squirrel monkey dissection. 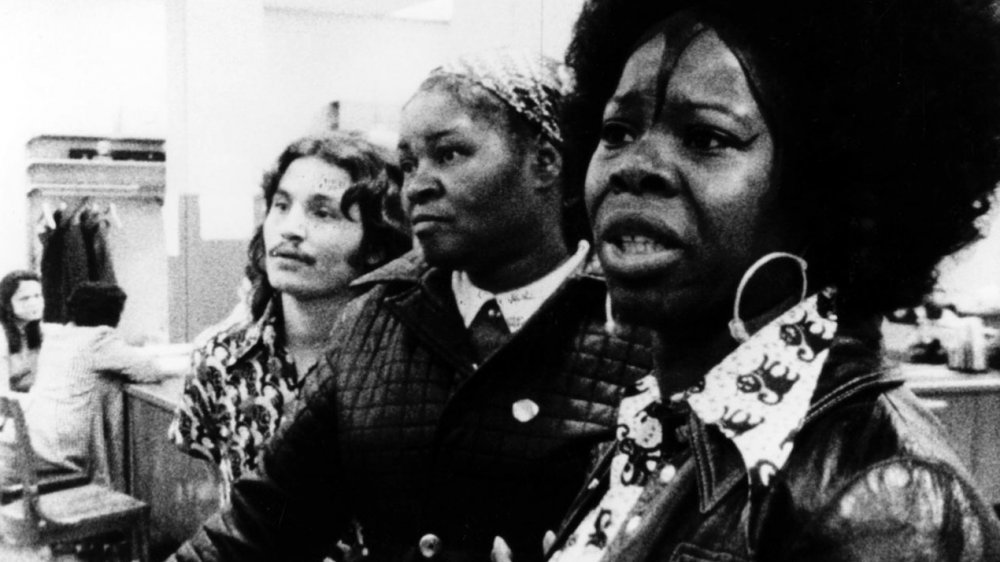 Strung out between Five Easy Pieces (1970) and The Driller Killer (1979), Welfare is one of the great movies of American existentialism – a Sisyphean dispatch from the broken frontier. As Barry Keith Grant writes in 5 Films by Frederick Wiseman, his films are alive with “what Emerson called the ‘primal warblings’ of the American people,” and in a New York welfare office Wiseman found some of the most guttural, enervated voices of his time.

The director’s love of theatre re-emerges in the final scene, when a desperate job seeker monologues about the collapse of the United States: “by 1988 there will be nobody here worth saving.” 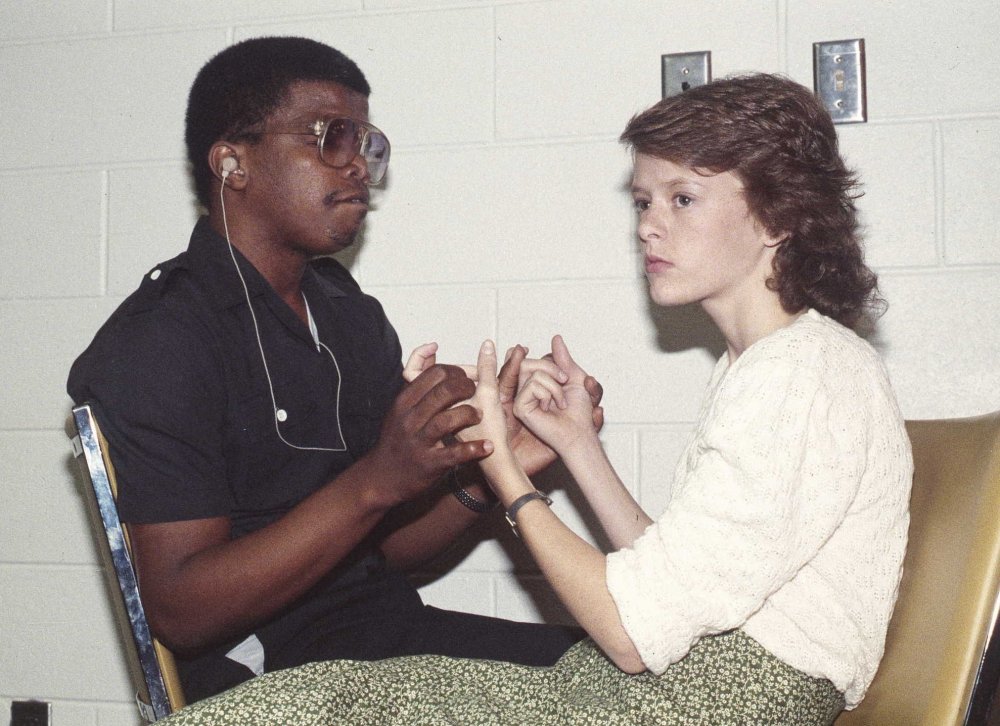 Part of a four-film cycle shot at Alabama’s Institute for the Deaf and Blind, Multi-Handicapped concentrates on the sensory impaired students at the Hellen Keller School. As academics Sharon Snyder and David Mitchell write, this cycle – also including Deaf (1986), Adjustment and Work (1986) and Blind (1987) – “take up general categories of disabled populations as discrete documentary topics… as opposed to a specific location in his earlier films”.

They also deepen a recurring theme for Wiseman, as he explores the communication between bodies in space. His sensitivity toward comportment and gesture as a means of relation are proof that his camera is always looking, and never simply sitting in attendance. 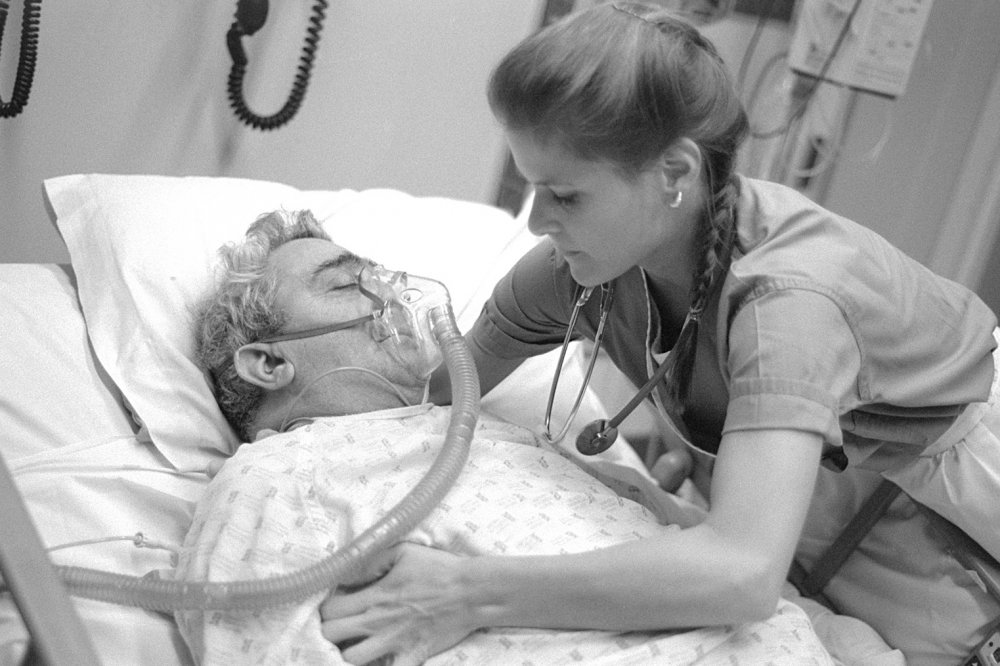 Wiseman’s most infamous film – a six-hour plunge into the corridors and sickrooms of Beth Israel Hospital’s intensive care unit – reads on paper as a cinephiles-only misery-a-thon, but the director’s points of emphasis are always surprising, stretching from the humane to the absurd.

Rather than a film about dying itself, Near Death is more about the language and tools we employ to deal with death – the frightened lexicon of medicine, and its timid machines delaying the inevitable. It’s perhaps Wiseman’s most anthropological film, questioning how we can ever parse the reality of death, and bringing us closer to the people who are tasked with its explanation and delivery. 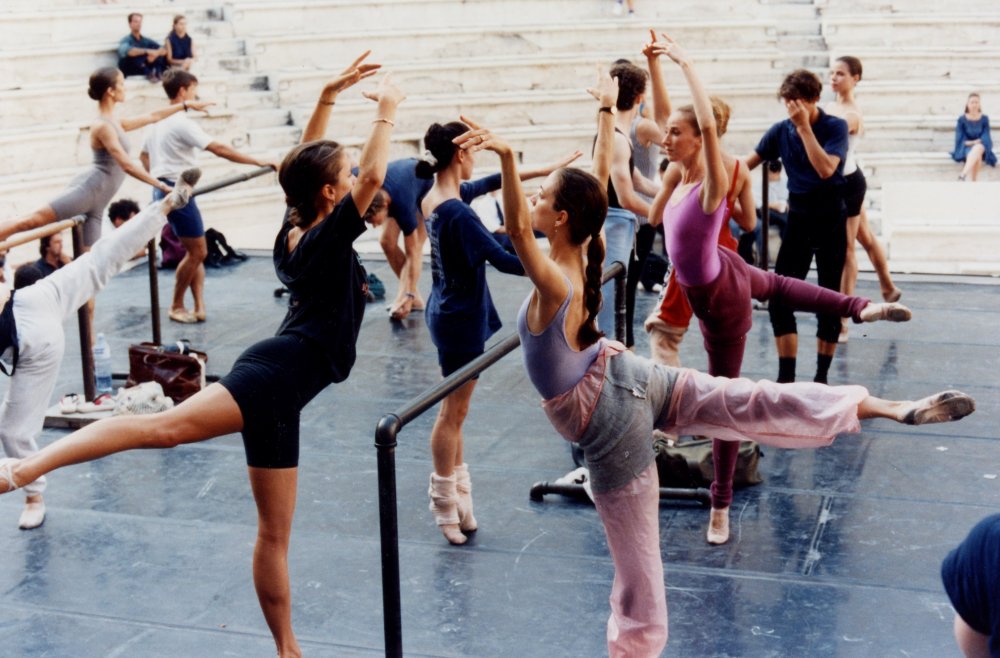 With otherwise only brief interludes in boardrooms, the film’s first two acts centre around choreography and rehearsals for the American Ballet Theatre’s 1992 season, but its final hour is among the loosest, most beautiful passages in Wiseman’s career: a coming-of-age miniature as the theatre’s young company tour Europe (Greece, then Copenhagen), mucking around at theme parks and beaches between performances. 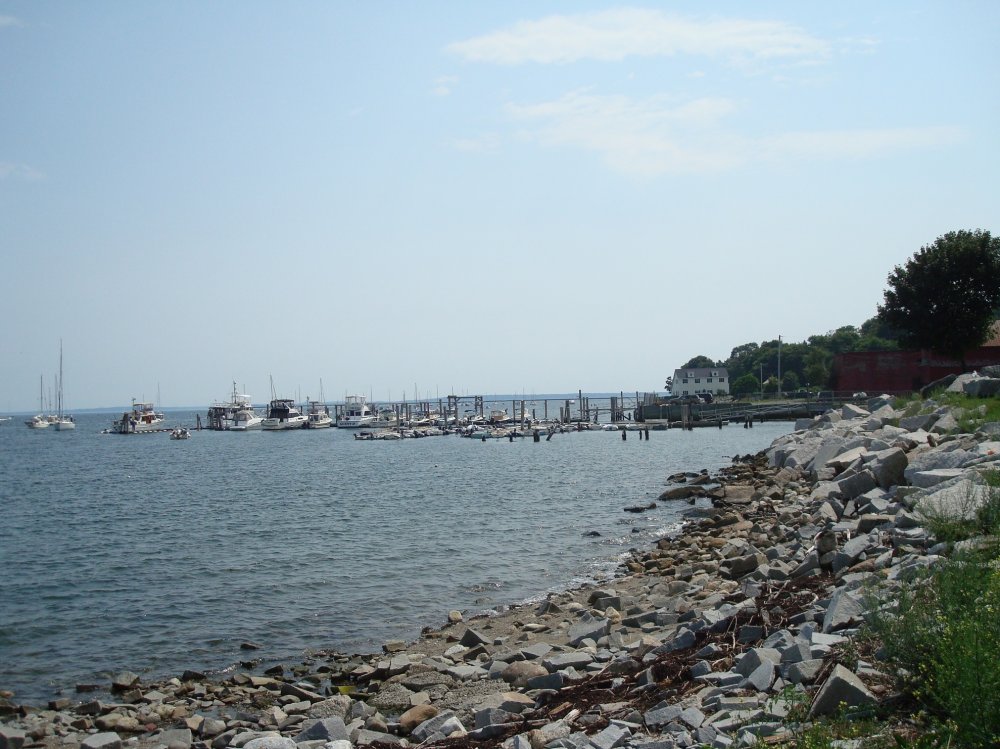 Aside from his widely acclaimed institutional series, Wiseman’s second largest project has been the documentation of micro-communities, from housing projects (Public Housing, 1997) to recreational spaces (Central Park, 1990). The greatest of these films is Belfast, Maine, a warming, toes-under-the-carpet portrait of a modest New England port city.

It may sound simple on the surface, but just as Welfare captured Emerson’s ‘warbling’ Americans, this film unfurls like (in Michael Blowen’s words) “a cinematic Thornton Wilder”. Wiseman draws the small regionalisms out of Belfast with a deep sensitivity, suggesting as many stories through architecture and accents as he does the wide variety of activities – lobster fishing, factory work, council meetings – he assembled from 110 hours of footage. 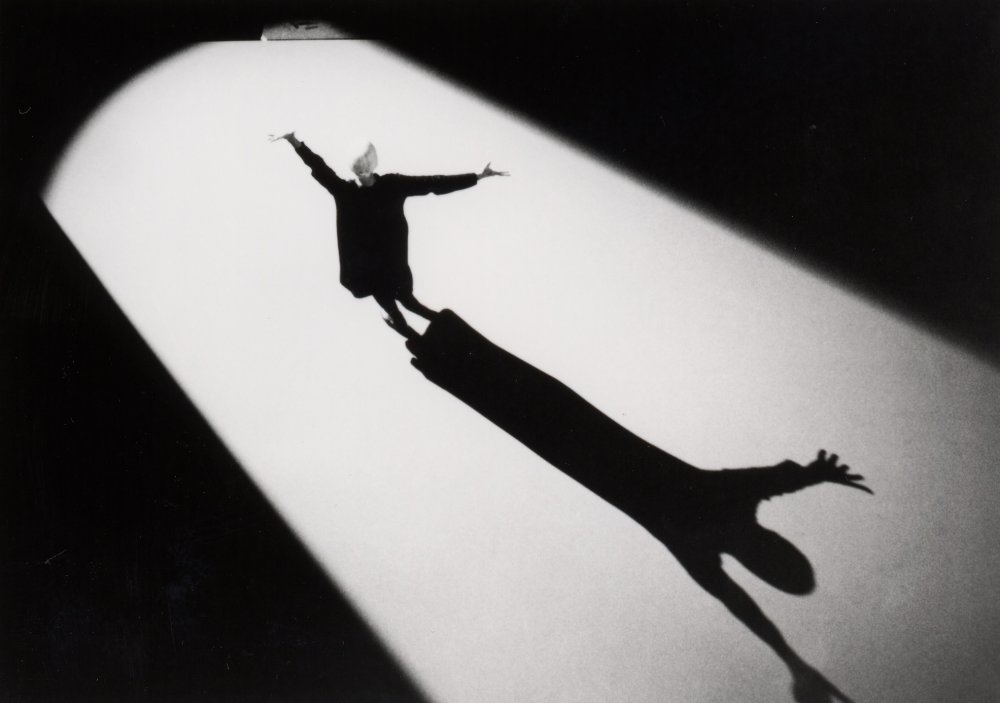 Adapting his own stage production of a chapter from Vasily Grossman’s Life and Fate (1960), The Last Letter is Wiseman’s second fiction feature, and the most startling: an hour-long, French-language monologue about the experience of a Ukrainian physician as her ghetto falls to Nazi occupation.

The dialogue, performed by La Comédie-Française’s Catherine Samie, is an incredible reflection on the fear and courage of Wiseman’s own ancestors – the director’s father was a Ukrainian immigrant; his mother Polish. The piece is staged on a stark, expressionist set – Samie is surrounded by interrogating, Langian shadows – and so The Last Letter is also Wiseman’s greatest cinematic statement on the theatre. 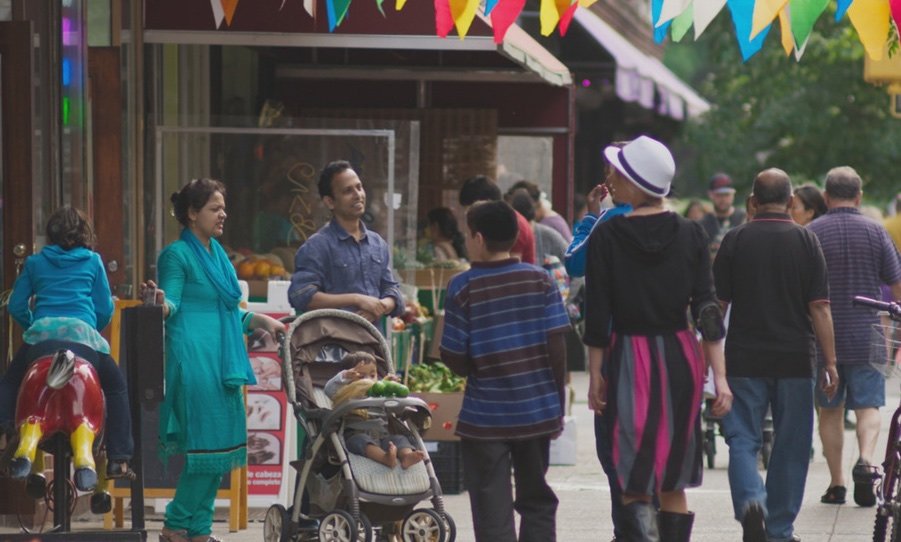 The politics of Wiseman’s films are usually shaped in the moment of their reception, rather than their making, and so his vibrant portrait of Jackson Heights – one of the densest cultural melting pots in New York – has only grown in resonance since 2015.

Wiseman’s camera shuttles from the Jewish Centre on 77th Street down to Little Bangladesh on 73rd, and locates a microcosm of modern America along the way – although his modest, street-level reception of citizens and their stories asserts no greater claim than simply ‘hanging out’. The seriousness of a film like In Jackson Heights during Trump’s administration is undeniable – but look to the scene of would-be cabbies learning New York geography for the influence of Groucho, Harpo and Chico.

5 Scary Documentaries You're Banned From Watching That'll Give You Chills

Top 5 Unknowns
►NEW CHANNEL: https://bit.ly/2NFY2lT ►FACEBOOK: http://bit.ly/TheRealTop5U ►SUBSCRIBE: http://bit.ly/Top5unknowns In a time where answers are just a swipe away, how will Governments rise to the challenge of banning and censoring media that may have devastating consequences to its audience? In the past, this was not so much of an issue but in the age of social media and streaming, it remains to be seen how they will cope. Previous Videos: https://youtu.be/lexEdKVwS1g https://youtu.be/-IH0PnzC36A Written By: Emma Narrated By Ty Notts: http://bit.ly/ty_notts Music By: COAG
Posted by butlincat at 11:35 am